The app store will not only let physicians and healthcare providers prescribe apps for their patients, but also send the app directly to their patients via secure email and SMS text.

It will also have the ability to track app usage patterns and provide feedback to physicians. Physicians can curate their own apps into app formularies based on their preferences and their patient populations.

This software-as-a-service platform, AppScript, will allow providers and institutions to identify patients, create their own formulary of apps, and install apps from a unified launcher on the patient’s iOS and Android device. Providers can recommend their own favorite apps, their hospital or clinic’s apps, and see a ranked list of apps based  a proprietary IMS Health App Score. IMS Health is allowing any developer to publish their app on their platform for free. 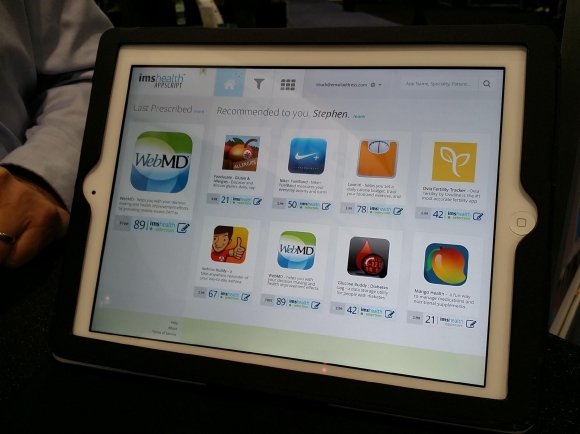 “When we look at mHealth…we think that there’s a lot of experimentation and investment, but mHealth hasn’t really been industrialized,” says Stefan Linn, IMS Health’s Senior Vice President of Strategy & Global Pharma Solutions, in an interview with iMedicalApps. “There’s not as much of a robust infrastructure to measure the outcomes of these apps. Apps should be judged by how well they drive costs and patient outcomes, and with all of these apps, it’s hard to identify the right apps for these patients. A lot of apps are missing features around communication, security, and don’t [even] do very well what they intend to do.”

AppScripts will also score each app from a variety of objective and subjective factors. Each composite score uses a proprietary formula based on their prior research of 40,000 apps, physicians’ reviews of the app, patients’ reviews of the app, stability, certifications, long-term outcomes, and security. Stephen Buck, IMS Health’s Product Manager, notes that this provides a richer clinically-relevant score than, say, the iTunes, which is largely based on popularity. 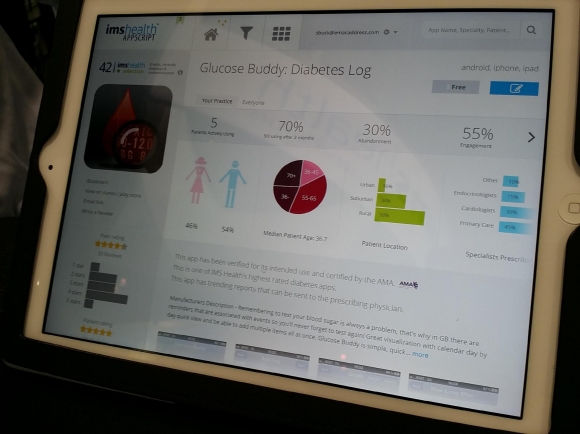 “[When getting mHealth apps from] iTunes, it’s a beauty contest. It doesn’t have scientific evidence that physicians [need],” adds Linn. “What we’re doing here is…bringing [app curation] to a level of scientific acceptance.”

IMS Health, a major worldwide provider of information services, will also provide the AppNucleus platform as a proprietary software development kit (SDK) and API–similar to Google Play Services and iOS’s various frameworks–with mHealth-ready architecture and HIPAA/HITECH-compliant security features that protect patient health information. The API will include built-in solutions like surveys, personalized health record (PHR), and secure encrypted messaging. The company is offering a free trial; no word yet on pricing for the license.

The for-profit company has worked closely with the University of California, San Francisco (UCSF)’s Center for Digital Health Innovation. The institution has piloted the software and tested it for use with their own physicians. IMS Health’s business to date has largely incorporated 10 petabytes of de-identified patient data from over 1,000 data suppliers for use by researchers, government agencies, pharmaceutical companies, in order to analyze outcomes, treatment costs, and interventions. This particular platform extends IMS Health’s reach into the fragmented but booming mobile health app & device market.

Steven Chan, M.D., M.B.A., is a resident physician at the University of California, Davis Health System, researching psychiatry, telemedicine, mobile technology, & human behavior. Steve previously worked as a software and web engineer as well as a creative designer at Microsoft & UC Berkeley. Visit him at www.stevenchanMD.com and @StevenChanMD.