The UK based Open Hand Project, which aims to make advanced prosthetic hands more accessible, has surpassed its goal of raising $63,000 on Indiegogo.

Once the robotic hand has been fully developed, the creator intends to make the plans open source.

Robotic hands can cost tens of thousands of dollars, the goal of the of the Open Hand Project is to make them much more affordable and accessible.

The robotic hand is made of 3D plastic parts and is rubber-coated. It can also connect to an existing external prosthesis as another option. It is operated via stick-on electrodes which read signals from remaining muscles that can control the hand telling it to open or close. Fingers are individually powered and can each sense when an object is impeding its movement. This gives the user the ability to grasp objects gently allowing for the fingers to wrap around unusual objects and to provide a firm grip.

A fully working prototype has already been built. Core electronics have been bread-boarded and the software has already been prototyped. The creator continues to work on a refined, finished product that is more mobile and polished. As part of this process they will design the prototype and electronics which shall be printed onto circuit boards. It will also be tested for functionality and robustness and made more aesthetically pleasing.

The Open Hand Project intendeds to make the robotic hands accessible to children once the adult version is complete. Children need a new hand every year or two as they grow, but the cost of robotic hands are a major barrier to replacements–even ownership of a robotic hand to begin with. The ability to print 3D parts allows for parts to be replaced each year at a fraction of the cost in order to make the hand larger each time. 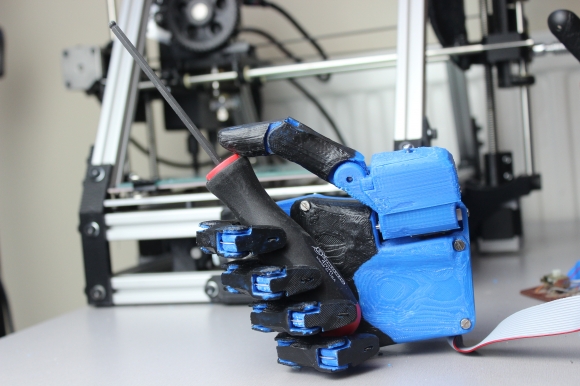 Being open source and having the ability to make parts through 3D printing allows for the Open Hand Project to cut down on the cost of robotic hands dramatically. 3D printing is widely available and allows for the creation of almost any three-dimensional shape out of a digital model. This is done via an additive process that incorporates laying down successive layers of material in a series of cross sections corresponding to the cross sections of the digital model. As an open source project, any developer around the world can use the designs and sell the hands, potentially avoiding import taxes.

The hand will be available in three versions: a prosthetic version, one aimed at Universities and research institutions, and another aimed at hobbyists and people who want to connect things to it and be able to control it from a computer. The Open Hand Project is intended to last a year, and they plan for a the robotic hands to be available for under a $1000 each.