Angel is a health and fitness monitoring device that is open source.

It has raised almost $300,000 through a campaign on Indiegogo, blowing away its initial goal of raising $100,000. Angel is designed with developers in mind.

By being open, they hope to encourage developers to create new and innovative health and fitness trackers and provide consumers the freedom to choose any apps they would like.

The device monitors pulse, temperature, activity and blood and oxygen level and can share data with other devices via Bluetooth technology. Currently, Angel shares data with apps on smartphones, laptops and soon treadmills. This data can be used in a wide variety of applications. Some of the current applications already created by developers include a workout tracker, sleep monitor, fertility calendar and a golf trainer. It is already compatible with some popular fitness apps including Endomondo, RunKeeper and Strava.

The device gives access to real-time raw data for all channels, providing developers with the data needed to create fitness and medical applications. This data can also be used for medical research.

Angel ships with Foundation apps for device configuration and user access and is compatible with iPhones and Android phones through Bluetooth. It has a built-in real-time clock, configurable alarm clock, LEDs, a vibrating motor, buzzer and detects hand gestures. 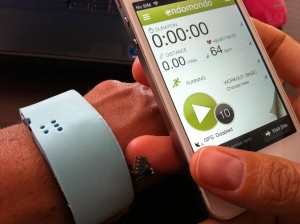 Angel’s developers have worked almost two years on the device and currently have an engineering prototype designed to calibrate and optimize their technology. With the funds raised, they hope to take the device into its final developmental stages and enter the manufacturing process. No medical claims are currently made by the developers but they hope to eventually obtain FDA approval so that Angel can become a medical grade device. The creators plan for the device to be available to market by April 2014 for $135.