The next frontier, attaching health sensors directly into your smartphone

A month ago I saw a video on Youtube about creating modular smartphones, created by Phonebloks. Phoneblok puts forth their idea that such a product could reduce waste, and allow highly customizable products for smartphone users who utilize their phone for different purposes. In essence, this platform moves beyond a modifiable user interface that focuses on apps, and focuses on a system with modifiable hardware to supplement those apps.

While the premise was interesting, I did not give it much thought due to the fact I could not envision any smartphone developer investing into such a product. Needless to say, I was wrong since Motorola has announced it will be creating modular smartphones with its Project Ara. Motorola’s idea is to create an endoskeleton that will provide the key components of a phone with modules that may be attached.

Such a modifiable phone would allow users to create a phone that will be tailored to their primary user preferences. For instance, someone who may like to take pictures with their phone could invest in a better camera module and more storage to keep the pictures.

However, I see such a development as the next step in creating a smartphone that can serve patients and the medical community to a greater extent than currently available. While many have recognized that smartphones are changing healthcare, it has–until this point–relied on the ingrained apps available or peripheral accessories that work with a phone.

A modular phone could, in essence, make it possible to completely remove those peripheral devices reliance on indirect connections and be directly incorporated into the phone itself. For example, I have created a mockup of a modular piece that could measure EKG’s. Taking, for example, the currently available product AliveCor, it could be transformed into a module that could directly connect to the phone, therefore bypassing the need of an external battery source and feeding data directly into the phone itself. 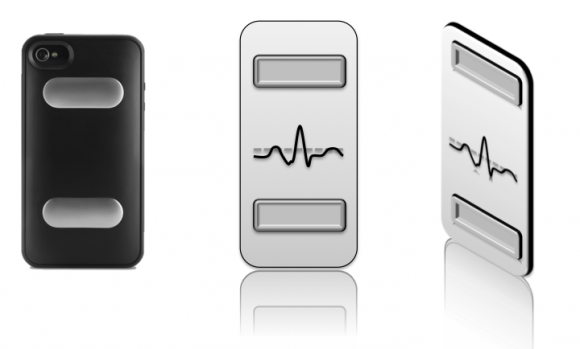 The same could be done with a number of other currently available products. For instance, iBGStar could become a module that is directly attached to the phone. Personal fitness trackers could become modular devices that attach to the phone, are recharged, and then attached to the body. This could be beneficial for those that may have their phone in their pocket and want to check their steps, but take off the module for a swim or other activity where having a phone may not be well suited.

In addition, Scanadu could become a module and attached to the phone as well, allowing temperature, pulse oximetry, and heart rate to be measured. 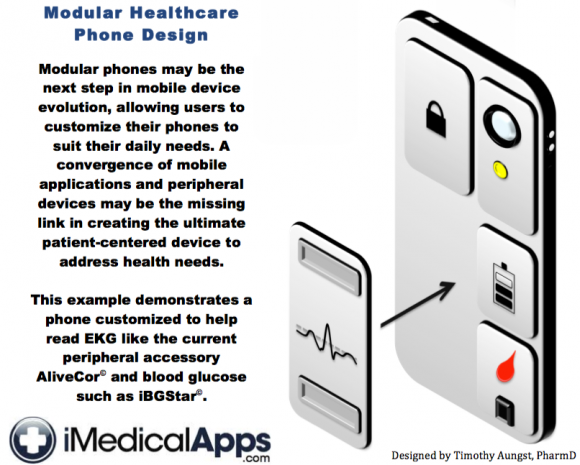 For a more clinician centered device, modular pieces that fulfill diagnostic activities could be created. Imagine if an ultrasound module could be created, or if other diagnostic handheld tools could be turned into modules. In essence, a real life Tricorder could be made and incorporated into care.

Overall, a modular smartphone could pose the next step in mobile technology. Shifting focus from pre-built devices, that have practically stagnated in terms of development and novelty, a push for a highly customizable device could create a revolution in smartphone technology, and in medicine.