Popular Epocrates Bugs & Drugs App used by Physicians is flawed, should be removed from App Store

Infectious disease (ID) is  a difficult topic for many clinicians to handle.

Inevitably, questions arise such as what is the best treatment for a certain infection, how much and how long should I prescribe treatment, and what should I monitor for?

This becomes all the more important as we enter an era where antimicrobial resistance has become all the more apparent, fostering such resistant pathogens as Methicillin-Resistant Staphylococcus aureus (MRSA), Vancomycin Resistant Enterococci (VRE), and Extended spectrum beta-lactamase (ESBL) organisms (1).

Indeed, it is a scary world where multidrug resistant pathogens may kill individuals that would have otherwise responded well to similar treatments in years past.

As a pharmacist, seeing the resistance build-up to our medications is a worrisome problem, and further emphasizes my belief in antibiotic stewardship programs to use antibiotics responsibly in practice (2).

With that being said, the recent release of Epocrates Bugs + Drugs caught the attention of iMedicalApps as an app that appeared to be a real-time antibiogram. While most hospitals and networks utilize an in-house antibiogram to identify what organisms are susceptible to what antibiotics in that locale, it is reliant on their own in-house testing of isolates and is only updated every so often.

Recently, Epocrates has joined with Athenahealth to tap into their cloud-based EHR to access the pathogen susceptibilities from isolates identified from their large database in real time. In addition, the medication options are then linked to Epocrates drug information to give clinical data on treatment for susceptible infections. Using mobile applications to help providers prescribe the best treatment course for patients facing an infection seems to be a great example of how we can use such mobile references in daily care. 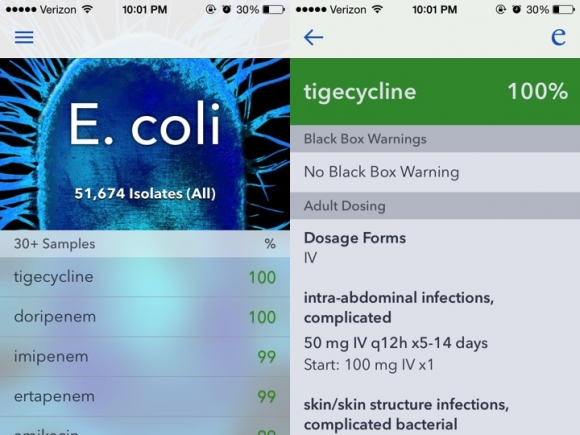 In theory, this is a great idea. We will say that again: In theory, it is a great idea. The app released is just beautiful, and if we had to make an app that encompasses the functions of an antibiogram, I do not think I could have done it any better; however, while look and functionality are key components of an app, the content of an app is what really matters, and that is where Epocrates has made significant errors in several areas.

First, the initial release of the app was plagued with completely incorrect information. As seen, the app identified several organisms as susceptible to antibiotics that make no sense pharmacologically. For instance, ertapenem should not be used for Pseudomonas aeruginosa. 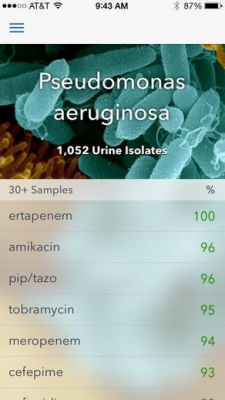 After a break out in their comments and reviews on the iTunes App Store and in Twitter by multiple clinicians, it seems that Epocrates has revised several of these errors finally (October 12 update), perhaps after grabbing a copy of the Sanford Antibiotics Guide. 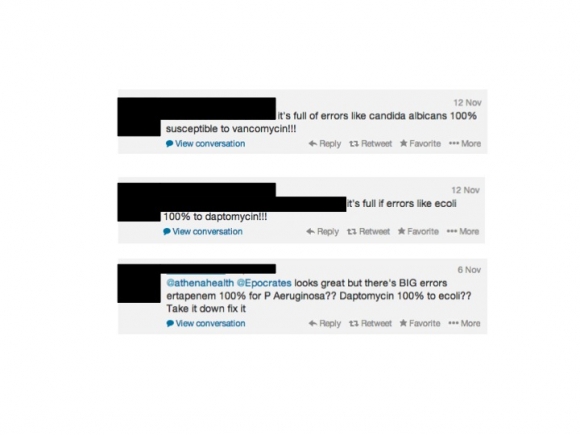 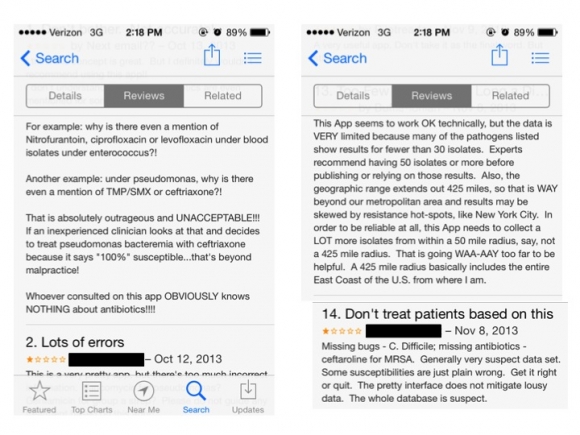 Next, pulling two hospital anitbiograms, I compared the sensitivities based on those institutions with the data based on the Epocrates app. As seen, there is a great disparity between the data sets. At first, it seems to follow institutional data similarly, but then completely diverges. In addition, the quantity of isolates are paltry in certain situations, which detracts from the value of the information provided. If less than 30 isolates are present, the susceptibility may not be that beneficial for making a clinical decision. 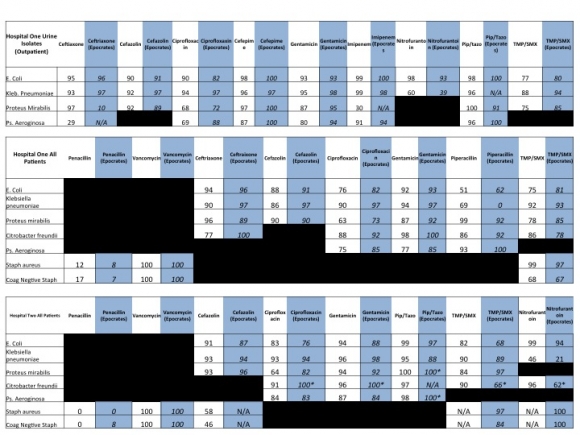 Additionally, the Epocrates app did not address certain infections that may be a concern, such as the so called ‘superbugs’ (e.g. MRSA, VRE, ESBL) or other pathogens such as Clostridium difficile. This goes against what Epocrates is advertising with their Superbugs spotted in the wild: Are they lurking in your area?

Lastly, it can be seen that the app is claiming susceptibilities of “100%” for some pathogens that really make no sense whatsoever. This is especially the case in pathogens where we know that resistance is relatively high and the susceptibilities percentages put forth by the app just seems clinically wrong, as seen in the image below, with Staph. aureus showing sensitivities of 100% to vancomycin.

Does this include isolates of MRSA, MSSA, and just Staph. aureus? It is very hard to determine. There are still other drugs that, while demonstrating no susceptibility in the app, should probably not be included, such as ceftriaxone under Pseudomonas aeruginosa.

Digital Pharmacist seeking to integrate technology and mHealth into pharmacy practice and patient care. Assistant Professor by day, blogger and writer by night.