Testing the Nexus 7 versus my iPad in the hospital setting

Over a year ago, our editor-in-chief Dr. Husain conducted his review of the Nexus 7 and noted that while it was a device that could find a niche in the hospital setting, there were several areas of concerns that prevented adoption.

Namely, the low number of available medical apps that are only on iOS devices.

Personally I loved my first generation Nexus 7 Tablet, and hoped to conduct reviews of Android apps with it; that is, until it overheated and stopped working.

This was no standalone incident either, as physician writer Brittany Chan’s Nexus 7 also overheated and stopped working.

Maybe we were early adopters with faulty products. Nonetheless, with my warranty intact, and the second generation released, I decided to give the new Nexus 7 (32GB) a chance, and document my experiences with the device for the past few months.

Overall, the changes were not drastically noticeable. I can appreciate the faster speed compared to the first generation, and the device seems to run smoother without a noticeable lag that I experienced prior. The display quality is definitely improved, but does not compare to my Retina-display iPad.

Perhaps the change that most impressed me was the smaller form factor, as the device is noticeably lighter and smaller than the first generation, while still maintaining the same screen size. The addition of a back-facing camera (despite the poor 5 MP quality) was appreciated and added some utility I had missed. Overall, the fact that the device has improved and still maintains such a cheap price ($269) was impressive. 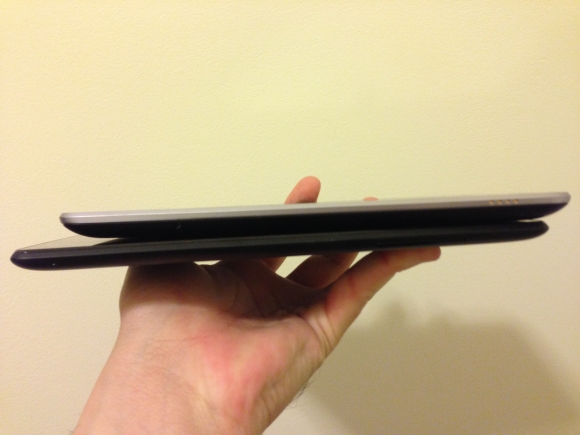 However, several areas have caught my attention. The response to touch on the first generation was an issue for me, as often the device would misinterpret many of my inputs. I had hoped this would be resolved in the current iteration, but as others have noted, that is not the case.

Secondly, the battery seems to drain faster than I remember, though this could be due to my increased utilization. I just hope it does not fry on me like the last one. Lastly, I miss the grip feeling on the first generation device, that made it just seem easier to hold. 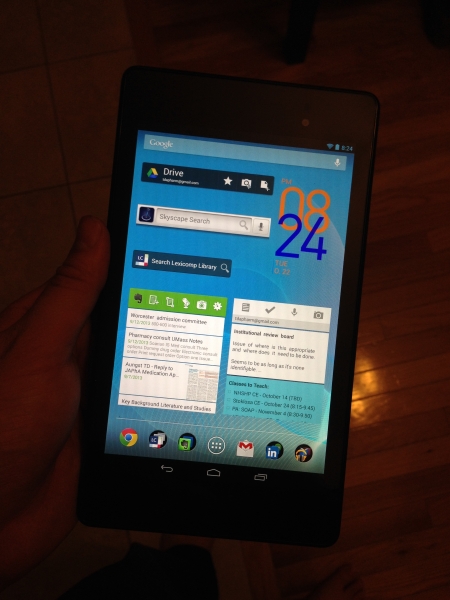 Just as Dr. Husain noted last year, the market for Android medical apps really has not improved (as discussed here in a previous post). While the Android OS has greatly improved over the last year–especially on smartphones–it seems to lag behind on tablets. It was difficult moving over a majority of the apps I use from my iPad to the Nexus 7.

In addition, many of the apps I wanted to use are not developed adequately to support the Nexus 7 as well. Several apps I downloaded did not display correctly on the Nexus 7 and I found difficulty in their use, much to my disappointment. The benefits of iOS is the ability to run apps even designed for the iPhone on the iPad without much of an issue in terms of display. However, Android fragmentation seems to be an issue with some apps really just looking blown up with highly decreased resolutions. 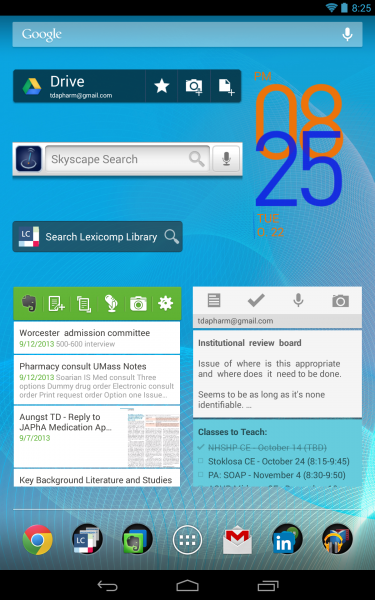 Interestingly, Jellybean 4.3 is quite fun, and I really enjoy the user interface on the Nexus 7. I will say this, if the iOS ever incorporated the easily modifiable interface that Android uses, I would think the best of two worlds have collided. The incorporation of widgets is perhaps the best feature, and I noticed that since I last used my Nexus, many of the apps have expanded upon their widgets and they flow easier than I remember.

As seen in several screenshots, I heavily rely on widgets to navigate my apps. In comparison to my iPad and iPhone, the Nexus 7 has proved to be a really great personal assistant, as I have found it easier to navigate my cloud based storage areas, and have been using Evernote and Google Keep more extensive than ever. It has greatly improved my productivity and access to key documents, especially as I bounce from classroom to meetings to hospital. 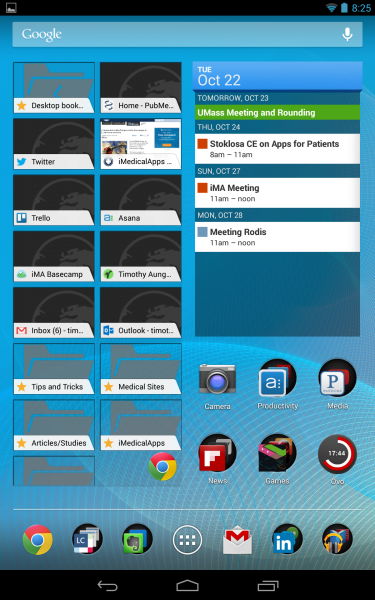 Google has managed to make a very cost-effective device capitalizing on its JellyBean OS and a great form factor. While I have several misgivings about the device as a whole, including its design and hardware, the biggest concern is the lack of medical apps I have grown accustomed to on the iOS platform. This may just be a tablet issue due to fragmentation as a whole.

However, the saving grace is definitely the ease of use of the device overall and comes back to the user interface which has made this device my go-to tool throughout the day to consult my calendar, email, and access files. While serving as a basic medical reference tool, it has greatly bridged the activities I do on my computer and on a tablet, especially with cloud based apps such as Evernote (which I find myself using more often) and Google Note and Google Docs. For that reason, I will continue to use the Nexus 7 for daily activities, and bring out the iPad for daily clinical work.

Upcoming developments could change this, with Google releasing their new OS… KitKat (Does anyone else get in a snacking mood when talking about Android OS?), which may make things better overall. However, the new iPad Mini looks to be a better development over the first generation with a better processor and retina display, and it will be interesting to compare the new device with the second generation Nexus 7. The price tag behind the new iPad Mini, though, is a bit standoffish and the recent release of iOS 7 has not revolutionized the way I work like the Android OS has. As such, I will wait to see what future developments occur before I get an iPad Mini–that or my Nexus frying on me again.