The future of wearable sensors in healthcare

iMedicalApps had the opportunity to attend the 2013 USC Body Computing Conference a few days ago. This week, we’ll share some of the highlights.

Three panel sessions at the Body Computing Conference were focused on Wearable Sensors and brought together thought leaders in the exploding mHealth segment.

Leading figures at Misfit Wearables, Basis Science, Samsung Health, Vancive, Jawbone/BodyMedia, Zephyr, Proteus, and various venture capital firms were all present to highlight their specific offerings and to comment on the rapidly-evolving space of wearable computing.

The panels were free-spirited and even lighthearted at times, but also provided unique insight from within the industry. Here’s a brief summary of some takeaways from the various panels. You can continue the dialogue in the comments section below.

The Distinction Between Consumer-Oriented and Medical-Grade Sensors

Involving and Motivating the 90% 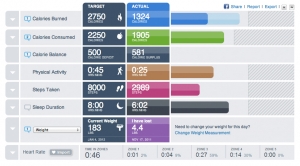 Going Beyond the Numbers

What Role Should Physicians Play?

Is The Wearable Fitness Market Evidence-Based? Should It Be?

As most of our readers are from the health field, we’d love to hear your input by continuing the dialog in the comments below on wearable sensors and medicine.

This article is part of iMedicalApps’ coverage of the 7th annual Body Computing Conference, hosted by the USC Body Computing Center, which took place on October 4th, 2013. The event showcases the cutting edge of digital health, in partnership with industry leaders and venture capitalists in biotechnology, telecommunications, entertainment, and design.