In perhaps the most “outside-the-box” demonstration at the Body Computing Conference, Tastemade co-founder Joe Perez introduced a collaboration between his cooking-based YouTube network and USC’s Center for Body Computing.

This was done in order to produce cooking-based videos for people aiming to eat healthily or with food restrictions, such as diabetes.

The Tastemade network was founded in order to take advantage of the emerging social and mobile platforms (Vine, YouTube, Instagram, etc) in order to dramatically redefine cooking content. Joe Perez explained that the launch of the cable television industry created the opportunity to establish category-defining brands such as ESPN for sports and The Food Network for food. With the growing popularity of YouTube and mobile viewing, Tastemade hopes to establish itself as the new go-to place for food and lifestyle. 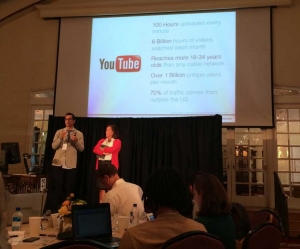 With that goal in mind, Tastemade launched in Santa Monica, building a 7,000 square foot production studio to help produce cooking-related content. More recently, they have expanded beyond the standard YouTube video format into the mobile space with the creation of an app that allows users to fully create and edit content entirely within their phone, sharing cooking endeavors captured entirely on the go. As such, Tastemade is investing heavily in the social networking generation and their willingness to seek and share content about living, food, and travel.

Joe Perez shared with us that his partnership with the USC Center for Body Computing was an evolution of healthy living content that is already available. Tastemade already features channels and content providers that target particular diets, such as the vegan diet. In their efforts to cater to diabetics, they considered several formats and content creators. One particular approach was a pair of college students with a “life hack” feel to it, figuring out ways to get through days with healthy snacks and foods readily available at supermarkets or local fast food restaurants.

Tastemade ended up deciding to go with partner Dani Spies and her channel Clean and Delicious. This was done presumably as their target demographic is more focused on working-age adults. In just four days, the video has already received over 4,300 views. While this video is only a concept at this time rather than an official series, it effectively showcases what future videos could look like. I agree with Dani Spies when she told me that “creating short accessible how-to cooking videos (like this), tailored for diabetics, could be an awesome way to help them manage their disease and better their lives.”

As an endocrinology fellow myself, I found this endeavor particularly fascinating as I interact with diabetes on a daily basis. Lifestyle/eating is the single largest challenge in diabetes management, and one where formal nutritionists and medical professionals have the least control over. By creating organic and viral content such as this cooking video for patients with diabetes, Tastemade and the USC Center for Body Computing can, in the end, perhaps provide the much needed lifestyle change that patients need to take control of their diabetes.

This article is part of iMedicalApps’ coverage of the 7th annual Body Computing Conference, hosted by the USC Body Computing Center, which took place on October 4th, 2013.  The event showcases the cutting edge of digital health, in partnership with industry leaders and venture capitalists in biotechnology, telecommunications, entertainment, and design.