Study looks into standard disinfection of iPads in clinical setting

With the use of highly mobile tools like tablet PCs in clinical settings, an effective disinfection method is a necessity.

Since manufacturers do not allow cleaning methods that make use of anything but a dry fleece, other approaches have to be established to ensure patient safety and to minimize risks posed by microbiological contamination.

Normal use of tablet PCs leads to a remarkable amount of microbial surface contamination.

Standardized surface disinfection with isopropanol wipes as guided by the application significantly reduces this microbial load.

When performed regularly, the disinfection process helps with maintaining a low germ count during use. This should reduce the risk of subsequent nosocomial pathogen transmission. Unfortunately, applying a disinfection procedure such as the one we propose may lead to losing the manufacturer’s warranty for the devices; this remains an unsolved issue.

This study highlights the positive reduction in microbacterial load that can be achieved on a  mobile device if a standard disinfection process is carried out. The development and introduction of a mobile app to assist in the disinfection process is a useful step forward for reducing nosocomial infections in hospitals. The fact that this has now been proved in this study suggests that hospitals should look to implement effective antimicrobial strategies for mobile users.

The ability of isopropanol wipes to decontaminate iPads was evaluated prospectively in a observer blinded, comparative analysis of devices used in a clinical and a nonclinical setting.

10 new iPads were randomly deployed to members of the nursing staff of 10 clinical wards, to be used in a clinical setting over a period of 4 weeks. A pre-installed interactive disinfection application (deBac-app, PLRI MedAppLab, Germany) was used on a daily basis. Thereafter, the number and species of remaining microorganisms on the surface of the devices (13 locations; front and back) was evaluated using contact agar plates.

Following this, the 10 iPads were disinfected and randomly deployed to medical informatics professionals who also used the devices for 4 weeks but were forbidden to use disinfecting agents. The quality of a single, standardized disinfection process was then determined by a final surface disinfection process of all devices in the infection control laboratory. The evaluation was performed observer blinded with respect to the clinical setting they were deployed in and personnel that used the devices.

We discovered a 2.7-fold (Mann-Whitney U test, z=-3.402, P=.000670) lower bacterial load on the devices used in the clinical environment that underwent a standardized daily disinfection routine with isopropanol wipes following the instructions provided by “deBac-app”. 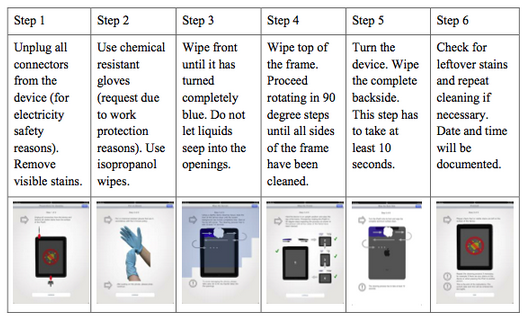