Google Trends is a useful tool to monitor trends in keyword searches over time. In a previous post, I examined the growth of medical and healthcare apps keyword searches. The Apple iPhone started as the first dominant smartphone, but Android operating system smartphones are now growing in number and claiming an increasingly large share of the market.

In this post, I will look at medical search trends for specific devices including the iPhone and Android smartphones. The results may surprise you.

Google Trends is a free analytical tool that can be found under the more and then, even more tabs within the Google search page. In Google Trends, the relative number of Google searches by keyword are plotted on a graph. Actual numbers of searches are not given, but the highest number of searches in the data set is set to be 100. The remaining data points are normalized and statistically adjusted and plotted. 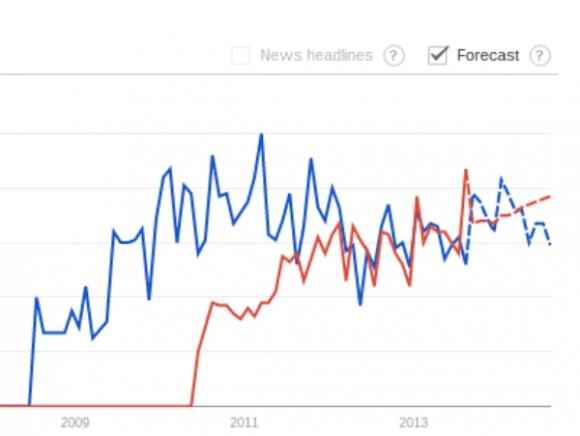 In the third screen shot, Windows medical search finally appears on the radar in 2013, over four years after iPhone medical. The number of searches is relatively small in comparison to both iPhone and Android medical searches.

Interestingly, the regional distribution of trends by devices shows a predominance of iPhone medical search interest in the United States, Australia, Canada and the United Kingdom. In contrast, the highest regional trend for Android medical search comes from Pakistan, the Philippines and India.

This Google Trends analysis shows the relatively recent emergence of Android medical as an equal if not leading medical device in Google search. The take home message for app developers is to not ignore the Android operating system when planning and producing medical apps. Search interest in iPhone and iPad medical still remains high. Google Trends is a promising tool for continued monitoring of trends and geographic regional patterns in medical app device interest.

William R. Yates, M.D. provides review and commentary on neuroscience research at his blog Brain Posts. He can be followed on Twitter @WRY999