One of the main difficulties facing clinicians in their day to day practice is communicating with patients with speech and language difficulties.

There has been a recent rise in the number of apps available that offer alternative and augmentative methods of communication. One such example is shown below. This post will serve to raise awareness of these types of apps by looking at some of their features and how they can be used in practice.

Augmentative and alternative communication (AAC) is an umbrella term that encompasses the communication methods used to supplement or replace speech or writing for those with impairments in the production or comprehension of spoken or written language.

Message generation is generally much slower than spoken communication, and as a result, rate enhancement techniques may be used to reduce the number of selections required.

These techniques include prediction, in which the user is offered guesses of the word/phrase being composed, and encoding, in which longer messages are retrieved using a previously stored code.

Who are these types of apps for? 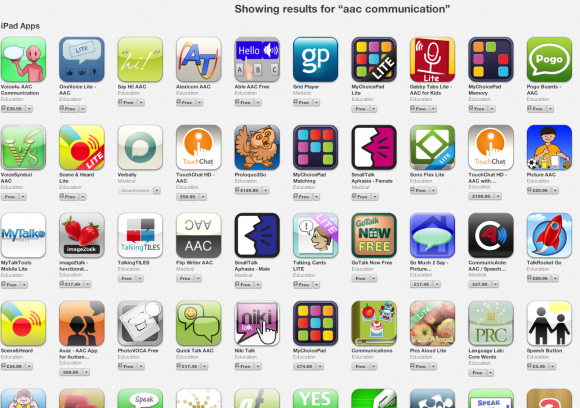 At this point, it is important to note that iMedicalApps has not formally assessed any of the aforementioned apps in order to evaluate their clinical utility. However, it is clear from looking at the app descriptions, screenshots and comments that these apps have huge potential in the field of speech and language therapy.

Given that doctors are likely to come into contact with patients suffering from varying degrees of speech impairment, there is huge value in having at least one of these apps available. There seems to be a wide variation in cost which may reflect the fact that this is a new market with little previous economic track record. Previous AAC solutions have relied on custom solutions rather than taking advantage of consumer electronic devices like the iPad and iPhone.

So far, I have not been able to find any specific medical AAC devices (unlike the medical translation apps we have previously seen) and imagine that this would be a potentially lucrative area for an app developer.

It is worth noting that all clinicians should have at least one alternative communication app available on their tablet. This means that there is always an additional tool to use in the case of difficulty communicating with patients.