“I’ve had that very same idea!” was my first response when Dr. Joshua Landy contacted me about Figure 1, a new, free medical image sharing app that his company, Movable Science, had recently released on the App Store.

I’m sure I won’t be the last physician to feel that way upon hearing of Figure 1.

Sometimes the best ideas are the most obvious, and Figure 1 brings such an idea to life.

Put concisely, Figure 1 is akin to an Instagram for medical photos. The iPhone app features a database of user-submitted images of medical pathology. It has an extra focus on patient privacy via automatic face-blocking and the in-app generation of privacy release forms.

In practice, how does Figure 1 fare?

Figure 1: A Free, Crowd-Sourced Medical Image Database for Your iPhone 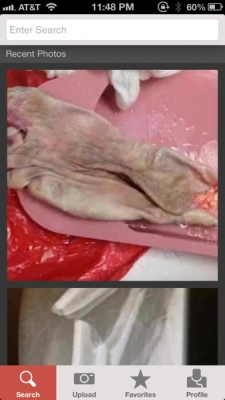 While practicing as an intensivist in Toronto, Dr. Landy wondered how he could quickly access a medical image database to assist in identifying new clinical pathologies. This question eventually led him to create Figure 1. Like many physicians, he was not satisfied with the paywalls of private medical image libraries or with Google Images’ lack of medical selectivity.

Furthermore, when it came to sharing medical images with his peers, he found e-mail inefficient, as images would often get drowned out amidst ballooning inboxes. As a result, he helped create Figure 1, a free, crowdsourced medical image sharing resource that is quickly and easily accessible for health care practitioners. Figure 1 aspires to harness the power of its users to create a vast and powerful resource for education and sharing.

Dr. Landy explained to me, “If you take a [medical] case that is one in a million… If there are 10 thousand people uploading photos, it becomes one in a hundred.”  The app allows users to upload, view, comment, and favorite medical images straight from their iPhone. For each photo that they share, the user can opt to share only to specific colleagues (via e-mail address), or to the general community at large.

In order to help preserve the integrity of image submissions and user discussions, Figure 1 allows for doctors to register as “verified physicians,” which allows their name to be displayed in a different color. The verification process consists of responding to an e-mail linked to an institutional e-mail address or via Doximity. 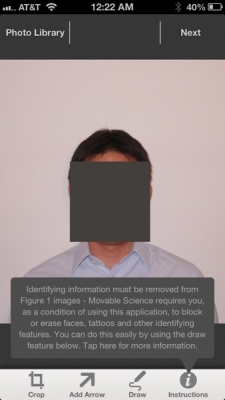 Movable Science goes to great lengths to address the privacy concerns that are sure to arise when it comes to doctors submitting photos of their patients. Most impressive is a face detection algorithm that automatically blocks out the face in any photo that is submitted. The app also encourages the use of its included editing tools to further remove any tattoos or other identifying features from each photo. 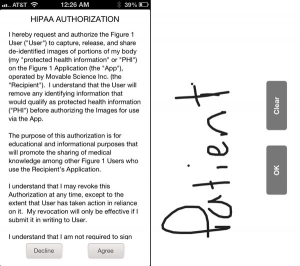 Going one step further, the developers also include within the app a digital consent form. After typing in the patient’s name, a HIPAA authorization form is displayed on the screen. Once the user clicks the Agree button, the patient is then asked to sign digitally on the screen with their finger. After this is complete, the completed consent form is then included in an e-mail which can be sent to necessary parties. Lastly, the Figure 1 app allows any photo to be flagged for privacy concerns in order to help police the site. 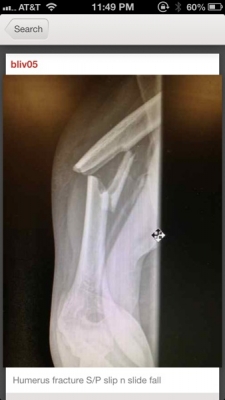 With any idea or concept, the execution makes all the difference, and the team at Movable Science has built an excellent foundation for Figure 1. The feature set is impressive enough for physicians to benefit immediately, while also remaining focused on simplicity.

In addition to the privacy features described above, the app also includes a photo editor that allows users to crop images and–more importantly–to add arrows that draw attention to specific locations in the image. Each photo has a caption underneath which can help give context to the image, provide a diagnosis, or pose a question for the other users.

The user interface is clean and smooth. Despite the fact that the app deals with a large number of photos, the app seamlessly loads new photos without becoming choppy . Furthermore, the search function quickly offers auto-complete suggestions using a medical terminology database, reducing the effort required to spell complicated medical words. In my week of regular usage, I did not encounter any crashes or major bugs of any sort. 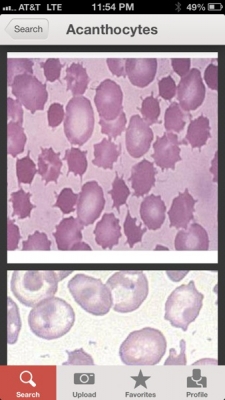 My week of testing Figure 1 just so happened to overlap with my dermatology preparation for the upcoming Internal Medicine Board exam, and offered plenty of opportunities to search Figure 1’s database. When searching for a topic or finding that is adequately represented in their database, Figure 1 absolutely shines. For example, when I came across the term erythema multiforme or Gottron’s papules in my studying and wanted a quick refresher, everything went perfectly as planned. A quick search and I was presented with high quality images, detailed captions, and physician dialogue.

Furthermore, as described in the section above, the app is of high quality, with careful attention paid to its custom interface and fluid user experience. Submitting a photo is no more difficult than doing so in Instagram, and the privacy features (automatic face detection and blocking) and editing features (adding arrow markers, cropping) all work without a hitch. The excellent app design is likely due to the fact that one of Movable Science’s co-founders, Richard Penner, is a skilled and experienced iOS developer who formerly worked on the Kobo eBook app.

Rather than just being a static database, Figure 1 also allows for user interaction within the comments section. The main screen of the app is a “live stream” of images that are being actively uploaded, and I often found myself browsing the photos to simply learn and see what other users were asking and discussing. One such example consisted of a submitter asking other users what the diagnosis might be.

I also was surprised by the breadth of the image database, both in content type and specialty. For example, I came across radiology images, cath images, gross pathology images, hematology images, digital photographs, and ECG’s. While you might expect certain fields (e.g. dermatology or rheumatology) to be more accurately represented, a cursory glance of images being uploaded seemed to cover a healthy variety of specialties.

Both in speaking with Dr. Landy over the phone and in using Figure 1, it quickly becomes apparent that a lot of thought and expertise are hard at work at Movable Science. The team is working on many additional features, including improved categorization of images and the development of an Android version.