Purpose of the Review

Approximately 70% of cancer deaths occur in low- and middle-income countries.

30% of cancers could be prevented.

It’s numbers like these that make any tool capable of providing information that could cause early detection worthy of taking a look at. Today we will review Cancer Signs and Symptoms, an app developed by the Cancer Research UK.

Upon launching the app we noticed how the user interface is not able to cope with large screen devices, instead it has a fixed size. The main screen contains a human body model which we can rotate to highlight areas where cancer signs and symptoms are frequent.

We see three tabs at the bottom of the app: Body View, General Symptoms and Donate. 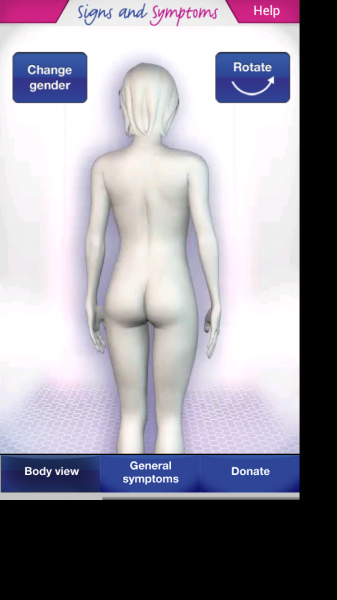 The Body View tab acts as the home screen also and showcases the human body model. We can switch the gender of the model so that more gender specific symptoms appear. Upon tapping on one of the highlighted areas, a friendly listing appears. 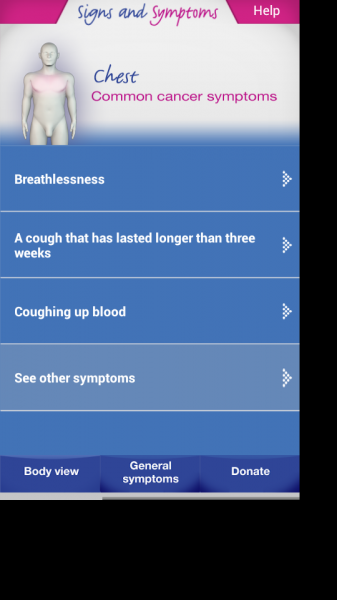 Each entry consists of  a few lines of text that provide clear and concise information about the symptom. A video also accompanies the entries. Unfortunately, it is not housed inside the app, rather it acts as a launcher for the Youtube app which then displays the video. 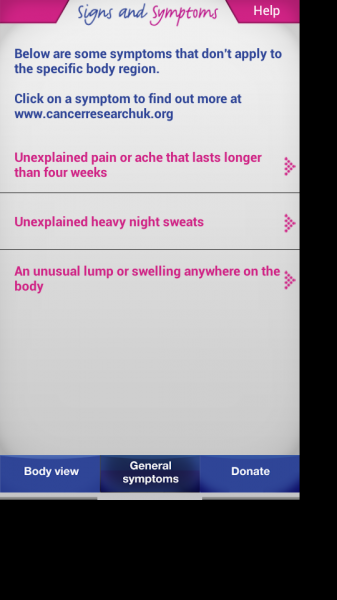 The General Symptoms tab gives information on other symptomatology cancer patients can have. The symptoms described here are often too broad and general and this can cause patients to feel unnecessarily preoccupied. Lastly, the Donate area offers the user quick links that facilitate donations to the Cancer Research UK.