The growth of affordable mobile devices cannot be underplayed in the past few years.

Coinciding with the number of smartphones and tablet computers available, the number of mobile apps have also significantly increased.

Here at iMedicalApps, our focus is on reviewing and commenting on the mobile medical app environment and its impact on the practice of medicine.

Focusing on the number of mobile apps available, it can be seen that Apple and Google are still leading with around 800,000 apps per each store. Windows has just announced that their app store passed 100,000 apps as well. This has been due in part to their tactic of paying developers to roll out numerous successful apps available on other mobile operating systems. Blackberry seems to also be facing this issue, with a large portion of their apps imported from the Google Play Store. 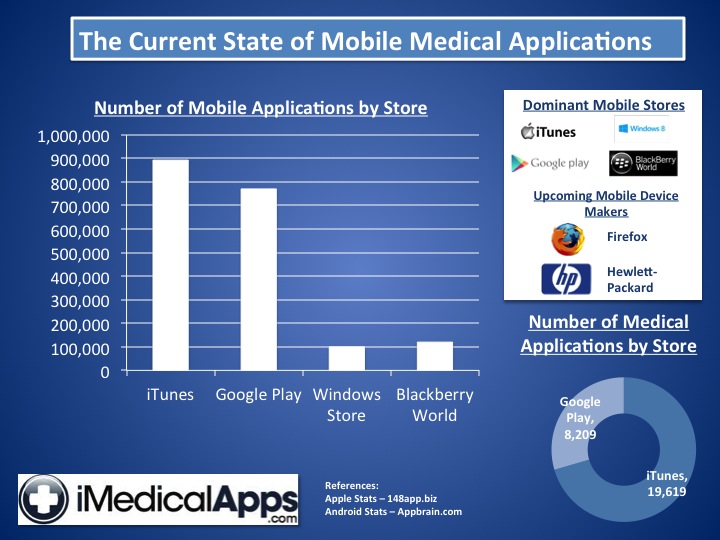 Breaking the number of apps down, people may be quick to assume that due to Apple iOS and Google Android having similar number of apps, that they may equally have the same number of medical apps.

Surprisingly, iOS actually has a substantial higher number of apps than Google.* Unfortunately, it is not easy to quantify the number of medical apps available on other mobile operating systems. This is due to Windows and Blackberry not listing a separate “Medical” section in their apps stores, and only a “Health and Fitness” category. At this current time, the Google Play store lists approximately 8,000 medical apps, while the iTunes store has almost 20,000 medical apps. This is quite the substantial difference.

One reason for this difference may be the fact that many developers recognize the majority of health professionals use iOS devices, and wish to target that market. It will be interesting to see in the next few years whether the playing field of medical apps will even out, or if one company will supersede all others, primarily by taking an active role in medical app development.

*NOTE: This article used data collected from 148apps.biz and Appbrain.com to collect the data presented. It is not currently possible to get an accurate count of apps on the Google Play or iTunes Store since they have discontinued the listing of apps available. As such, outside sources were utilized as mentioned.