The American Psychiatric Association (APA) recently published their newest edition of the Diagnostic and Statistical Manual of Mental Disorders (DSM-5) just this past month, updating the terminology and diagnostic criteria used by mental health practitioners.

Also, beginning June 1st, they will publish their first DSM-5 app based on the Desk Reference to the Diagnostic Criteria from DSM-5, a much more concise text that prominently features the diagnostic criteria.

New changes to the DSM-5, according to the APA’s press release, include changes in criteria for schizophrenia spectrum & psychotic disorders, depressive disorders, dissociative disorders, and more. New features include nuances among suicidal behaviors and nonsuicidal self injury, diagnoses such as mild neurocognitive disorder (NCD), alternative models for evaluating personality disorders, and the merging of autism and Asperger’s disorder into a single continuum of autism spectrum disorders. (See a highlights of changes from DSM-IV-TR to DSM-5.)

iMedicalApps previewed the app at the American Psychiatric Association conference. 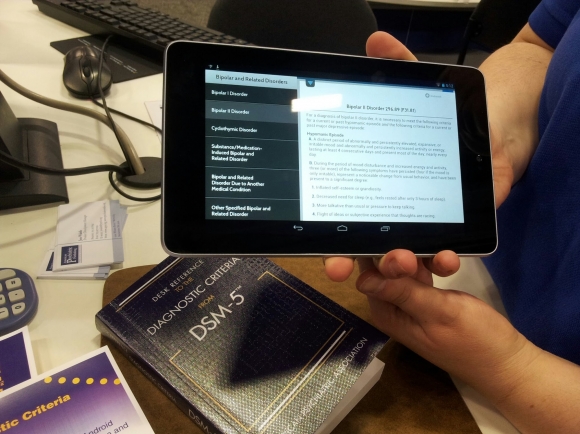 The app itself is cross-platform, with an interface very reminiscent of the Enyo framework on the Palm WebOS. This app features each chapter and section conveniently listed in a left-hand sidebar. The entire text has search functionality as well. Sections can be bookmarked, but bookmarks aren’t shareable and cannot be synchronized.

Android users can pinch-and-zoom the text. However, this wasn’t available for iOS. The app itself worked very smoothly on both the iPad and the Google Nexus 7, with both landscape and portrait modes. 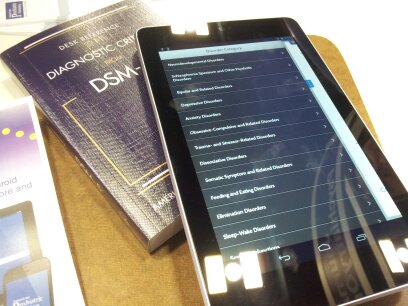 Some other drawbacks of the app include the lack of ability to copy and paste text, or share sections of the text. I didn’t see a setting for changing the typeface either, nor did I find any functionality to highlight or take notes on the text itself. The price for the app will be approximately the same as the paper version: $69.00. It will be available from both the Google Play Store and the Apple App Store on June 1, 2013.