I’ve been paying attention to smartphone and tablet hearing apps for a few years.

I don’t need a hearing aide yet, but I am likely to need one in the next five years. So when I heard about the beta version of BioAid, it peaked my interest.

BioAid is an iOS hearing assistance app for individuals with hearing impairment.

The developer clearly lets you know that this app is currently a research tool – not a medical device – and it comes with no warranty or guarantee.

The developers are seeking user testing and input on this beta version.

I downloaded the app to my third generation iPad and have been testing it in several scenarios. 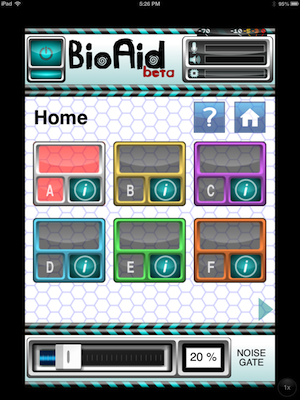 Hearing impairment comes in many forms reflecting varying reduction of hearing across the frequency spectrum detectable by the human ear. The BioAid app aims to customize sound reproduction and amplification for the individual user.

Each of the six categories has four sub-category icons labeled one to four. This gives the user 24 levels to test for best individual results. Additionally, users can slide the noise gate button in each level to adjust for specific hearing situations.

I’ve had several audiograms demonstrating a mild high-frequency impairment. As expected, I found the best personal BioAid app results in the flat and high-frequency boost category. I tested the device listening to music from speakers, listening to television and at a church service with variable types of sound including music and conversation.

I was impressed by the results of the device. The app produces good amplification and the handy volume indicators compare the volume of sound received with the volume being produced. The app can run in the background while using your device with other applications. I think if my hearing impairment was more severe, I would be even more impressed.

The categories and controls take some time to learn and may be a barrier for some individuals. The flat boost works like a sound amplifier and comes with the same quirks, i.e. loud rustling when the device is moved, amplification of background sounds as well as the sound you want to focus upon. I found myself doing quite a bit of control manipulation in the church service as target sounds varied a great deal in spectrum and volume.

The developers address two key limitations of their app on the app website. First, no Android version is available and won’t be until an issue with Android sound input/out latency is addressed. Second, Bluetooth cannot be supported with the app due to sound delay produced by the Bluetooth processor.

I think this device could be improved by adding the ability to save individual preset settings for easy access. For example, after an initial customization at the bingo parlor, an individual could save a bingo parlor preset button for selection the next time they go.

Despite these limitations, I like this app and think it might best be currently thought of as a device to address specific limited hearing problem areas like:

I do think the BioAid app is an advancement and does point to what I conceive as the bionic ear of the future. This app has two of my bionic ear components: the processor in the smartphone and customizability to individual hearing deficit patterns. My bionic ear adds automated hearing assessment, automated customized dynamic hearing boost and a discrete high-fidelity earphone that goes weeks on a single charge. If this app seems of interest to you, download and experiment. Then provide high-quality feedback to the developers. I need your help in accelerating the pace of developing the bionic ear. So do many others.

Bill Yates, MD is trained in family practice and psychiatry. Be sure to check out his personal blog Brainposts and follow him on Twitter @WRY999.