From oxygen filled micro-bubbles to a virtual pet for isolated patients, a roundup of #TEDMED’s final days

With an increasing proportion of our population on multiple chronic medications, it’s important to ask whether we are actually accomplishing the desired effect; this was a question posed by Steve Gullans to TEDMED’s audience in its final day as he suggested that we might be both underdosing and overdosing patients.

Along these lines was Isaac Kohane‘s talk on i2b2 (Informatics for Integrating Biology and the Bedside), the National Center for Biomedical Computing. The work being done there serves to develop a scalable informatics framework to  enable clinical researchers to use existing clinical data for research and, when combined with IRB-approved genomic data, facilitate the design of targeted therapies for individual patients with diseases having genetic origins. This technology is free and open source and could potentially allow us to have personalized treatments and make patient data count and work for that patient in addition to helping others.

As we work towards applying our existing tools more effectively, another speaker reminded us that there are still novel, out-of-the-box tools out there remaining to be discovered.

John Kheir‘s humbling talk focused on a story about how he used extracorporeal membrane oxygenation on a small child. He using all the advantages of the best high-tech medicine available and still failed, this is something that definitively resonates with a physician’s way of thinking. There’s hardly any healthcare professional who hasn’t wished there were more techniques he could try or more drugs to fight off that infection. Moments like that are sort of built-in in our profession. However technologies may already exist that could potentially save lives but haven’t been implemented yet. Such was the case for Kheir’s story as he wondered if intravenous oxygen was possible; he found out that it was not only possible but the technique to produce it was already available using gas filled microparticles.

A completely different type of “novel” technology was described by Victor Wang, a former robotics scientist with NASA, to take care of elderly patients. The fact is that many senior citizens are no longer active in their community and this affects their health as it increases their feeling of loneliness and depression. If only they would have someone to keep them company…

That’s where Victor’s idea comes in. He founded GeriJoy, a company that uses cutting-edge  technology to find solutions so elderly patients don’t feel that lonely anymore. One of such inventions is a talking dog app. The app allows users to scratch the dog, hear their responses of how much they love spending time with them and it can even be used as a medication reminder. As further described in his bio,

GeriJoy supports seniors’ well-being through patent-pending virtual companions that can provide benefits similar to live pet therapy. These virtual pets serve as real-time avatars for a worldwide network of humans, who provide intelligent, compassionate conversation about topics like family photos and news. Essentially, it’s the modern realization of the fabled talking dog, Internet-connected and even able to provide peace of mind for caregivers by updating them on how the senior is doing. 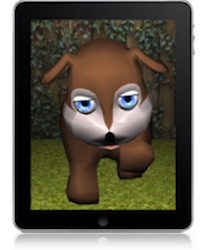 Among the stands there was also a company called Wellframe. They provide an interesting service that strives to prevent the unnecessary re-admissions due to lack of following up on patients or complex post-discharge care. The app they have developed connects the patient to a centralized network where personalized information and tasks are pushed to help patients stay on top of their own health. They are reportedly about to start randomized testing to find out the success rate of such an approach, but it does look promising. 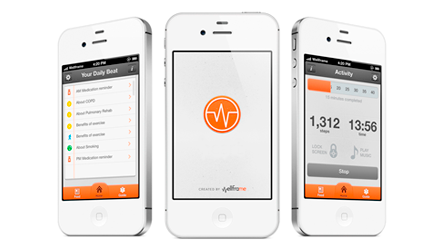 We also found a Johnson & Johnson stand where a patient education app was being presented. The idea behind the app is to have the user answer a small set of questions such as their weight, height, whether they are smokers or not and that provides them with a “health score” that’s useful for determining what lifestyle changes they should perform. The app is called Digital Health Score Card and will be available on iOS, Android and Windows phones. Though its probably very simplified, perhaps a little simplicity – a simple number that patients can follow – would go a long way. 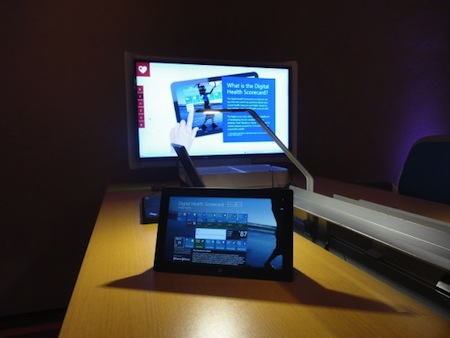 Another interesting find was Brain Sentry‘s helmet with a mounted sensor that alerts when athletes suffer major impacts. This could be useful preventing players to continue playing while having undiagnosed concussions. Of note though is the fact that we could not identify any validating studies showing that the device provides effective screening for concussions after an impact.

These are just a few of the interesting speakers and demonstrations we saw at TEDMED. All in all, we were reminded of the many opportunities we have to improve the quality of care we deliver – both by creating better tools and by figuring out how to apply them more effectively.