From devices for early initiation of hypothermia and mobile EEG to a mayor’s war on obesity, #TEDMED

Wrapping up the first full day of TEDMED yesterday, we had the opportunity to hear from a lot of interesting speakers and presenters. The aim of interdisciplinary events such as this one is to provide healthcare professionals creative ways of solving problems. One speaker in particular reminded us that no intervention or idea exists in a vacuum; to tackle any health problem, we need to come at it from many different angles.

Mick Cornett, mayor of Oklahoma, found his city on the America’s fattest cities list and thought maybe it was time for a change. In order to solve a public health issue he approached the matter from different angles: he first launched a website where citizens would pledge to lose pounds with the goal that the whole of Oklahoma lost one million pounds. The website is quite attractive and provides users with food and health information, helping them make important decisions about food and stick to their diet.

The next step was to redesign the way people used the city; according to Cornett, how sidewalks are designed can actually affect how many pedestrians you have. If you make it nicer to stroll around, more people will. Finally Mayor Cornett began taking on the food industry but instead of forcing them he decided to work with them through events like the Mayor Special that involve chefs competing for the best healthy dish. It remains to be seen how successful he will be, but the multi-faceted approach definitely caught our eye.

Going back to the patient-physician relationship, Sally Okun, Vice President for Advocacy, Policy and Patient Safety at PatientsLikeMe in Cambridge, MA talked to us about communication. She talked about how often healthcare professionals tend to isolate patients by using alienating language. By using technical language we end up  segregating the people who we really need to communicate with: patients.

On that note we present you with an odd and clever way to raise patient awareness. ZDoggMD sang a song about testicular cancer prevention called “Manhood in the mirror”, a parody of Michael Jackson’s song “Man in the mirror”. The song is now being used in waiting rooms and patients are responding very well to it. Just an example of what we can accomplish with a handy cam and a little creativity. Link here.

The stands that are available here continue to amaze us. Cryotherapy is now being used as a way of reducing tissue damage after cardiac arrest, but EMTs are seldom able to start this course of treatment once they arrive at the scene. We found Novocor, a company who is working on the solution for that. They propose a portable cooling system that, without auxiliary power, would lower the temperature of saline solution in an efficient manner. More information on their project can be found here. 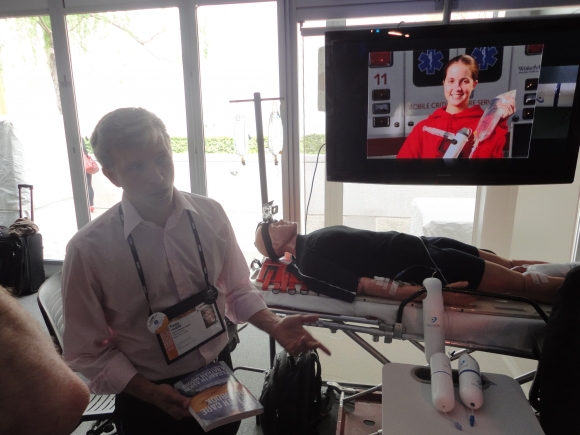 Also if you’ve been following us at Twitter you might have noticed that we commented on the activities organized by Emotiv. This company produces portable EEG devices and is using them here at TEDMED to track engagement, anxiety and amusement.

You can expect further comments on the use of this technology during the event as our correspondent has really enjoyed playing around with it. 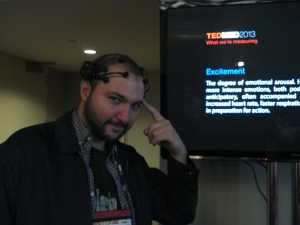