There is something magical about a baby’s heartbeat; I never get tired of listening to it.

I love watching my patients’ faces light up in excitement or ease in relief at the sound of the fetal heart beat. On a labor and delivery floor we, as practitioners, watch them incessantly.

Can an app allow you to listen or watch a baby’s heart rate in the comfort of your home? The Baby Heart Rate Monitor and Pregnancy Calculators app, at first look of the title, seems to indicate that this is possible.

So is this a patient-centered app? No. Proving that the devil is in the details with this app’s description, the app does not claim and does not provide this ability.

Having not done due diligence in reading through the details of this app, I was puzzled by the home page in the 2013.2 version, which is simply a list of calculators. 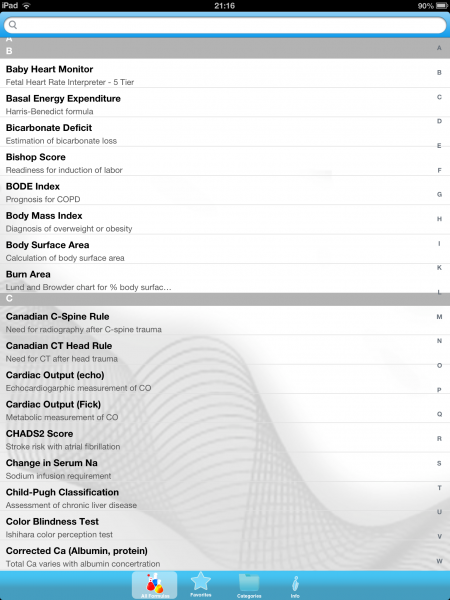 I did a mental check…wait, why am I reviewing this app? I thought I was going to bug my pregnant colleagues to let me listen to their baby, but where? and how? After 30 seconds of mental gymnastics and flipping through the list, honing in on the letter “B,” I finally found the baby heart rate monitor.

I then click on it, but instead of finding an app to listen to the heart rate, I find a step-by-step guide to the 5-tier system of interpreting the fetal heart rate. Interesting, but maybe not as useful as I hoped. See below for a brief line on the 5-tier system. 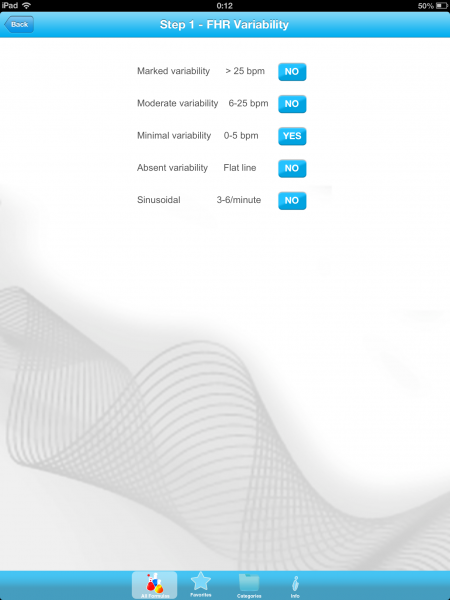 Having chosen to use this app feature, you are lead one step at a time through evaluation of the fetal heart strip. 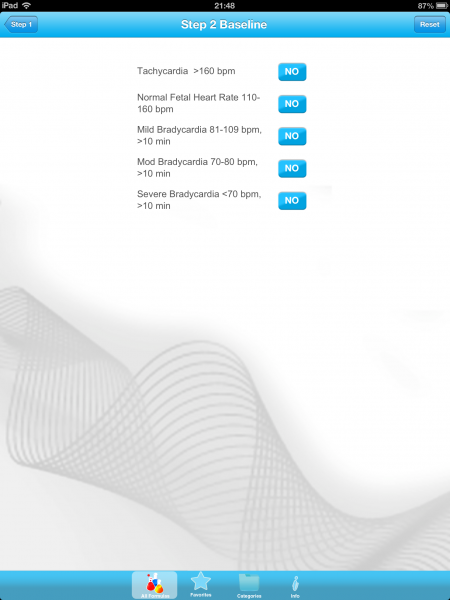 In order to select the one (and only one) option for each step, you press the “No” radio button. It changes so quickly to “Yes” and then auto-scrolls, that I almost missed the change in the button.

After navigating through each of the steps, the final screen appears. This screen gives you a color-code for how worried a person should be about the fetal heart tracing and whether it is associated with fetal acidemia. For all, a summary of the steps for the one through three selections is given, the presence or absence of acidemia is listed, and the risk of deterioration is shown.

At the bottom, the 3-tier classification category is listed (although not labeled as such). For blue through red tiers (tiers are assigned one of five colors), management suggestions are listed. 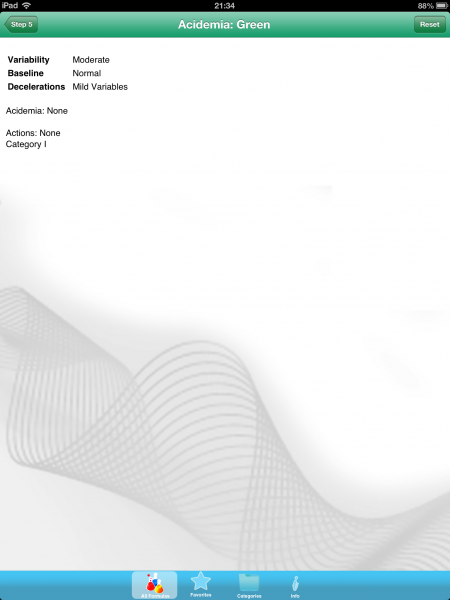 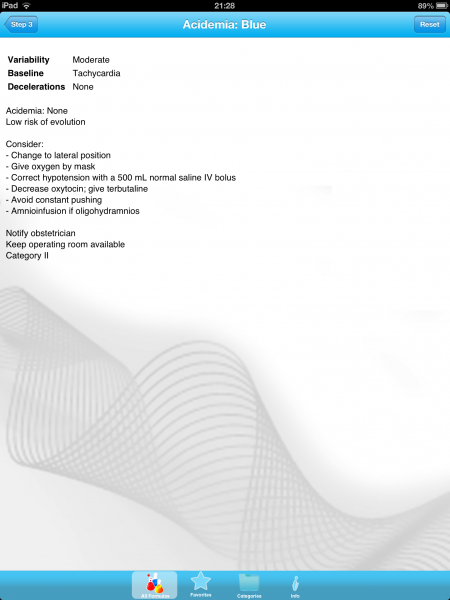 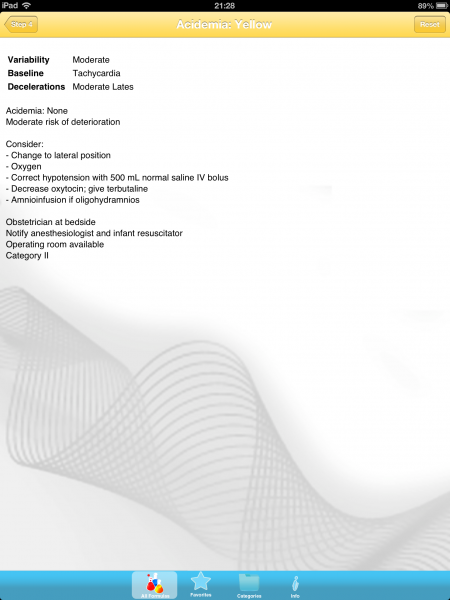 You can navigate back and forth between the steps in sequential order and see how you selected and change your choice as needed.

The remainder of the app provides many helpful calculators and risk scoring systems, including a Bishop’s score calculator and a Pregnancy Wheel (a basic, simple wheel). 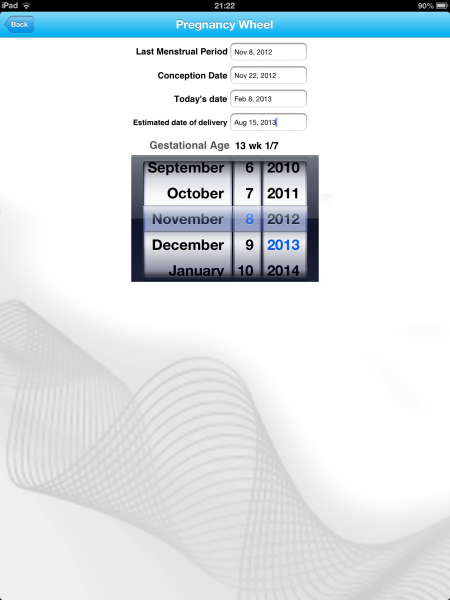 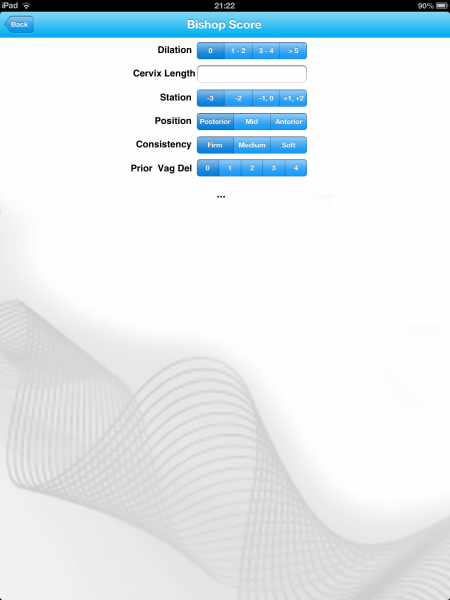 Evidence to support use

Patients that may benefit from app

Versions 2013.4 and 2013.5 completely change the features of the app.  The app still offers the five-tier system and due-date calculator, but also the ability to listen to the fetal heart rate (I was unable to replicate this). Additional features offer the ability to guess at baby’s gender (the evidence behind this idea is limited), the ability to interpret the fetal heart rate and compare it to known recordings. The app also contains a link to get an iPhone doppler and to give the app as a gift.

Rating: 2.5
1. User Interface – 2.5.  Initially difficult to find featured baby heart monitor, clicking no when you mean yes is counter-intuitive
2. Multimedia usage – 2.  Does not include pictures or utilize splitscreen for named feature, does use color
3. Price ($0.99) – 3.5. Good calculator resource, less helpful for named feature of app.  Newest version (2013.4) adds 3 dollars to the cost.
4. Real world applicability – 2.  More likely to use the calculator features compared to baby heart monitor system for now

Disclaimer:
This post does not establish, nor is it intended to establish, a patient physician relationship with anyone. It does not substitute for professional advice, and does not substitute for an in-person evaluation with your healthcare provider. It does not provide the definitive statement on the subject addressed. Before using these apps please consult with your own physician or healthcare provider as to the apps validity and accuracy as this post is not intended to affirm the validity or accuracy of the apps in question. The app(s) mentioned in this post should not be used without discussing the app first with your healthcare provider.