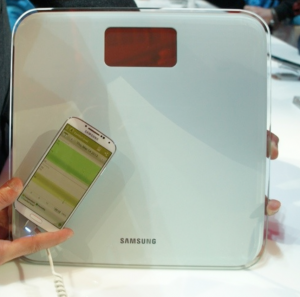 The Galaxy S3 is the most popular Android smartphone on the planet. Their followup to the S3, appropriately dubbed the S4, was announced yesterday. Although the form factor has largely stayed the same, there are significant upgrades to the phone’s overall specs.

In addition to the announcement of the phone — Samsung also announced three key health device accessories that will launch with their feature phone.

We won’t get into the nitty gritty of the S4’s processor and some of their gimmicky software features  — but it’s important to note Samsung’s S4 will have a built in pedometer for tracking the number of steps you take.  This is notable as Samsung’s S4 will be the most popular feature phone with a native health tracking feature.

Sensors in the phone also enable it to measure ambient temperatures and humidity in the room you’re in.  This data feeds into Samsung’s S Health app.  I must admit, I have a difficult time appreciating what your surrounding temperature and humidity have to do with health fitness.

Samsung’s S Health app is a native app the phone comes with — enabling you to input the calories you consume in a day and a slew of other fitness metrics.

Why does this all matter?

All of these peripherals have a “been there, done that” feel. But Samsung’s foray into the accessory market is tremendous.  It shows the age of mobile health devices has arrived. Furthermore, Samsung has a knack of taking something that’s been done — and optimizing and mass producing it with wide consumer adoption.

They are applying this same model to mHealth.

When a company that had over $180 billion in net revenue (more than Apple) for 2012 decides to seriously get into mobile health devices, it’s safe to say the age of mobile tracking has definitely arrived.

For a Physician’s guide on the best self tracking devices, check out a compilation review done by one of our writers.