Stylus Software: … But The Software Is a Crippling Deal-breaker

Unfortunately, despite the stylus’s impressive accuracy and performance, the current software is crippling and simply unusable for clinical medical use. For handwritten notes, the only viable Android app compatible with the S Pen is Samsung’s own S Note app.

When creating a note, you must select one of nine simplistic templates, none of which are natively suitable for physician use. Each template can have the background customized, but only with image files (not .doc or .pdf). Frustratingly, the dimensions of the page cannot be calibrated, and new templates can not be created, so simplifying the creation of progress notes is near impossible.

As pictured above, I was unable to fully recreate the typical table that I use to keep track of my inpatients on the hospital wards (the table was much too small, and positioned poorly). Furthermore, as a result of the awkward sizing and spacing of the table, even the finest pen tip was still too bulky for the small spaces. I can’t imagine how much more difficult it would be to try to recreate a more complicated progress note.

The software does have some well-executed features, though. The S Note software can toggle a mode where the app will draw shapes and tables based on the strokes that you create. For example, sketching a circle will be assisted to create a perfect circle, and the same goes with lines, squares, and tables. The S Note software also has a slew of features allowing for different pen brush types, colors, and thickness. Additionally, it features syncing integration with Google Docs and Evernote, which provides for the archiving and accessing of stored notes across multiple devices.

For medical students and more academic physicians, the simplified S Note App might be enough for straightforward note-taking. The S Pen stylus also shines when it comes to editing and viewing PDF’s, which plays a healthy role in facilitating life-long learning and evidence-based medicine.

Unfortunately, for viable clinical utility for a physician as anything more than a scratch pad, fully-functional software is required to properly implement the S Pen, and such software simply does not exist. Many older, bulky Windows-based tablets wielding similar stylus technology have been integrated effectively into clinical practices, but only with the assistance of expensive EMR software for Microsoft Windows.

The OS: Ice Cream Sandwich Brings the Overall Tablet Experience On Par with the iPad

The Note 10.1 came installed with Android 4.0, better known as Ice Cream Sandwich, wrapped inside a Samsung skin. The Jellybean update (Android 4.1) is supposed to be rolling out any day now in the USA, but as of publication of this article, it still had not arrived.

Android for tablets has come a long way since Honeycomb, and provides a full-featured experience that is comparable to iOS on the iPad. Ice Cream Sandwich provides a comfortable blend of power/configurability without sacrificing usability and ease of use, although I still prefer the simplicity of the iPad experience myself. 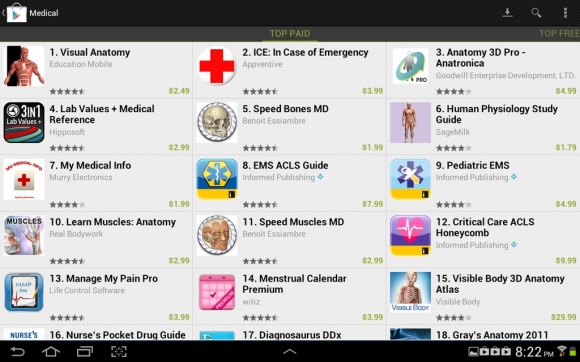 The App Store: Medical Apps for Tablets are Still Lacking

The Android App Market for tablets has been discussed previously in our review of the Nexus 7. Thanks to the growing popularity of the Nexus and Kindle tablets, the app ecosystem for Android tablets is maturing at a blistering pace, but it’s still at least a year behind Apple’s iOS.

For example, I first received the Note 10.1 two months after its release, and I found that video playback on Hulu Plus was not supported for my device. An eventual update fixed this playback issue, but the experience was still jarring, given Hulu’s dominance in streaming television shows.

With a significant caveat, the Google Play App Store provides nearly every “must-have” app, including Medscape, Epocrates, Dropbox, Evernote, Facebook, Instagram, Hulu Plus, Netflix, Amazon Kindle Reader, and Yelp. However, the asterisk is that many of these apps are simply zoomed-in versions of their mobile phone equivalents, making for wasted screen real estate and over-simplified layouts.

While this occasionally occurs on the iPad, most of the essential iPad apps now feature UI’s designed specifically for the larger screen. Android apps are often simply stretched version of their phone apps, whereas most iPad apps have UI’s designed for tablets.

The other downside is that smaller startup apps or niche apps usually first appear on the iOS market.  Unfortunately for health care providers, this includes many mobile health applications. Thankfully, the biggest players (Epocrates, Medscape) are present on the Google Play Android App Market, but many of the smaller apps reviewed here at iMedicalApps.com are often not initially available for Android.  For example, a native UpToDate.com app for Android was only released in December 2012, although it has been around for the iPhone since July.

On the upside, Google apps for Android are usually superior to their iOS counterparts and include more advanced features. For example, Apple’s decision to replace the Google Maps app with their own Apple Maps has proven to be a well-publicized blunder, and the Note 10.1 happily features the full Google Maps’ experience, including 3d vector-drawing and turn-by-turn navigation. (Note: Google Maps finally came to iOS on 12/12/2012).

Similarly, until October 2012, Google Drive (formerly Google Docs) only included the ability to edit documents and spreadsheets on the Android versions of their apps, restricting the iOS versions to read-only access. 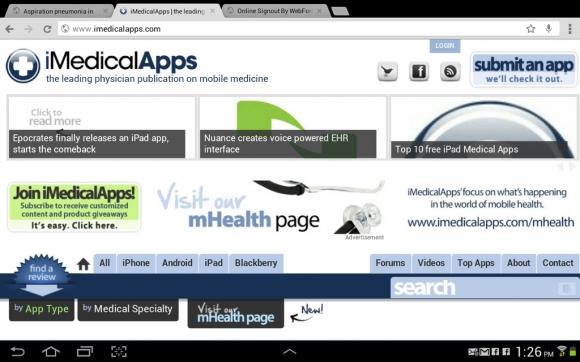 Screenshot of Chrome, taken on Note 10.1

Conclusion: The Next Big Thing Is Close, But Not Here Just Yet

The Galaxy Note 10.1’s S Pen stylus holds so much potential by providing stylus functionality that closely resembles a pen-on-paper experience. The S Pen’s precision and ease of use (enabled by the Wacom digitizer in the Galaxy Note’s screen) dramatically exceeds those found in many of the iPad’s blunt-tipped styluses.

However, the apps that take advantage of the S Pen’s advantages are few, and the existing apps are frustratingly limited. For doctors hoping to incorporate the S Pen into their EMR or to use it for progress notes, the software simply does not exist. For medical students or academic-minded physicians, there is only limited utility for simple note taking or PDF annotation.

When it comes to apps, the Android App Market for tablets still trails noticeable behind the iPad App Store. While most apps for the iPad feature tablet-specific UI’s that fully utilize the larger real estate, many Android apps for tablets (even big players such as Epocrates and Medscape) are simply zoomed-in versions of their smartphone equivalents.

Since apps are essentially the lifeblood of a tablet, this disadvantage is significant enough to recommend the iPad or iPad Mini over any Android tablet for most users, but the playing field is quickly leveling out.

Thankfully, both of these concerns (limited numbers of S Pen Stylus-compatible and tablet-optimized apps) should become less of an issue as more Galaxy Note and Android tablets are sold.

The 5.5 inch Galaxy Note II has already sold 3 million units, and Samsung is rumored to be releasing an even larger 6.3 inch Galaxy Note III in 2013. For physicians, better third party app support for the stylus can’t come soon enough, because the S Pen is truly something special and deserves so much better than the current S Note software.