Starting with the tagline “The Next Big Thing Is Already Here,” Samsung has been clearly setting its sights on Apple’s iPad and iPhone.

On the heels of the successful Galaxy smartphones, Samsung released the Galaxy Note 10.1, an Android-based 10-inch tablet that introduced a true fine-tipped stylus, promising a more precise and natural pen-like interaction with documents.

Contrary to the clumsy, blunt-tipped capacitive styluses for the iPad, the Note 10.1 (and it’s 5.5” tablet/phone sibling, the Galaxy Note II) utilizes stylus technology from industry-leader Wacom that provides pressure-sensitivity and precision.

The saying goes that the pen is a physician’s most important medical instrument, so does that mean the Galaxy Note 10.1’s advanced stylus allows it to edge out the iPad?

Can doctors finally enjoy a true pen-like experience with tablets? 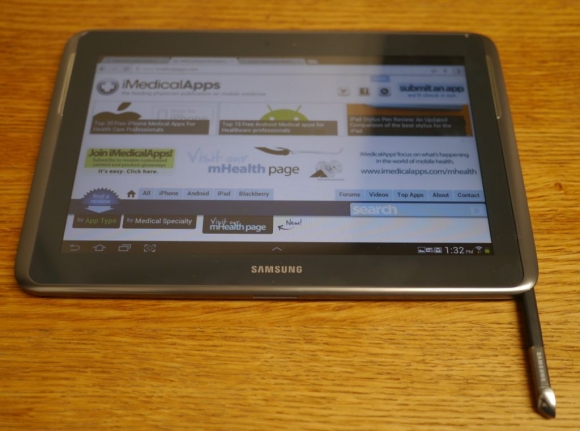 The Galaxy Note 10.1 features a professional and clean two-tone color motif with silver and black. It features two speakers in stereo (the iPad only has mono), and houses the stylus in one of its corners. A 1.9MP front-facing camera rests above the screen, and a 5MP rear camera sits in the top middle of the tablet.

Unfortunately, the tablet housing is made almost entirely of plastic. While the plastic does not feel flimsy or overly cheap, it definitely lacks the sturdiness and solid feel of the iPad. Along its top, the Note features a power button, volume buttons, a microSD card slot, an iR blaster, and headphone jack. Unluckily, it utilizes a proprietary Samsung cable for charging and syncing, so be careful to not lose the cable.

The Note’s 10.1 inch screen features a resolution of 1280 x 800, which comes out to 150ppi (pixels per inch). For reference, the iPad’s Retina Display features 264ppi, and the iPad Mini features 163ppi. While the lack of retina display was discernible with noticeable pixilation when compared side-by-side with a retina display, the Note 10.1’s screen was still fairly sharp, with excellent viewing angles and sufficient brightness for hospital use.

Form Factor: 10-Inch Tablets Are Too Big for Most Medical Use

As we’ve written in two separate articles thus far, the general consensus here at iMedicalApps.com is that 10 inch tablets are simply too bulky for regular use by most physicians. The Note 10.1 is no exception. In thickness and weight, the Note 10.1 just barely edges out the Retina iPad: the Note is 0.35 inches thick as compared to the 0.37 inch iPad, and weighs 1.31 lbs compared to the iPad’s 1.44 lbs.

The Note does have a slightly larger surface area, as it houses a 10.1 inch screen rather than a 9.8 inch like the iPad, although the screens seem virtually the same size side-by-side. When held landscape, the screen on the Galaxy Note is slightly wider and shorter, adopting a 16 x 10 ratio rather than the 4 x 3 ratio of the iPad.

While the 16 x 10 ratio might be preferred for watching video, I prefer the iPad’s 4 x 3 ratio’s versatility in both portrait and landscape orientations. When held in portrait, the Galaxy Note 10.1 felt a little too tall and narrow. 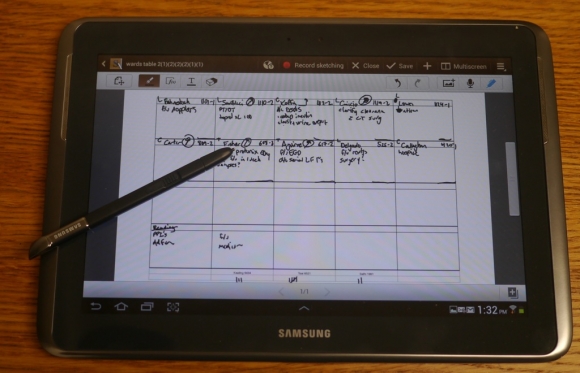 In reality, the Galaxy Note 10.1’s usefulness as a tablet for physicians really hinges on the experience created by its fine-tipped stylus (branded the S Pen) and Wacom digitizer. Technologically, the S Pen functions almost exactly as advertised: The fine tip was precise, and I even felt confident writing small text, which is simply not possible with blunt-tipped capacitive styluses. The feel of the stylus on the screen was smooth and natural.

Furthermore, every stroke was rendered quickly. A bonus perk is that the Note 10.1’s stylus can be replaced with any Wacom-compatible stylus, just in case you lose the original S Pen. Wacom recently announced the bamboo line of styluses, built specifically for the Galaxy Note line.

Another feature I appreciated greatly (enabled in most apps) was the option to disregard pen strokes not made by the S Pen, preventing stray pen marks from being made by my wrist. Despite this feature, I did find myself occasionally pressing buttons on the screen with my wrist, which was aggravating at times.

With respect to the stylus itself, it is roughly the thickness of a standard BIC pen, and about two-thirds as tall. Hidden where you grip the S Pen is a small button than enables certain actions when associated with gestures.

Unfortunately, the button is so subtly designed (no differentiation in color or texture), I often found myself accidentally pressing down the button and rendering the S Pen ineffective as a writing device.  It also would be nice for the option to use the button as a toggle for erasing or changing color, as that might be more useful for certain users. 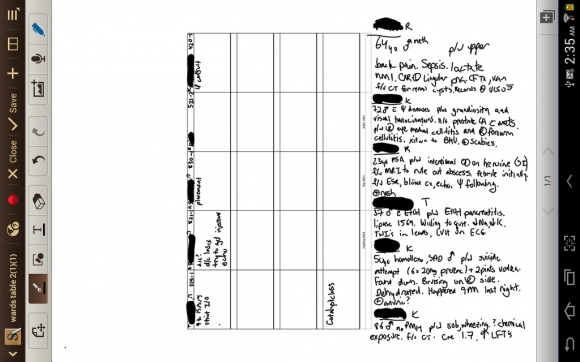