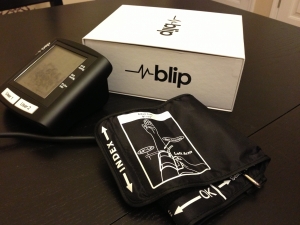 So back to the yet to be released Blip device. No iPhone-esque aesthetics, no big splash at a conference, and no direct connectivity to smart phones.
Not too exciting right?

After spending a few days with Blip and exposing it to my father, I found its austere facade was hiding the secret to the brilliance of this portable blood pressure monitor — Simplicity.

My father has been in the market for a Blood Pressure monitor for the past year, and he hasn’t found one to his liking yet. He is a brilliant scientist, but mobile technology leaves him puzzled. At the same time, he is a religious self tracker. He takes meticulous notes of his cholesterol and blood pressure readings from clinic visits and has them all plugged into Excel documents.

When I tried to get him to use the iHealth and Withings blood pressure monitors it was a disaster. The biggest issue he had was plugging the monitors into his iPhone and having to use the apps. He didn’t like having to navigate into the app to look at his blood pressure readings and using the app to get the devices to work.
When I introduced him to Blip — the same issues arose with setup. I had to guide him on how to do the Access Point Setup, and he couldn’t have setup the device without my help. 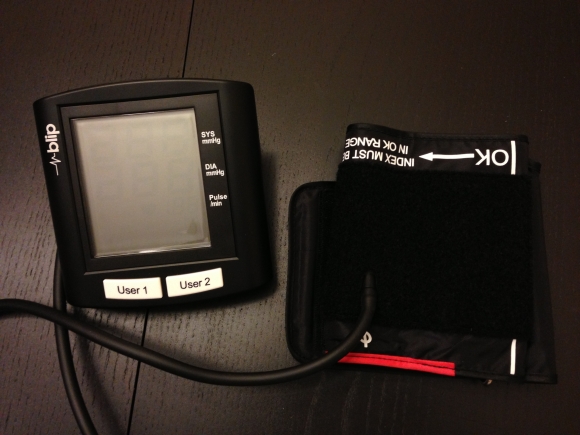 APS: The Access Point Setup is a one time exercise when you initially power on the device. You can use a smartphone, tablet, or computer to connect to the devices Wi-Fi name (Blip), and then enter http://192.168.101.1 into any browser — from there you direct the device to connect to your local hotspot. To be fair, this is a relatively easy setup, requiring only 5 minutes, but novice users might need help doing this.

The device had already been preregistered on the BlipCare portal site, but I’m relatively certain I would have had to do this setup for my father as well — you have to enter the devices serial code number and set up an account. 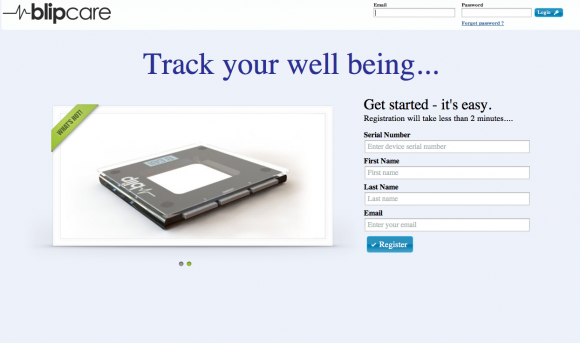 As you can see from the pictures, the device layout is straightforward. There is an area for User 1 and User 2. Once the setup is complete, all you have to do is put your blood pressure cuff on, hit the correct user, and then the device will take your blood pressure and automatically upload it to the online portal using your Wi-Fi.  Two people can use one device with the two user setup.

The above are graphs that are made when your blood pressure is recorded.

The Blood Pressure readings are a mixture of my own and some preloaded values from the makers of Blip — I didn’t want to publish my fathers information in this post. 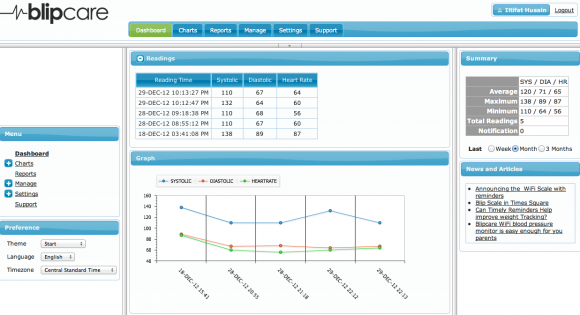 Blip takes four double A batteries to operate. When we inquired about the battery life, Blipcare told iMedicalApps that one cycle of batteries will provide 800 readings, so about one year.  They also told iMedicalApps that they have no plans to create a device with a dedicated power source — due to cost of the overall device and ease of use reasons. When your batteries do run out, Blip told us you do not need to reprogram the device, stating the device will remember up to 3 SSIDs (wi-fi spots).  This is important — if I were to set up this device for my father, I would have to set up the APS every time the battery ran out if the hotspots were not saved.

Blip also enables users to set up reminders using the portal. This section appears to be a work in progress as I had difficulty setting this up. You have to use a 24 hour clock, set a threshold, and do other things. Needless to say, they need to work on making this simpler. The idea is you can set a daily reminder for checking your blood pressure — and the device will alert you to this.

Their concept of using your WiFi connection to upload data makes so much more sense for middle-aged and elderly people — folks who aren’t necessarily about the next gadget or the most technically adept. It will surely require the least amount of maintenance.

There are parts of Blip that are still a work in progress. The portal they have still needs some work from a UI standpoint, and they need to improve on key software functionality, such as simplifying the reminder process. Further, they need to create a native app for iOS and Android devices that will display all the information in the portal.  Blip has told iMedicalApps they are in the process of launching an app for Android and iOS within this month.  Android can be expected this month, and iOS in subsequent months.

With all that said — I came away impressed with the Blip Blood pressure monitor.  More importantly, my dad has finally found a Blood Pressure device he wants to actually use.

Blipcare website  — their initial price point is $149. You can purchase it through Indigogo (think Kickstarter)