A physician’s one year review of GymPact, an app that pays you to go to the gym

Editors Note: Dr. David Ahn has an updated 2 year review of GymPact you can check out at this link.

With the New Year just behind us and excess holiday weight still lingering, many patients and health care providers alike resolve to get in shape and lose weight, hoping this year can be the one where lasting change begins.

Thankfully, that was actually last year for me, and I lost (and have kept off!) 25 pounds.

It almost sounds too good to be true, but it’s not.

After using GymPact for 1 year and 196 workouts later, I’ve earned $83.09, and I’d highly recommend it to anybody that is serious about getting in shape.

GymPact was released one year ago by a pair of Harvard students who were inspired by the simple behavioral economics principle that people are more motivated by NOT losing money than by simply earning money.

Therefore, GymPact asks users to make a two-fold commitment: for each week, they must in advance 1) set a target number of gym visits for the upcoming week and 2) agree to a fine ($5-$50; default is $5) for every number of visits they fall short of that goal. Then, at the end of the week, those that succeed in carrying out their pact are rewarded the money paid out by the users who did not meet their goals. (This amounts to approximately $0.50-$0.75 per workout). 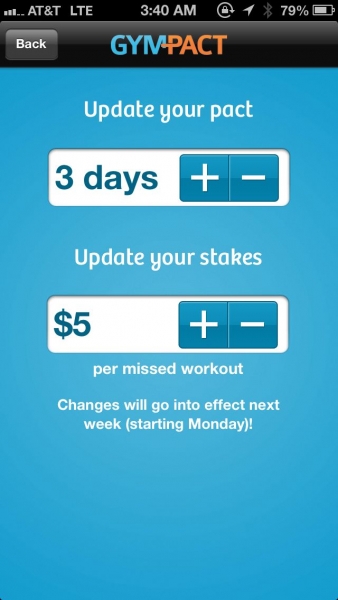 In order to verify that you are in fact going to the gym, visits are logged via GPS check-in on an iPhone app (an Android app released on 1/1/2013 ). There are a few simple rules to prevent users from taking advantage of the system:

The App: Simple, and Gets the Job Done 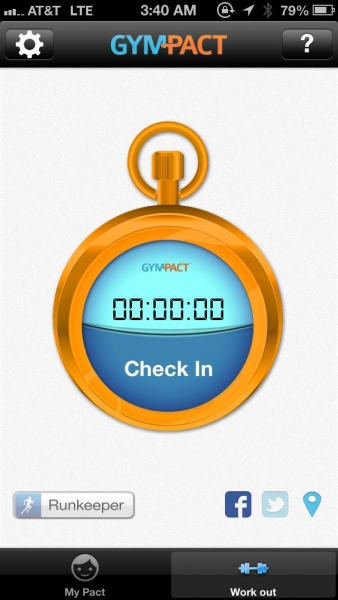 The app for iPhone functions exactly as promised. When arriving at the gym, you open up the app, tap “Check In” and then you’re workout has begun. From that point on, the GPS feature of your phone ensures that you stay at the gym for at least 30 minutes or the app will not formally count your session as a workout.

If the location of your gym is not recognized, you can submit it to be registered in the future. Several months ago, GymPact also released integration with RunKeeper that allows outdoor runs to count towards your workout pact as well, so long as they exceed 30 minutes and 0.5 miles. This can be activated by tapping the Runkeeper account on the main screen, and connecting the two services.

Upon completion of your workout, you simply tap the checkout button. In case you forget, the app will also check you out automatically once the GPS has detected that you are no longer at the gym. The only downside to this auto checkout is that the app must be reopened in order for the workout to be officially submitted and counted towards your pact.

Via the profile screen on the app, you can quickly see how many workouts you have submitted and how much money you have earned. On this screen you can also change your pact for the next week, withdraw your rewards  (via PayPal account), or schedule a vacation. 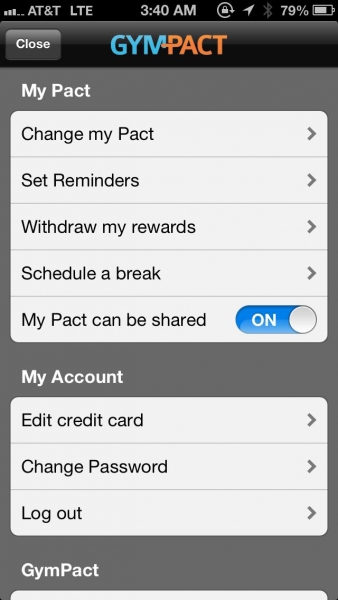 After 1 Year of Use: I’m a Believer

GymPact beautifully executes a very simple concept of using negative reinforcement (a monetary penalty) to promote positive behavior (going to the gym). Both its business model and utility for end-users are fairly transparent: motivate users to work out by fining them if they do not reach their goal.

Throughout the past year, many of my concerns and doubts have been relieved. Initially, I was suspicious that the service would flounder due to people cheating the system, leading to a lack of penalty payments being distributed to reward those who completed the pact.

However, the reality is that the actual reward (averaging out to about $0.50 per workout) is so small that it provides very little incentive to cheat, though, it is still enough to provide satisfaction for the honest users. If anything, it seems that the service is thriving as they are now expanding to the Android platform, and have been quick to fix bugs and add additional features (such as Runkeeper integration, and support for the taller iPhone 5 screen).

Furthermore, customer support has been excellent. In the occasional instance where there is a server error or a workout is not logged, I have used the app’s simple bug feedback tool to report a workout, and the staff has been quick to log an extra session.

One additional perk is the inclusion of occasional Kiip rewards, that will provide additional rewards for checking in. About once a month, when checking out from a workout, a Kiip coupon will pop up, allowing you to e-mail yourself a small reward.

The rewards ranged from less meaningful (a discount on glasses from an online website) to more meaningful (amazon mp3 credit, as pictured). While relatively insignificant, the occasional coupon was still a welcome surprise. 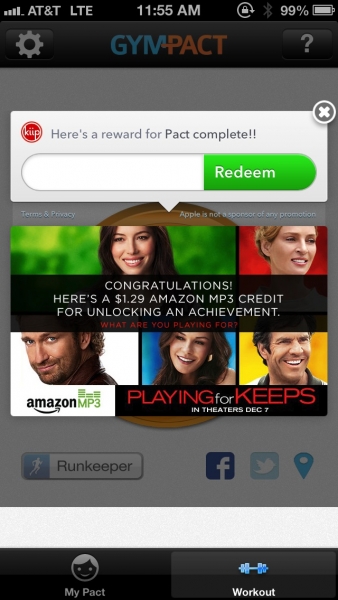 Most importantly, though, the app brings about real results. It doesn’t take a medical degree to realize that going to the gym is directly correlated with increased physical fitness. When I first started going to the gym regularly, GymPact was clear motivation for me to work out, especially earlier in the week, rather than pushing off workouts until later.

Not before long, logging my sessions and going to the gym became habit. The pacts also motivated me to continue going to the gym during residency months where I would otherwise have not, such as my night float rotations and ICU/Wards months.

Obesity and physical inactivity is an epidemic that directly affects medical outcomes. Patients and doctors alike are guilty of not taking serious initiatives in making lifestyle changes for the sake of their physical well-being. GymPact is a simple but powerful tool for the iPhone (coming to Android) that effectively helps users embrace going to the gym, and rewards them financially for doing so. More satisfying than the $80 or so that I’ve earned, however, is the improvement in my waist line and overall sense of healthiness.