[This is a preview of some of the exciting mHealth research being presented at the mHealth Summit on December 3-5, 2012. This abstract and others are candidates for the iMedicalApps-mHealth Summit Research Award]

Young men (18-24) who have sex with men (YMSM), especially men of color, are at high risk for contracting HIV.

One emotion in a sexual narrative that might precipitate more automatic risky choices for young MSM may be shame (e.g., in one’s sexual desires). HIV prevention interventions are not designed to reduce MSM’s shame.

SOLVE (Socially Optimized Learning in Virtual Environments) is an HIV prevention interactive video (IAV) intervention that relies on a neuroscience based theory, stressing both cognitive and affective factors in decision-making.  SOLVE (funded by an NIAID/NIH grant), involved a sex-positive game, where YMSM go on a virtual date in which men’s choices (e.g., about alcohol, drugs, type of sex, risky sex, etc.) affect how the scenario unfolds.

Three games were separately developed for Black, White, and Latino MSM to be culturally sensitive. When YMSM make a risky choice, their choices are recorded and guides “popup” to interrupt the choice and challenge the risky choice, acknowledging men’s emotions, desires, goals, and beliefs, and providing them with a strategy to achieve their goals but stay safe. We call this self-regulatory narrative circuit of interrupting, challenging, acknowledging, and providing strategies for achieving goals while reducing risks an ICAP process.  YMSM then make the same choice or a safer one with all choices recorded.  At the end of the date, guides recap YMSM’s choices and provide models of how and what they could have done differently to stay safe while still having fun.

Could interactive narrative interventions be delivered more broadly over the web? As YMSM use an increasing number of platforms (e.g., Mac/PC, consoles, mobiles, web), a challenge is to design an intervention with broad reach that could be used across a range of platforms.

An animated interactive narrative HIV prevention game that could be delivered nationally over the web, and was capable of cross-platform use, could afford a viable alternative with broad reach, especially if YMSM could experience psychologically realistic virtual sexual partners simulating more of the challenges YMSM routinely encounter that may increase their sexual risk-taking. The game allows users to learn to reduce risk without real world dire consequences. 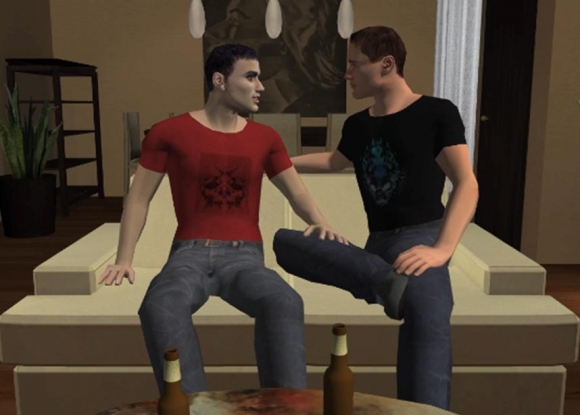 In SOLVE-IT, YMSM design their own 3-D animated characters, make choices for them on dates and sexual interactions, and are scaffolded by the user character’s virtual future self (participant’s older chosen self-character) to enhance self-regulation when risky using an ICAP process.

To ensure that users have potential romantic partners that are psychologically realistic (and afford more challenges), virtual agents are intelligent with an underlying set of goals and beliefs, and “theory of mind” about themselves and the user that autonomously guide the agents’ choices about how to respond to the user. Setting agents’ parameters (e.g., goals) differently, automatically changes the dynamics of the agent’s decision-making and the resultant agent behavior, creating for players a much richer set of decision-making challenges to increase YMSM’s practice in making safer choices in real life.

Animated intelligent agents and narrative situations in games have tremendous adaptability and can be more readily updated and changed than interactive video that relies on human actors. Nevertheless, it wasn’t clear that targeted high-risk YMSM would respond similarly to the SOLVE 3D animated intelligent agents/interactive storytelling HIV prevention game (e.g., changing desired cognitive and affective variables and reducing risk over time) as they had in SOLVE using interactive video with human actors.

To evaluate how YMSM responded to SOLVE-IT YMSM (18-24) who were at high risk for contracting HIV due to their behavior in the past 6 months were recruited nationally. YMSM participating in the study over the web were randomly assigned to the SOLVE-IT game or a wait-list control group.  At baseline and immediately following the intervention, we assessed YMSM’s cognitions (e.g., intentions, self-efficacy, consideration of future consequences) and their level of shame as in the IAV.

This pattern of findings is very consistent with our prior findings for YMSM (18-24) at immediate post exposure to SOLVE-IAV. That suggests that YMSM are responding similarly to SOLVE regardless of whether it involves interactive video with human actors or SOLVE using an interactive 3D animated game with intelligent agents.

These preliminary findings are exciting because they suggest that we can deliver animated interactive narrative interventions for at-risk YMSM over the web, using multi-platform technologies, which reach a large, diverse, national target audience.

Lynn Carol Miller, Ph.D. is a professor in the Annenberg School for Communication and Journalism and Department of Psychology at the University of Southern California.  Dr Miller is an interpersonal psychologist by training and an expert in the use of virtual interactive technologies (interactive video and 3D serious games for health).  As principal investigator she has received over $11 million in funding and has published one edited volume and over 70 peer reviewed articles and book chapters.

Paul Robert Appleby, Ph.D. is a research assistant professor of pediatrics at the Keck School of Medicine (CHLA) and a research scientist in the Annenberg School for Communication and Journalism at the University of Southern California.  A social psychologist by training, he is a specialist in and producer of interactive videos and 3D serious games for health.

Alexandra N. Anderson, MPH is a community outreach and education coordinator at Zero Breast Cancer, a non-profit organization. Her background includes several years as a research assistant on HIV prevention research.  She published a book chapter with our team in 2012.

Stephen J. Read, Ph.D. is a professor of social psychology at the University of Southern California.  As a social psychologist and cognitive scientist, he is an expert in computational modeling and social reasoning as well as interactive technologies such as interactive video and 3D games aimed at reducing risky sex among men who have sex with men.

John L. Christensen, Ph.D. is an assistant professor of communication at the University of Connecticut.  His research as a graduate student focused upon utilization of technology (e.g., interactive video and 3D serious games aimed at reducing risky sex among men who have sex with men and a telephone application designed to effect healthful diet change).  Currently he is co-investigator of a grant addressing racial health disparities.

Stacy Marsella, Ph.D. is a research associate professor in the department of computer science, an associate director at the Institute for Creative Technology (ICT), and a co-director of USC’s Computational Emotion Group at the University of Southern California.  Dr Marsella’s research in computational models of human cognition, emotion and social behavior were integrated into our 3D serious game for HIV prevention.