[This is a preview of some of the exciting mHealth research presented at the mHealth Summit on December 3-5, 2012. This abstract and others are candidates for the iMedicalApps-mHealth Summit Research Award. Check here next here to read who won the award]

Depressive disorder in adolescence is common, disabling, and heightens the risk of suicide. Preventing the onset of depression may prevent a lifetime of mental health issues and health service utilization.

There is growing evidence that prevention programs based on cognitive behavioral therapy (CBT) can be effective. These can be targeted at those at ‘high risk’ or made available for all (universal). Universal prevention programs do not run the risk of identifying or stigmatizing individuals, but tend to be resource intensive and difficult to scale up.

We set out to develop a universal depression prevention program for adolescents that is delivered solely via their mobile phones. The program is based on cognitive behavioral therapy and was developed by experts in adolescent psychiatry and psychology. Key CBT messages are delivered via video diary style messages from ‘ordinary’ teenagers talking about issues and events in their lives, and the strategies they used to change the way they think about those events in order to be more positive.

These key messages are repeated in other ways via video messages from celebrities, short cartoon episodes (“mobisodes”) about four teens and their dog, and short catchy text messages. We wrapped these up into a coherent program of two messages each day for nine weeks, with a logo, music, and three key words repeated in every message. A summary of the key messages was also available via a simple mobile website that included how to get help and prizes/downloads. 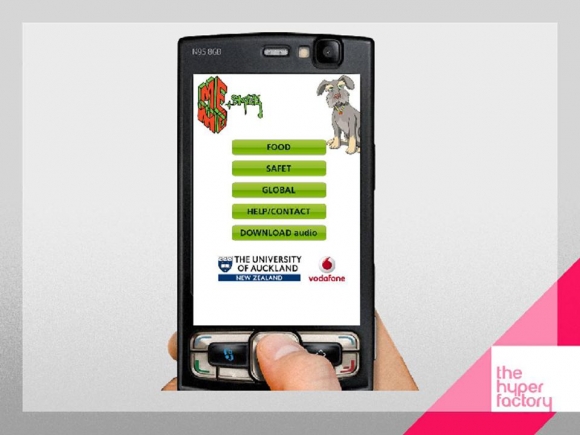 Our development period of nine months included focus groups, extensive pre-testing with young people and input from cultural and media advisors. We then conducted a prospective double-blind randomized controlled trial with adolescents aged 13 – 17 years from 15 high schools in Auckland, New Zealand. More than 1300 students registered their interest in receiving a mobile phone program about living positively. They were all given a run-in program for nine days designed to reduce later drop out and sharing of messages (contamination).

855 students were then randomized to receive either MEMO (CBT intervention) or a full attention control program with the same frequency and types of messages on different topics (healthy eating, sustainability, cyber-safety). Trained research assistants conducted individual interviews with all participants at baseline, post-program (9 weeks) and 12 months later. Students identified with high risk of depression or self-harm at baseline were excluded from the study.

We received very positive feedback from the students receiving the MEMO program. Overall they found it useful, particularly with respect to helping them to feel more positive, and 91% said they would recommend it to their friends. We looked at both researcher-rated and self-rated scales of depression symptoms and the onset of depression during the study period. The researcher-rated mean scores (Child Depression Rating Scale) initially improved post-program then worsened by 12 months in both the MEMO group and control group. There were no significant differences between groups.

Similar results were found when adjusted for multiple factors and in sensitivity analyses.  Similarly, the self-rated depression scores initially improved and then plateaued in both groups with no significant differences. There was also no difference between groups in the other measures such as general functioning, or in the diagnosis of depression during the study period.

There are several potential reasons for this lack of significant benefit of the CBT-based program compared with the control program. It is possible that our control program (about healthy eating etc.) was equally effective as the CBT program. It is perhaps more likely that both groups benefited from the three individual interviews with research assistants trained to listen to any problems they may have – this is certainly more than ‘usual care’. A further study related issue is our choice to exclude all those at risk so that our entire cohort ended up being a fairly ‘happy’ group according to the baseline scores. This may have made it harder to show any improvement.

With respect to our intervention, it is possible that the mobile messages were not able to provide a sufficient ‘dose’ of CBT. Particularly when we consider that participants did not watch all of the video messages – while 75% of them said they watched at least half of the video messages sent to them, we found this to be an overestimate compared with data provided by the gateway/mobile network. This may be an indication of a drop-off in engagement with the intervention over time that we must give serious consideration to in our future attempts to improve the program.

Despite this, the immediate feedback from participants did show that they understood the main CBT messages we were attempting to convey in the program. This gives us hope that this is a worthwhile endeavor  and we will continue to work on ways to improve and build on MEMO to help more young people to live in a positive space!