MD on Call has finally reached the Android platform!

Messil’s new Android app attempts to help the anxious and inexperienced interns and residents, such as I was just a year ago, by providing teaching points and tips on issues that are commonly encountered on the general inpatient floors–especially during the night shifts.

The iMedicalApps team reviewed the iPhone version back in 2009.

Now 3 years later, let’s take a look at how the Android version compares.

The most scared that I have ever felt in my life was during my transition to residency from  medical school.

Not only did I feel fear of the impending patient responsibility, but I was terrified of the idea of being on-call overnight (night float), when supervision and accessible help were most limited.

To make things worse, not only was I a brand new intern in a 618-bed level 1 trauma center at the time, night float was my very first rotation. By day 3 of residency, I was already alone with another intern partner covering the other half of the medicine patient list.

Although upper year residents were mostly available in-house, they had different duties, and were not consistently accessible. Initially, the stress was overwhelming and almost unbearable.

I was fairly confident that I understood and was able to apply the knowledge I acquired from medical school. I was also fairly confident that I could recall much of what I have studied from the textbooks. However, the fear and uncertainty lingered, and rightly so, because I was still not prepared to answer the questions that waited for me during the nights, especially for the first couple of weeks.

“We lost IV access and patient is due for critical antibiotics”

“Patient is agitated and violent towards the staff.”

“The central line is bleeding!”

“Patient needs something for sleep.”

Although these calls may sound all-too-familiar to most residents, fellows, and practicing physicians, these are some examples of calls that I was getting during night float. I was definitely not prepared at the time. I was terrified that I might do something wrong and perhaps jeopardize a patient’s care, or worse, kill a patient. Being a fresh intern, every one of these calls was a serious issue requiring my full attention.

Some would argue this fear is what drives residents to become better doctors, but, surely, any guidance or reassurance would have been amazingly helpful, especially when I was getting paged every 5 minutes while juggling nearly 100 patients on my list. 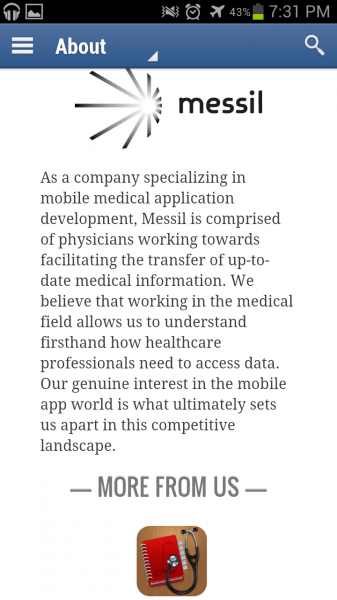 Messil’s new Android app MD on Call attempts to help these desperate interns and residents such as I was back then. The developers of this fantastic app is a two person team composed  of a radiation-oncology resident and an application programmer based in Canada. Having a medical resident be part of the development team perhaps explains the “medical dialect” in the writing style. Having the content written by someone with first-hand experience, not only gives the app a confidence boost, but also contributes to the overall familiarity and usefulness to medical professionals.

MD on Call is intended to be used for general inpatient ward setting. Although not comprehensive enough to include critical care issues, the content included in this app is enough for the general floors, in my opinion. Based on my own experiences, MD on Call is a very, very helpful app for those new to residency, especially for those who may find themselves to be alone on call.

The app is nicely organized and designed, which unfortunately is sometimes a neglected aspect of medical apps. Overall, the user interface and choice of fonts and icons give this app a signature presence and a subtle personality. The design elements are thoroughly incorporated throughout the app, allowing for a pleasant and smooth user experience. Never will users be presented with frustrating navigations, tremendously long lists to scroll through, or difficult information extraction.

There is a lot of material that is included in this app, which would take quite a long time to sort out and describe. Each section is unique and has its own presentations that work best for the topic at hand, but, again, maintains the design choices that unifie the user experience throughout the app. 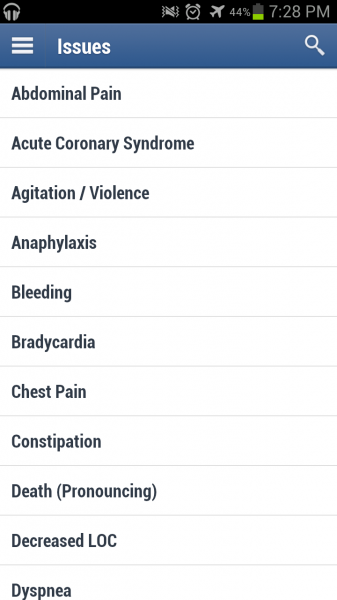 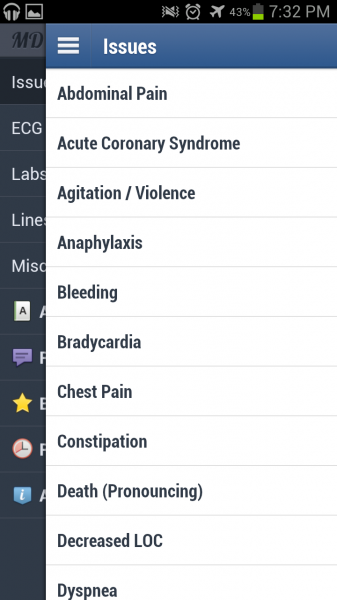 When first starting the app, users are presented with the “Issues” list. The navigation menu is hidden on the left side and can be called upon by tapping the “menu” icon located at upper left corner. The menu can also be pulled up at anytime within the app by pressing on Android’s (usually) capacitive menu button or by swiping, if I may, “Windows 8” style from the left side of the screen. 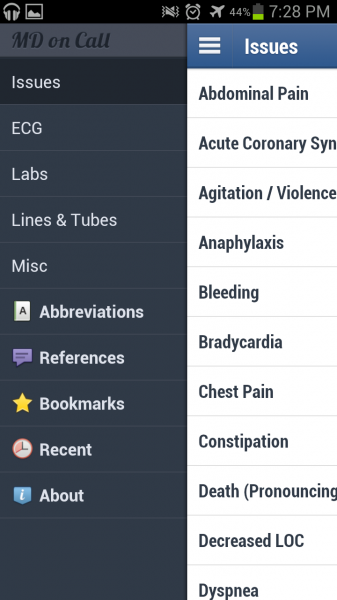 The menu is categorized appropriately into “Issues,” “ECG,” “Labs,” “Lines and Tubes,” and one last section, “Misc.” Several helpful tools are available for the novice as well, such as a medical abbreviation dictionary, reference sources, bookmarks, and a history of recently accessed articles.

Although these sections and tools perhaps do not seem extraordinary by themselves, the inclusion of all these aspects into one app does reflect on the thoughtfulness of the developer. 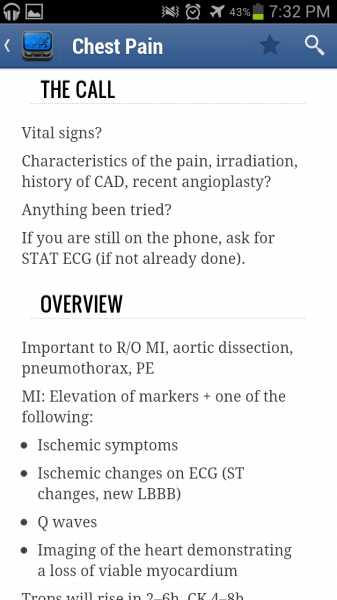 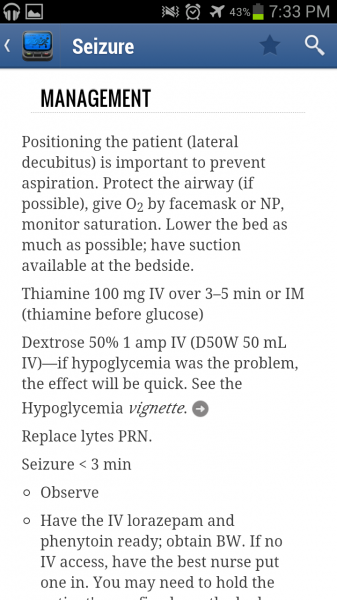 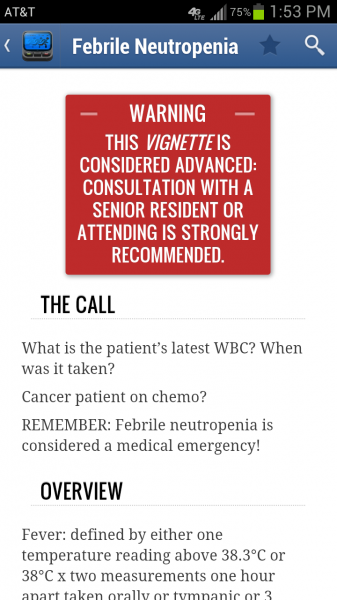 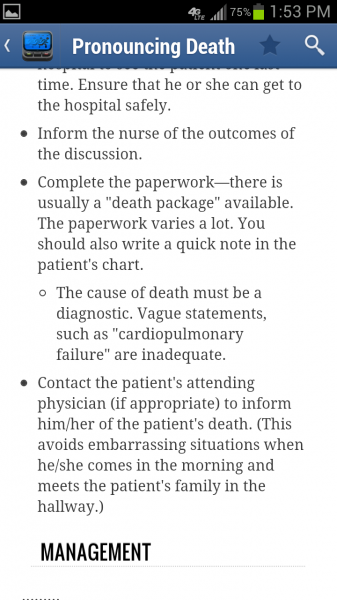