The Logitech Ultrathin Keyboard Cover Review, A Perfect Fit for Most iPad Users

We have been paying close attention to the iPad keyboard market since the iPad’s release in 2010 because the typing experience on a touch-screen keyboard is lacking.

In Feb 2012, I compared the top 9 keyboard cases for the iPad that was available on the market at the time, and my favorites were the ClamCase ($149) and Adonit Writer ($99).

Since that time, Logitech has released the Ultrathin Keyboard Cover, which is essentially a hybrid between Apple’s magnetic Smart Cover and a keyboard.

I’ve now owned the Logitech Ultrathin Keyboard Cover for about 6 months, and it has become my top recommendation for iPad keyboard cases.

Most iPad owners, including most medical professionals, only require a physical keyboard in particular instances (e.g. Working on an article/essay/presentation, writing a longer e-mail, etc), and the Ultrathin Keyboard is slim and light enough to be there when needed, and get out of the way when not. 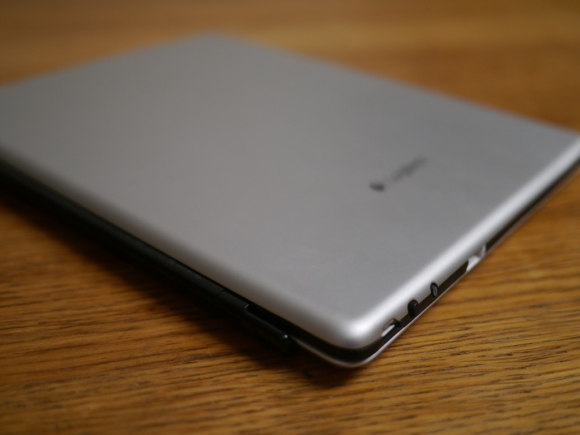 The Ultrathin Keyboard is deceptively simple. It’s about as thick as the iPad 2, (compatible with the iPad 2, as well as the 3rd and 4th  generation iPad) has a similar metallic finish to the silver backing of the iPad, and functions as a Smart Cover with its magnetic hinge. The keyboard side of the cover comes in several different colors: black, white, and red. The magnetic hinge allows it to magically snap tightly to the side of the iPad, and allows the iPad to automatically sleep/wake when the cover is closed. When attached, the iPad and Keyboard combo nearly resembles a thin, smaller closed MacBook Pro.

Perhaps one of the key features of this keyboard case is that it is incredibly thin and light. As described in my previous comparison, most keyboard cases on the market are quite bulky. The Ultrathin iPad Keyboard is, well, ultrathin, and actually feels almost like an iPad 2 on its own. This light size allowed me to stow it permanently in my bag.

It was always available when I needed to type, but it never felt like a burden to carry around. 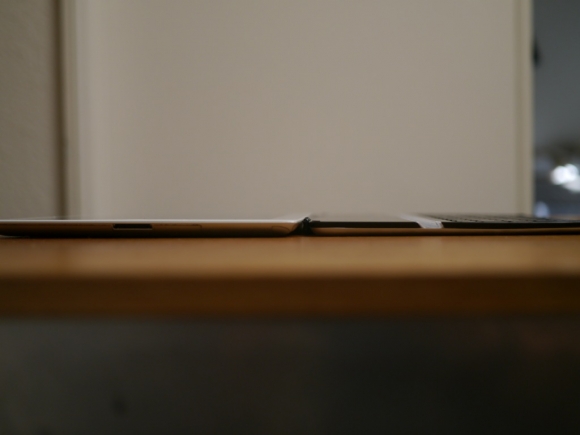 The build quality all-around is incredibly high. The metallic sheen of the back of the Keyboard Cover matches the simple design of the iPad’s own back, and the keyboard side is simple and sturdy.

In its simplicity, the Keyboard Case has a glaring absence: it does not protect the back surface of the iPad, much like the Apple Smart Cover. This didn’t bother me because I prefer keeping the back of the iPad visible in its “naked form” (with a thin protection film for scratches), but this could be an issue for people concerned with drop protection. On the plus-side, the Keyboard Cover is 100% compatible with screen protectors and films. 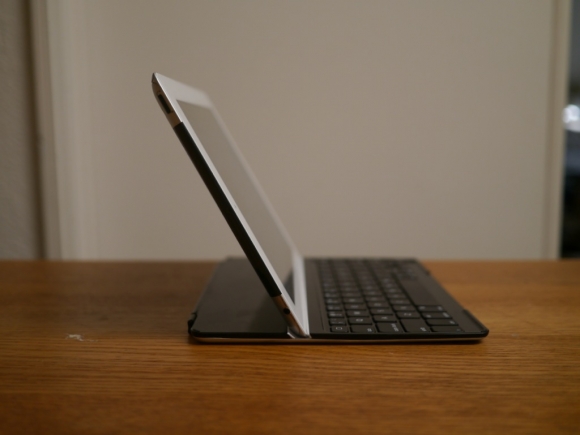 To use the keyboard, you detach the Keyboard Cover’s magnetic hinge, and place the iPad in the groove. The iPad can be rotated in any direction (landscape or portrait), although there is a magnetic strip in the groove that adds a special grip when the iPad is in landscape orientation with the home button on the right. This is also the most natural orientation for the iPad, as it requires the least adjustment from having the Keyboard Cover attached as a smart cover.

The groove that props the iPad up only holds the iPad at one angle, but the chosen angle was never an issue in practice. The angle was appropriate when seated at a table, when using the keyboard to type on my lap at a conference, and when standing and typing at a nursing station.

Like every other iPad keyboard, the Ultrathin Keyboard Cover syncs to the iPad via Bluetooth (check out our tutorial video on how to set this up). 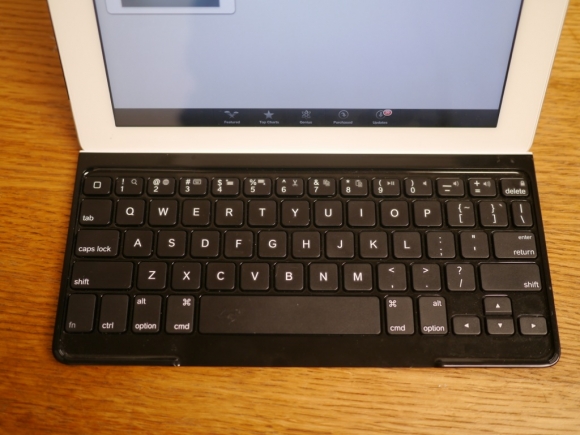 The keyboard performs excellently, except for the oddly placed Home Button

Despite not being completely full-size, the keyboard and typing experience on the Ultrathin Keyboard Cover is near-perfect. Logitech opted to use the increasingly popular “Chiclet” type keys made famous in MacBooks.

Despite the smaller size, the spacing of the keys rarely felt compromised, and 99.9% of the typing I did felt quite similar to typing on a full-size keyboard. As a fast typist, small inconsistencies in a keyboard spacing or layout can slow me down significantly on non-traditional keyboards, but there was virtually no transition period required to type on the Ultrathin Keyboard Cover. When it comes to typical pitfalls of smaller iPad keyboards (e.g. overly narrow “delete” keys, odd placement of the symbols, “control,” “cmd,” and direction keys) the Logitech keyboard passed with flying colors… except for one frustrating miscue.

Curiously, Logitech decided to place a hotkey for the iconic iPhone/iPad square Home Button on the keyboard to the left of the “1” (or “!”) key, where the “ ` ” (or  “~”) key typically is. On occasion, I will instinctively press the tilde (“~”) key, and instead be exited out of the app into the iPad Home Screen, which is frustrating. Thankfully, this does not happen very frequently.

Despite this one flaw, the typing experience on the Ultrathin Keyboard Cover is essentially without compromise. 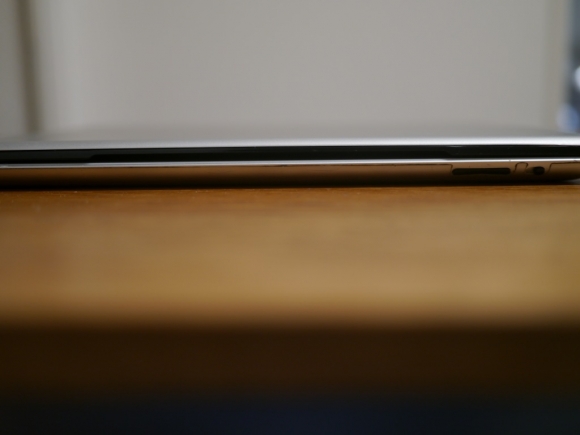 The Ultrathin Keyboard Cover is so light and thin that I leave it in my bag all the time. If I need to type up a longer e-mail, or swing by a coffee shop to work on another article, I switch out my Smart Cover for the Ultrathin Keyboard, and typing is a breeze. When I’m just walking around the hospital, or lounging around the house, I will carry around my iPad with the paper-thin Apple Smart Cover (or no cover at all). For the few people that require a keyboard with their iPad all the time, more permanent cases such as the ClamCase might be better suited. However, most iPad users (especially physicians) will find that they don’t need an actual keyboard for the majority of their uses.

Continuing with this theme of simple utility, the Ultrathin Keyboard Cover’s Battery Life is insanely long. Logitech advertises a 6 month battery life (based on average use of 2 hours a day). As an owner of the Keyboard for about that time, I can confirm this claim.

As mentioned above, since I often carry around my Keyboard Cover in my bag and use it on an as-needed basis, having a significant battery life plays a huge role. The battery is rechargeable (via micro USB), and the keyboard automatically shuts off if not in use (or if you forget to switch off it’s on/off switch).

Lastly, the keyboard functions beautifully when called upon as described above in the Keyboard section. I am continuously impressed every time I use it by how seamlessly the transition takes place from going to a full-size keyboard to the smaller keyboard. While smaller, it does not feel cramped, and the feedback and give of the keys are impressive for such a thin case. 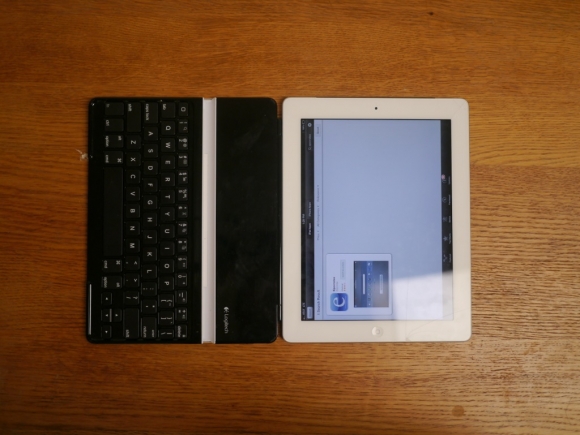 Therefore, when not using the keyboard, it starts to become a hindrance by forcing you to either set aside the Keyboard Cover, or use it solely as a stand to prop up the iPad. There is no option to just fold the keyboard against the back of the iPad. While a clear downside if you are only walking around with the iPad and the Keyboard cover all day, I found that in most situations where I was using the keyboard, I actually appreciated the ability to easily and quickly decide whether to carry around the keyboard or just leave it behind.

Furthermore, the select users who will be using a keyboard with their iPad for a majority of the time will probably want to select a better permanent option, such as the ClamCase. The strength of the Logitech Ultrathin Keyboard Cover is the fact that it is so easily attached and detached, but this could be frustrating if not desired. For example, if the iPad is a dedicated unit for your office or clinic, it might be preferable to opt for a case where you can securely and more permanently slip the iPad into a cloth pocket or snap it into a frame.

These suggestions, though, are not so much negatives as they are disadvantages for certain types of users, which represent a small minority of iPad owners.

However, in use, I realized that Logitech knew what I actually needed: simplicity. Their design made me realize that the utility of an easily attachable and detachable keyboard via the magical magnetic hinge (like the Apple Smart Cover) was the most important thing of all. It made me realize that I actually don’t require a physical keyboard as often as I thought, and that the reason I often left other keyboard cases at home was because they were too bulky and even too versatile.

Now, I leave my Ultrathin Keyboard Cover in my bag all the time, and attach it for the occasions when I want to sit down and type. For all other times, it magically snaps off and goes back in my bag.

Like many Apple products, the Ultrathin Keyboard Cover is not for everybody (primarily people who require a physical keyboard at all times as part of an EMR), but I believe that it will be exactly what a majority of iPad owners are looking for.