Several recent announcements of new technologies developed at US and EU research institutes have the potential to radically change the lives of the millions of diabetics who suffer multiple daily finger pricks to test their glucose levels.

Earlier this summer I reported on a researcher at the University of Akron who has developed a smart contact lens and smartphone application capable of monitoring glucose levels in tears. Similarly, last month researchers at Purdue University announced they have created a new type of biosensor that can detect minute concentrations of glucose in four human fluids – blood, saliva, tears, and urine.

“It's an inherently non-invasive way to estimate glucose content in the body,” said Jonathan Claussen, a former Purdue University doctoral student and now a research scientist at the U.S. Naval Research Laboratory. “Because it can detect glucose in the saliva and tears, it's a platform that might eventually help to eliminate or reduce the frequency of using pinpricks for diabetes testing. We are proving its functionality.”

“Most sensors typically measure glucose in blood,” Claussen said. “Many in the literature aren't able to detect glucose in tears and the saliva. What's unique is that we can sense in all four different human serums: the saliva, blood, tears and urine. And that hasn't been shown before.”

The sensor is featured in a paper published last month in the journal Advanced Functional Materials. The sensor has three main parts: layers of nanosheets resembling tiny rose petals made of a material called graphene, which is a single-atom-thick film of carbon platinum nanoparticles and the enzyme glucose oxidase.

“Typically, when you want to make a nanostructured biosensor you have to use a lot of processing steps before you reach the final biosensor product,” Kumar said. “That involves lithography, chemical processing, etching and other steps. The good thing about these petals is that they can be grown on just about any surface, and we don't need to use any of these steps, so it could be ideal for commercialization.”

Earlier this month, researchers at the Fraunhofer Institute for Microelectronic Circuits and Systems IMS in Duisburg, Germany announced another major breakthrough in biosensor technology which not only eliminates the need for finger pricking, but also achieves major advancements in minimizing the sensor footprint and power consumption. The principle of measurement involves an electrochemical reaction that is activated with the aid of an enzyme. Glucose oxidase converts glucose into hydrogen peroxide (H2O2) and other chemicals whose concentration can be measured with a potentiostat. 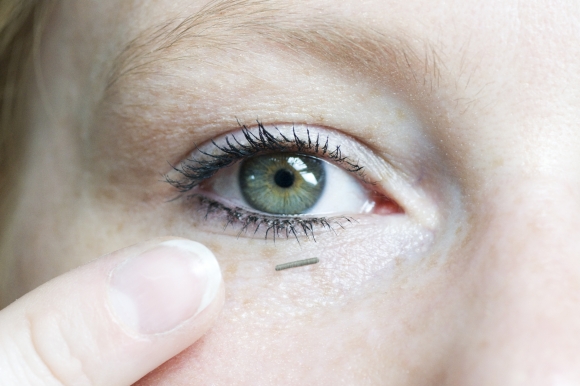 Amazingly, the biosensor, which measures at a mere 0.5 x 2.0 millimeters (pictured above), can fit the entire diagnostic system on it complete with wireless transmission capability which can send data to a mobile device.

Another major advancement of the German engineered biosensor is that it uses passive data transmission to minimize power consumption, enabling patients to wear it for weeks, or even months, at a time. Additionally, the sensor can be supplied with power wirelessly through radio frequency. Talk about jaw dropping capabilities.