The app offers straightforward and interactive anatomy identification functionality that serves as a one-of-its-kind study tool for students preparing for those difficult neuroscience and neuroanatomy classes at universities or medical schools.

These images may be nostalgic for some since many of us have used these exact images during our days back in school.

I remember the frustration I felt in attempting to memorize the subtle neuronal structures for the first time in my own neuroanatomy class. At the time, although supplemented by lectures and occasional microbiology labs, the content of my course was almost completely derived from Haines’ textbook, Neuroanatomy – An Atlas of Structures, Sections, and Systems.

Because of the unforgettable difficulty level, neuroanatomy has been one of the most impressionable classes I have ever took. I would have definitely appreciated any additional study material to help me at the time. Now, a quick course catalog search at my old school shows that Haines’ textbook is still being used for undergraduate and graduate level neuroscience courses. 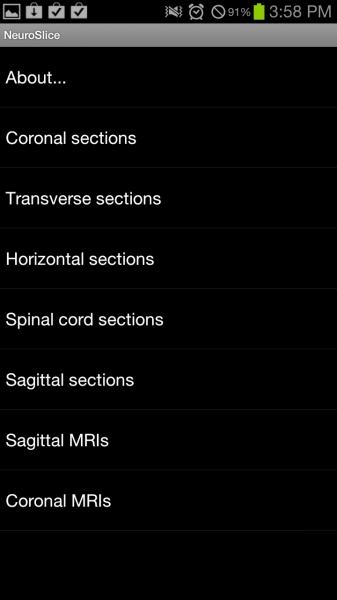 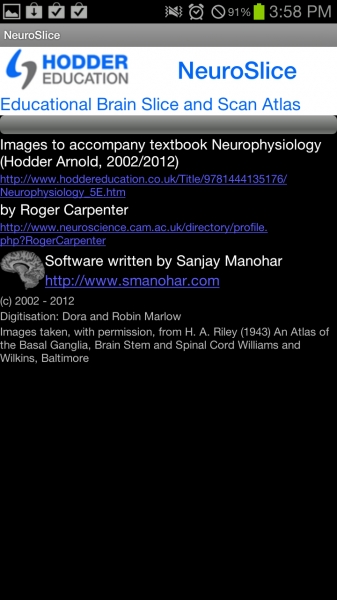 NeuroSlice attempts to facilitate students (like me back then) to master this subject through the same images and presentations used by many university neuroanatomy courses. Although the images may seem crude and may not correlate much with actual clinical experiences, it still offers a fundamental appreciation of true microscopic presentations of these delicate structures that relates more to research practices.

Compared to colorful diagrams and 3D models that most other anatomy apps focus on, NeuroSlice offers a different approach that stands out among the crowd on Google Play. 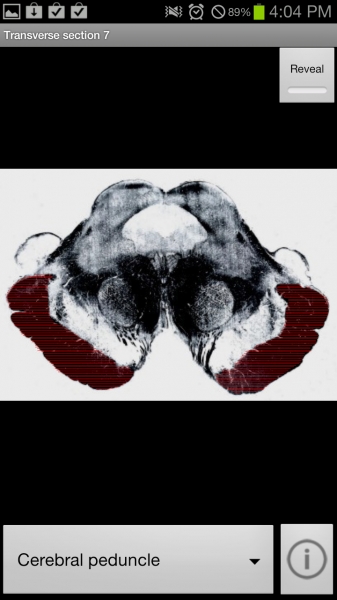 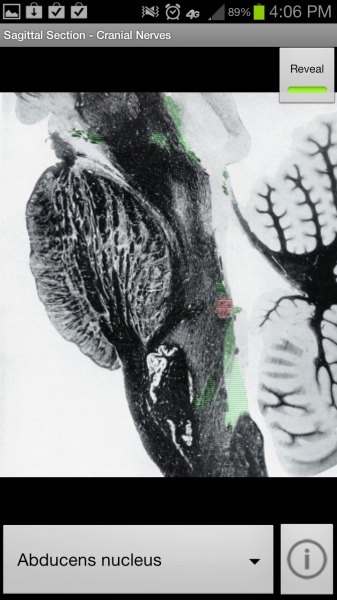 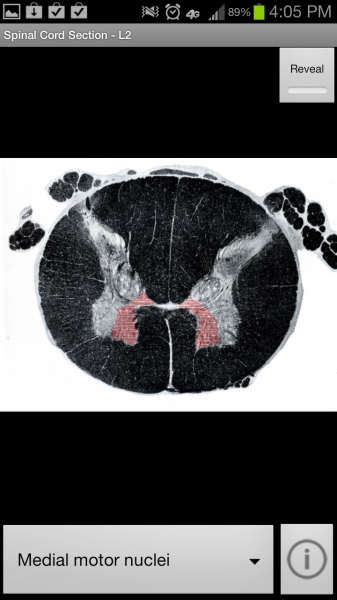 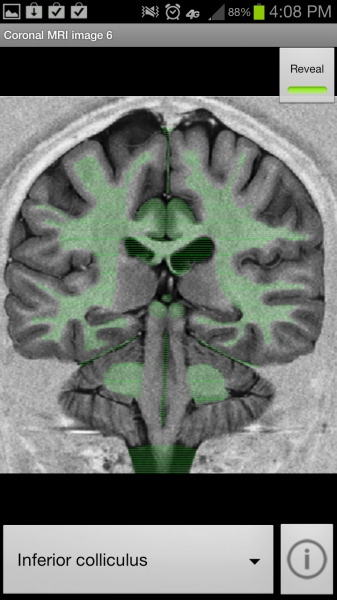 Neuroslice consists mainly of stained specimen sections and some small amount of brain MR images as well. Most of the images focus on the diencephalon, brainstem, and spinal cord structures, which is reasonable since most of the complicated nuclei and neuronal tracts are located in these regions. The midbrain sections are separated into coronal, transverse, horizontal, and sagittal sections, while the spinal cord images are taken from the cervical, thoracic, lumbar, and sacral levels. The MRIs are divided into sagittal and coronal sections. 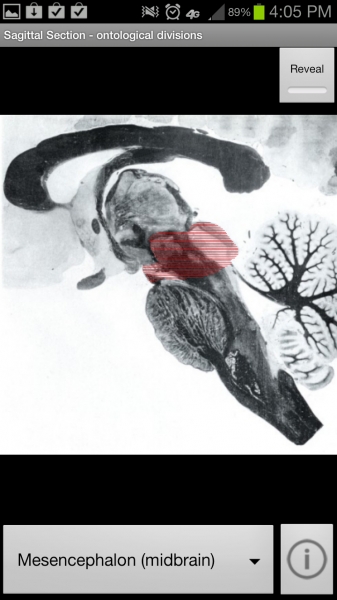 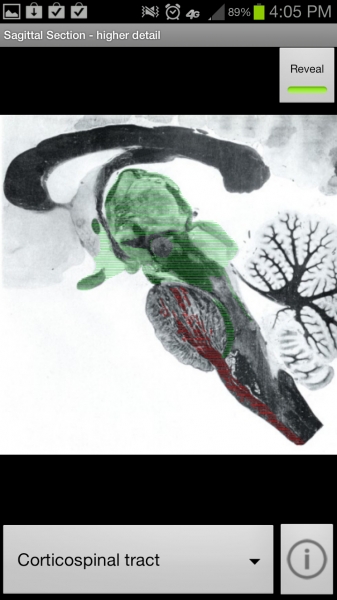 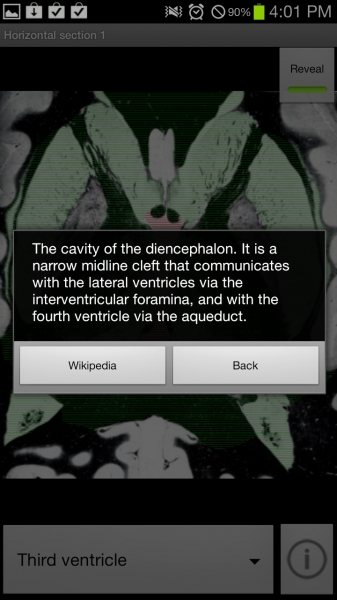 Each image is selectively tagged to reflect the important structures at each level of interest, which may be difficult to identify at first, but, fortunately, the “Reveal” button and the pull down menu will direct users to the tagged structures.

For each item selected, a tap on the “Info” button will give users a brief pop-up description of the structure of interest provided with a quick link to its corresponding Wikipedia page. 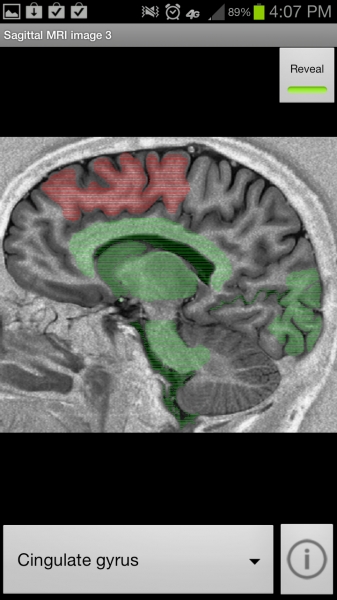 The MRI images turn out to be quite useful as well, and provides more of a macro view on the brain to keep the scale of structures in perspective. 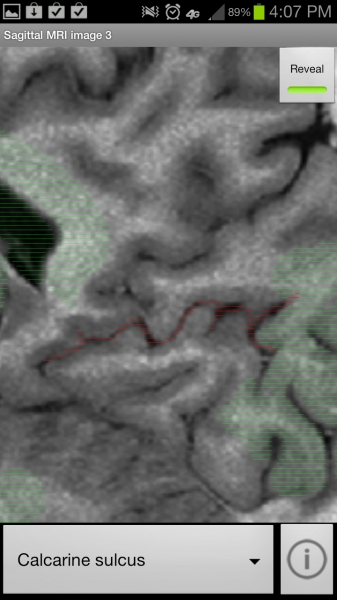 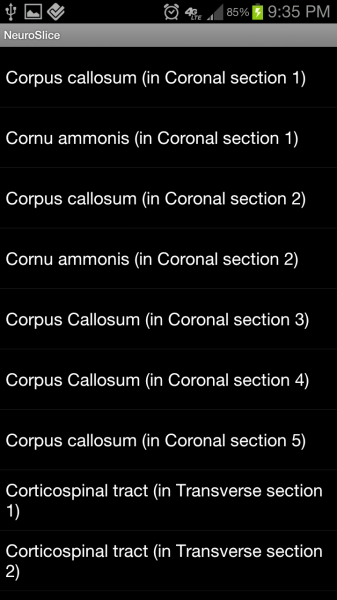 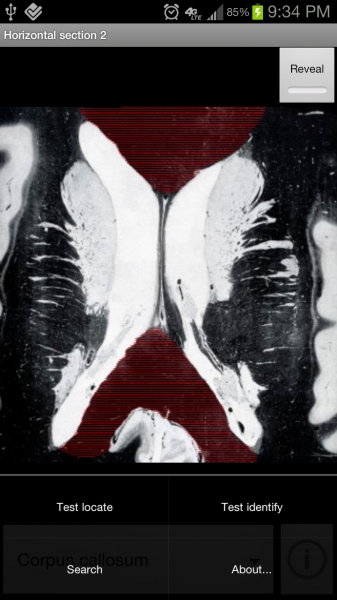 Lastly, the miscellaneous functions that are quite universal to anatomy apps are not left out by NeuroSlice. Pinch-to-zoom and universal search options are unsurprising available for users. For those who may want to test put their knowledge to the challenge, self-quizzing options are available under the in-app menu.

There are many aspects of this app that could be improved on, but, in my opinion, it serves its purpose and achieves its goal rather well already. Of course, more slides and more descriptions would always be welcomed, but I would like to comment on existing issues of the app in hopes the developers may address in their next update. 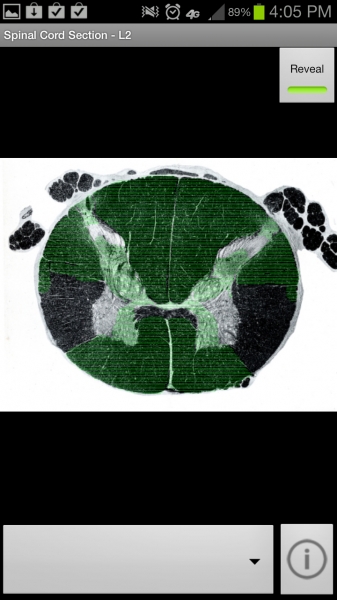 First, the most obvious fault is the lack of structures and details tagged to each image. There are often large areas or distinct structures that are sometimes ignored throughout certain series of images, which would likely make me uneasy if I were still preparing for neuroanatomy exams. 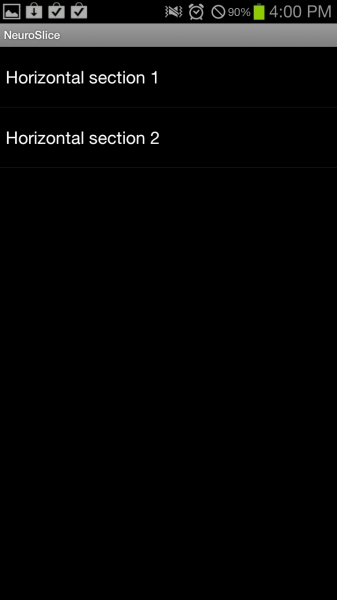 Second, the division of the midbrain images are divided into coronal, transverse, horizontal, and sagittal sections in the app, which not only varies from clinical divisions of human anatomy, but is quite odd as well because of the extra dimension. The images on the horizontal sections seem to correlate with some from the transverse sections, but this may perhaps be exactly how the textbooks have divided these sections. Speaking of the images, there are only 2 under the horizontal section which is definitely too scarce to be helpful.

The last major negative aspect is the faulty navigation design within the app. The search function and pull-up menu does not work unless you actually have an image opened, which seemed rather unintuitive. Because of this, I did not even realize there was a pull-up menu until a couple days into using this app.

Also, I have noticed quite a lot of empty space when browsing through the images, and I think having dedicated buttons to switch between images would be helpful. Being able to scroll through images in sequence would allow users to directly observe transitions of specific structures instead of having to jump back to the selection screen again and again.

Overall, NeuroSlice is a great supplement to textbooks and functions well as a quick review of important structures that might be emphasized in neuroanatomy classes. The old-fashioned presentation of the images in NeuroSlice is not only nostalgic, but helpful in its own unique way, especially in the research laboratory setting.

However, due to limitations in the quantity of data and images, the app is definitely by no means a replacement for actual classes or textbooks.