Ultrasoundpaedia is an online educational website aimed to educate students, residents, and technicians in the art of ultrasound.

Originally developed by two sonographers, Ultrasoundpaedia has built quite a comprehensive library of resources focused on none other than sonography.

Ultrasoundpaedia has recently released a series of ultrasound apps on the Android platform, ranging from obstetrics and pediatrics focused apps to abdomen and vascular ultrasound studies.

There aren’t too many competing sonography apps out there on Google Play yet other than the ultrasound apps from “Imago.” For now, let’s dissect Ultrasoundpaedia’s Vascular Ultrasound app as sort of a representation of their overall series.

Some would argue that ultrasound is the best imaging modality that medicine has to offer. Ultrasound is quick, portable, safe, and easily the most cost-effective method of imaging without the risks of radiation exposure. With improvement in ultrasound technology and software algorithms, the resolution and power of ultrasounds have only been improving.

As ultrasounds units continue to decrease in size, proven by GE’s Vscan mobile pocket ultrasound, this imaging modality will only become more ubiquitous and play increasingly important roles in the delivery of quality patient care.

There are well-known downsides to ultrasound, especially it’s infamous “operator dependent” nature. Performing ultrasound requires skill and experience, and because of this, sonographers play a critical part in ultrasound studies. The quality of a study relies heavily on the sonographer. For physicians, especially radiologists, not only is being able to interpret ultrasound images important, being familiar with protocols and technique is just as crucial in formulating a diagnosis and producing a quality report.

Radiologists are usually required to demonstrate ultrasound skill sets with sufficient quality. Only by understanding these different aspects of ultrasound will one truly appreciate the technicality and intricacies of ultrasound. For radiology residents, acquiring the skill sets and experience can be difficult. 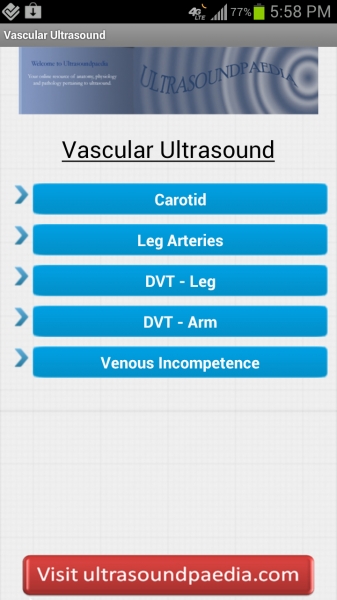 Vascular Ultrasound loads up with a menu of different ultrasound studies that will sound familiar to all lot of those who have worked in the clinic or hospital environment. The studies listed are the most common types of studies pertaining to vasculature, including extremity and carotid duplexes.

However, the list is far from being comprehensive and missing are some less frequently ordered studies such as vein mapping and ankle-brachial indices. Also, for some reason the app has omitted renal artery studies despite having it available on Ultrasoundpaedia’s website. In comparison to Ultrasoundpaedia’s website, users will soon notice that the discussions for each topic only consists of “normal” findings. The “pathology” discussions that are available on the website are nowhere to be found on the app. 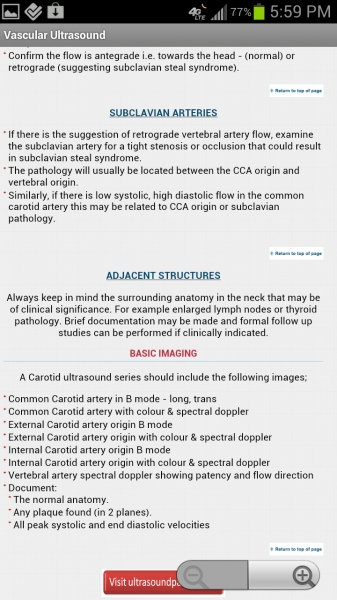 After selecting the study of interest, users are directed to what appears to be a mobile webpage discussing the topic of interest. Except for some formatting differences, the content and layout is identical to the app’s website counterpart. Although the app seems to be retrieving online content, I was able to load these articles offline in airplane mode, indicating that these articles are still locally stored.

Usually, mobile webpages–or webapps–disguised as actual installable smartphone apps are typically a major disappointment for me, but this time around I found myself not minding as much. Perhaps the webpages are designed friendly enough for mobile use that the overall experience stays consistent and isn’t really affected. 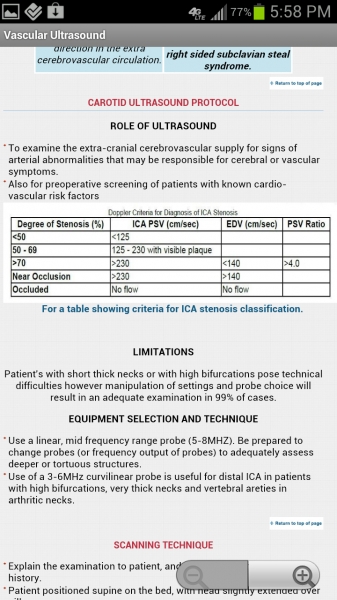 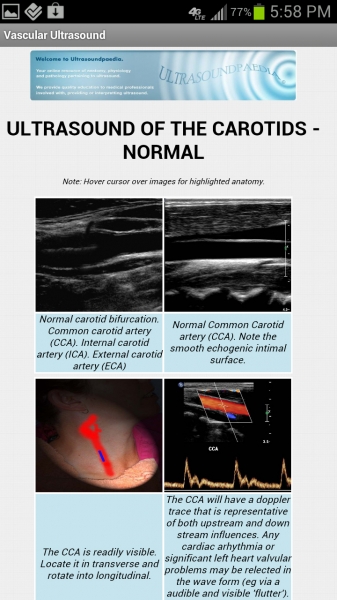 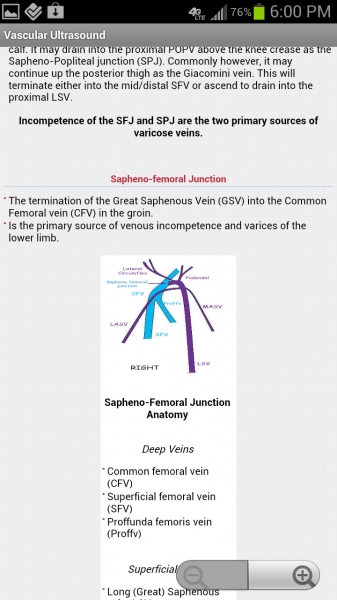 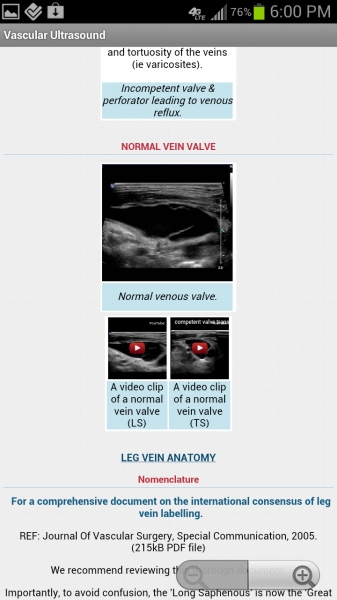 Each study is divided into several sections, touching topics regarding anatomy, normal ultrasound appearances, waveforms, techniques, limitations, and standard protocols. The content is concise and nicely written, supplemented by a host of media including colored diagrams, GIFs, and YouTube videos. At times the articles may be long, and because navigation is mainly through up and down scrolling, the developers have included buttons throughout the each article to return you to the top of the page. 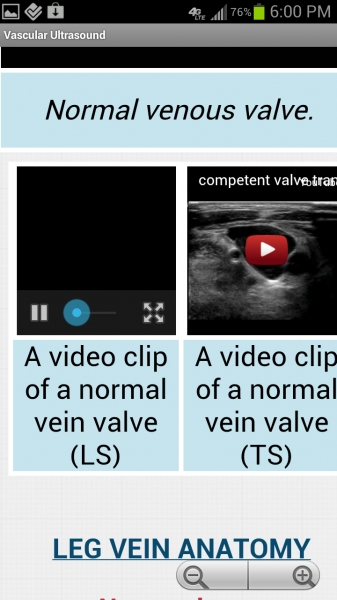 Other than the previously mentioned drawbacks, there are several additional disappointments to the overall design of the app as well. Due to the mobile webpage approach to their articles, navigation tools are essentially absent. Scrolling through the articles generally relies on finger swipes and “back to the top” buttons, which definitely reduces the sophistication and quality of the app.

Even the website counterparts have side menus to assist with navigation. Other than that, some formatting issues exists. For example, under “Venous Incompetence,” the two YouTube video clips embedded in the article are too small to watch due to the limited allocated size. Even though I was able to play the videos, for some reason, I was unable to full screen the videos to watch.

Poor navigation design, formatting issues, and absent content in comparison to the Ultrasoundpaedia website really discourages me from using the app at all. I find myself preferring the website while sitting at a computer most of the time. However, the vasculature content on the website appears to be free and has allowed me to make the previously mentioned comparisons without additional costs.

Accessing the website content for other ultrasound categories requires a membership subscription that could become quite pricey, and isn’t translated through the purchase of the corresponding app. The online website seems to provide much more than articles, too, which is another reason I would opt out of purchasing further Ultrasoundpaedia apps and subscribe for a membership instead. I do not see a benefit for keeping this app on my phone for now and will be removing it soon from my phone.