Above all else, being able to add more labs will allow the user to expand the library beyond 256 lab tests. The liberating customization features in Lab Values+ is definitely a game-changer that brings sustainability and substantial functionality to the app.

To be critical, there are still several downsides to Lab Values+. First of all, their list of lab tests is far from comprehensive and actually fails to prove sufficient even for medical students. Important lab tests, such as renal electrolytes, RPR, serotonin release assay, and procalcitonin, are missing. With up and coming crucial lab tests on the horizon, this will become even more of an issue. The developers make up for this disadvantage by adding customization options.

However, in order to make a sufficient app, users will be required to invest a lot of their own time and effort into gathering and inputting the data themselves. If users are expected to invest time to customize this app, then the issue of preserving that data and sharing it with other devices becomes important as well. Perhaps the developers may consider including an export function on their next major update. 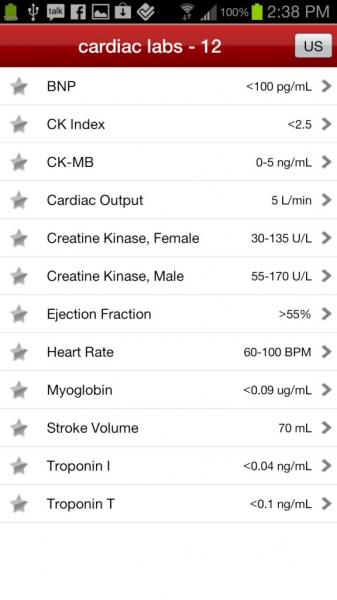 Speaking of lab tests, the developers have included Heart Rate, Stroke Volume, and several other “Lab Values” that really do not require laboratory processing and should not belong in this section of the app. In my opinion, the developers should remove these entries to boost their credibility and allow users to maintain their confidence in the developers. 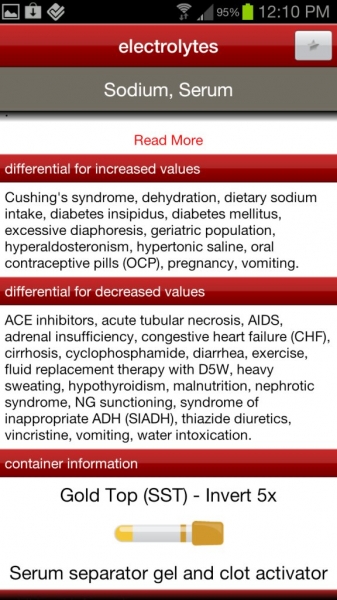 The developers have nicely attempted to include differentials for each lab entry, which is definitely a welcomed feature. However, generating differentials based on one single lab value is a daunting task and can result in very, very long lists of differentials. In the clinical setting, patterns or trends are usually discerned from lab results evaluated as a whole to facilitate diagnoses.