Researchers at Penn State University have discovered a new technique that uses acoustic waves to sort cells on a chip which may lead to miniaturized diagnostic medical devices. The technology uses two or more beams of sound waves to act as “acoustic tweezers” to sort a continuous flow of cells on a chip approximately the size of a dime.

The cells can be filtered into five or more different channels by simply changing the frequency of the acoustic waves. Most current cell-sorting technologies can only sort into two separate channels in one step and the cells must first be encapsulated into droplets.

“Eventually, you could do analysis on a device about the size of a cell phone,” said Tony Jun Huang, associate professor of engineering science and mechanics. “It’s very doable and we’re making in-roads to that right now.”

Huang and his team published their findings in the current edition of Lab on a Chip. Huang briefly explained the development process in a post announcing the discovery on Penn State’s website. The acoustic wave cell-sorting chip was created using a layer of silicone and two parallel transducers which convey alternating current into acoustic waves placed at the sides of the chip. As the acoustic waves interfere with each other, they form pressure nodes on the chip and, as the cells cross the chip, they are channeled toward these pressure nodes.

“Today, cell sorting is done on bulky and very expensive devices,” said Huang. “We want to minimize them so they are portable, inexpensive and can be powered by batteries.”

The team first tested the device by sorting a stream of fluorescent polystyrene beads into three channels. They were able to slow the particles flowing across the chip unimpeded prior to turning on the transducer. Once the transducer began producing the acoustic waves, the particles were separated into the channels. After completing this initial proof-of-concept, the research team sorted human white blood cells that were affected by leukemia, first focusing the cancer cells into the main channel and then separating them into five channels. 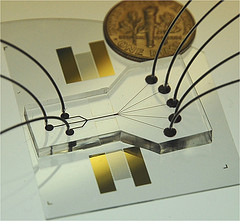 “We can do more,” Huang said. “We could do 10 channels if we want, we just used five because we thought it was impressive enough to show that the concept worked.”

By discovering a way to efficiently and intelligently sort cells on a silicon chip, the PSU researchers have created a lab-on-a-chip device with immense potential to quickly find significant commercial applications, not to mention the fact that the prototype they have built should be relatively easy and inexpensive to manufacture at scale. The team is already speculating that they may have cracked through one of the biggest barriers currently facing the many hundreds of startups and inventors toiling to build the first medical tricorder device.