Parents, especially first-time parents, spend hundreds of dollars on baby monitors. These devices are great, but it’s hard to look at them and not think there must be a better way.

Rest Devices, a Boston-based startup formerly known as Nyx Devices, thinks they have found a better way to monitor sleeping infants – a wearable baby “onesie” with built-in sensors that transmit the baby’s vital signs over Wi-Fi to parents’ smartphones, tablets, or other connected devices.

“New parents want to know how their baby is doing at all times,” says CEO Thomas Lipoma. “This can tell you if your baby is on her stomach or her back, if her temperature spikes, if she’s moving around, and if she’s breathing normally.”

The company, which was founded by three MIT students, had previously been focussed on developing a shirt with sensors embedded for use during sleep studies and by researchers. While they still offer this product via their website, the company has refocused all of its efforts on developing and marketing the onesie.

The onesie has sensors embedded in the flexible green stripes shown on the front of the picture which will measure the child’s respiration as she inhales and exhales throughout the evening. Temperature and movement sensors will be built into the Turtle, also seen in the image, which the company currently manufactures using a 3D printer at their Boston headquarters. 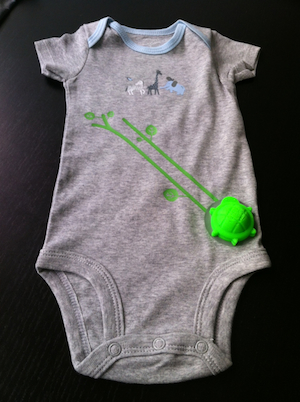 The company has raised $500K so far to cover the costs of product development and indicated in a recent article on Boston.com that it may raise more to support its marketing and sales efforts once the product is ready for mass distribution.

They are aiming for a price-point between $100-200, which would include three onesies, a small turtle-shaped transmitter that clips to the front with magnets, and a plug-in base station that will send data from the nursery over the home Wi-Fi to the device of the parents’ choice. 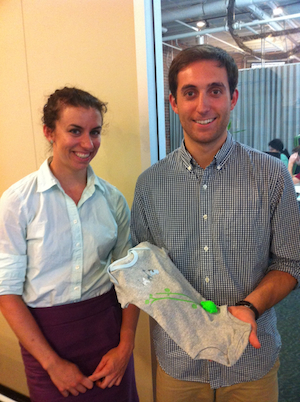 I think this product has enormous potential, and I think the team at Rest Devices made a very wise decision to pivot slightly away from developing the sleep study shirts to focus on the pediatric market. There is nobody who can be counted on to spend money on digital health products more than the parents of little kids, so in my opinion, the companies developing the most attractive and easy to use parenting products are going to be the big winners in the early stages of the digital health revolution.