From physician to app entrepreneur, one perspective

At the recent Medicine 2.0 Congress, Dr. Jennifer Dyer, the Chief Medical Officer and founder of Duet Health (“The Mobile Patient education Experts”), led a session entitled “Physician Entrepreneurship and App Development: How Did I Do It.”

Dr. Dyer told her unique story of how she stopped practicing medicine to focus on her entrepreneurial mHealth interests and various strategies for making money in this business sector.

Ways to make money with apps

Dyer began her talk with the bottom line: how can someone actually make money on apps.

The four basic ways were:

Who should you sell to?

Dyer also talked about making money by selling to consumers (B to C businesses) and making money from selling to other businesses (B to B).  Her business takes both approaches.  On the B to C side, Dyer focuses on structuring apps well. Since her apps focus on behavior change, she uses BJ Fogg’s health behavior model as a guide for structuring apps. This model focuses on sustained positive health behavior. It focuses on the notion that motivation, ability, and triggers work together to illicit a behavior. Dyer uses this theory to offer various types of triggers for individuals who use her company’s apps – such as iTunes rewards. 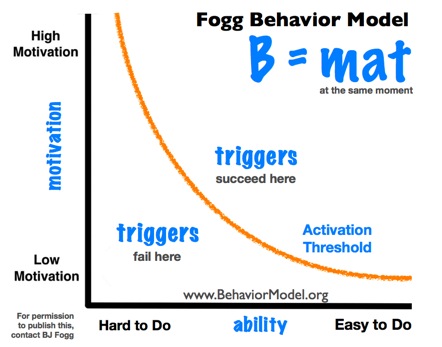 On the B to B side, Dyer searches for unique business partnerships that promote her consumer apps. Dyer discussed her thoughts on the flow of cash in the health care system as a way of identifying the best B to B approach. Her view of who pays for health care led her to focus on employers.

She provided the example of one employer who was paying $450 K for unnecessary hospitalizations. Developing apps to decrease these hospitalizations could save the company money. This model yields more revenue than the B to C approach because companies pay more for the apps and subsequent improvements. Also, employees can be incentivized to use the apps by the employer, who is usually offering the app for free. Dyer also discussed how insurers can save money from the use of apps that change patient behavior. She indicated that one of the most successful apps to date has been iTriage because it is promoted by Aetna to their beneficiaries.

However, underlying the success of the apps is information that indicates it is likely to change behavior. So, research – either preliminary positive findings or more extensive positive research findings – can increase the potential of success.

Dyer spent a little time talking about the growth of app businesses. She focused on increasing the number of users – either through B2C or B2B methods, making apps available on mobile devices with less features than smartphones (what she labeled “dumbphones”), and searching for new partnerships – such as partnering with pharmaceutical companies who are interested in encouraging behavior change along with the prescribing of their drugs in order to improve outcomes.