One of the hottest trends in the mHealth market is the rapid adoption of wearable fitness monitors such as Striiv, Nike Fuelband and Fitbit.

Most of these devices are still in their first generation, and at least one has proven to be miserable failure, the Jawbone UP, for which the company was forced to offer a full refund  after the device began failing in large numbers shortly after shipping last year.

This week has seen the launch of three new activity monitors from two different companies, all of which utilize the Bluetooth Smart protocol for transferring data to smartphones or tablet devices.

The Fitbit Zip offers users a new smaller form factor, a tiny “tap interface” display, and a replaceable battery that will last as long as four-six months before it runs out of juice. The Fitbit Zip is less expensive than other Fitbit devices at $59.95 and tracks steps taken, distance traveled, and calories burned.

The Fitbit One will replace the Fitbit Ultra and includes a few new features which make incremental improvements on the Ultra device. It will include tracking of steps, distance, calories burned, stairs climbed, and will also track how well users sleep, similar to the Fitbit Ultra, though this updated version of the flagship device will include a new Silent Wake alarm feature that will vibrate the device at a scheduled time to only wake up the wearer.  It will be available in black and burgundy and cost users $99.95.

Fitbit also announced it will be updating the complimentary smartphone app to enable the devices to upload data captured over time without the user needing to open the app and sync.

The third device launched this week was the Fitbug Air, which also features Bluetooth Smart technology for wireless data transmission, is the cheapest of the three. The Air costs just $29.99 plus $3.99/month for one year of the company’s premium online wellness coaching services which includes personalized weekly activity targets, meal plans, online communities and support and weekly newsletters.

The device also comes with an extra replacement battery. 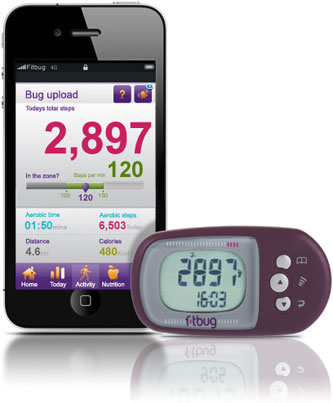