TechCrunch is reporting physician social network Doximity (@Doximity) has raised a $17 million Series B round led by Morgenthaler Ventures. TechCrunch is also reporting the deal valued Doximity at $80 million, an impressive number for a startup less than two years old.

“We’ve been following Jeff Tangney and the Doximity team for more than three years,” said Rebecca Lynn, partner at Morgenthaler Ventures. “We’ve had an extensive thesis in the Health IT space for some time, and Doximity stood out as a company that is solving a significant problem in a sizable market.”

Doximity was launched as a LinkedIn-type social network for doctors and following its first round of funding 18 months ago they added a newsfeed feature which allows docs to post messages to colleagues discussing patients on a fully secure and HIPPA compliant platform.

In less than two years since going live the company has managed to sign up 1 in 7 US physicians, as well as inking deals with three of the top five medical schools (Stanford, UCSF, UPenn) to run their alumni networks. 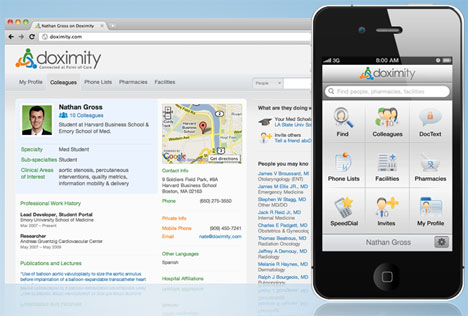 “Physicians spend hours waiting on hold, shackled to fax machines and archaic systems that are not interoperable or even interconnected,” said Jeff Tangney, Doximity founder and CEO. “Doximity connects physicians while protecting both their own and their patients’ privacy.”

This second round of funding brings the total amount of capital raised by Doximity to $27.8 million. Founder Jeff Tangney has been one of the most successful digital health entrepreneurs to date having founded Epocrates, which he took public in early 2011. In an article in Forbes last month, Tangney looked back on his entrepreneurial exploits and explained how difficult it can be to get VC to understand why they should invest in businesses targeting physician customers.

“Marc Andreessen says software is eating the world, but we’re having a lot of indigestion in health care,” says Tangney. “It’s hard to come up with revolutionary ideas in a slow-moving, heavily regulated industry.”

The next step for Doximity is figuring out its business model. Currently the company generates revenue by connecting research groups and law firms with expert doctors in their network and charging those businesses a fee.