[This is a preview of some of the exciting mHealth research being presented at the this week’s Medicine 2.0 Congress on September 15-16. This abstract and others are candidates for the iMedicalApps-Medicine 2.0 mHealth Research Award]

According to the American Heart Association (AHA) nearly 383,000 out-of-hospital cardiac arrests (OHCA) occur every year in the US. A sudden cardiac arrest is a race against time –  every minute without lifesaving attempts the chances of survival decrease by 10%. With effective bystander cardiopulmonary resuscitation (CPR) immediately after arrest, chances of survival can be doubled or even tripled.

Every year the American Heart Association trains over 12 million people in CPR, a lifesaving skill that can prevent unnecessary deaths at home, work or anywhere else. Sadly, even though many people know how to save a person’s life, only 32 percent of  victims in the US receive CPR from a bystander according to AHA.

In Sweden with 9 million inhabitants, some 2 million people have the skills of CPR. The Swedish Cardiac Arrest Registry annually gathers information on some 4500 OHCA and in 2011 65 percent of the victims received CPR from a bystander. So the figures in Sweden are a little better, but still not good enough.

A team at Södersjukhuset hospital in Stockholm, Sweden decided to try to change this.

“We want to give people trained in CPR a chance to use their skills and also give OHCA victims a better chance of survival” says David Fredman, RN and project manager in the Mobile Lifesaver project.

In an attempt to use the skills of CPR trained lay persons a new concept has been developed in Stockholm to locate and dispatch volunteers trained in CPR to nearby OHCA.

Communicating with users based on their location and skill set

“This technology was originally developed for other businesses that had the need to quickly distribute information and work orders to recipients such as service personnel based on their current location. Tweaking the software into a lifesaving system was well worth the effort” says Tomas Stark, responsible for product development at LEKAB Communication Systems. (www.lekab.com)

A cell phone service using Mobile Positioning System (MPS) called Mobile Life Saver (MLS) was developed and volunteers trained in CPR were recruited and connected to it. The volunteers simply enter their information via a webpage and after leaving their consent their cell phones can be positioned. MLS is activated via the dispatch center simultaneously with ambulance dispatch on suspicion of an OHCA. 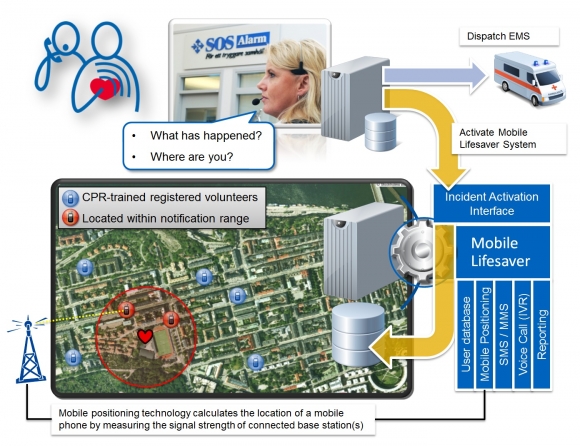 The software applies incident-specific rules before the message is sent out to any recipients. By mapping each specific incident to a competence filter and search radius, the system will ensure that only a subset of all registered users receives the message. The result is that the actual recipients are known to be capable, committed and geographically available to assist, increasing the overall quality of the communication flow. 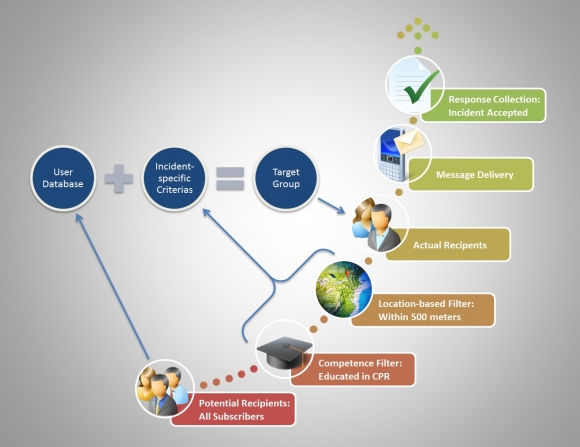 The volunteers are alerted by a computer generated phone call and receive address information via text message, but only if they were positioned within 500 m from the suspected OHCA. The text message also contains a link to the map for users with smart phones. 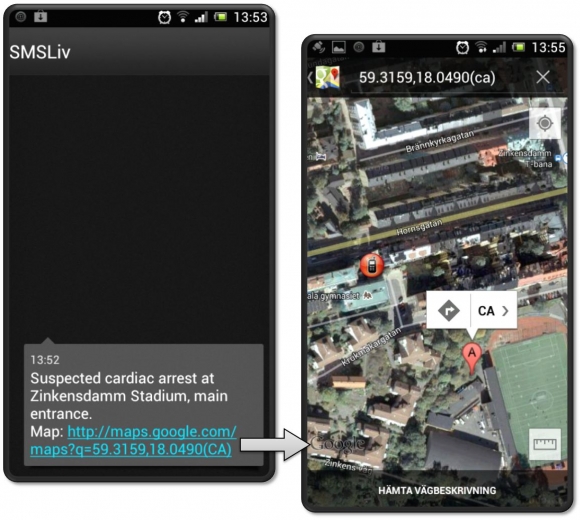 The system has now been running for a little over 2 years and so far over 6800 volunteers has decided to join in. We´ve had some ads in the newspapers but word of mouth has been the major reason for the success. We´re constantly on twitter and Facebook spreading the word but most important, if you take a course in CPR in Stockholm the instructor tells you about the project and urges you to join in.

Over the first 82 weeks the dispatch center in 303 cases of suspected OHCA triggered the system. 109 of these 303 cases were later determined as OHCA where resuscitation (i.e. CPR) was attempted. In 44 percent (n = 48) of these 109 cases one or more of our volunteers were on scene prior to ambulance and in 42 percent of these cases (n=20) they also performed CPR. (EMS/Fire-fighters or police were on scene performing CPR in the other cases)

Early CPR saves lives, that’s known and this clearly shows that the system we´ve developed could be used to recruit volunteers as an early resource of potential lifesaving actions.

It´s great to see that people are willing to participate, we get emails and calls every week from volunteers that give us feedback after an alarm and it´s cool to see not just nurses and physicians as you may think. It´s network engineers, stockbrokers, teachers and students that all joined in because they want to use their CPR skills to save someone else’s life.

Strengthened by the success of the first 303 cases we´re now conducting a large evaluation of the results. This project is part of a doctoral thesis and we´re planning a total of 1800 OHCA in the final analysis. We hope to be able to show that this system is a way to increase bystander CPR and by doing that we hope to increase survival after sudden cardiac arrest

With no fancy apps so far this MPS/MLS system might seem like a relatively low-tech solution. But since it was developed to use the GSM system to locate users there are no requirements on the user’s cell phones. Anyone regardless if they are using the latest state-of-the art smartphone or an older plain cell phone can be positioned.

“We want their skills, not their phones! I like the fact that my mom, a retired nurse after some 25 years at ICU can join in, she is not using a smartphone but she sure can do CPR” says David Fredman.

However this system integrated with smartphone applications would provide the users and us with additional features as well as faster more accurate positioning. We have plans on developing an app that’s using GPS positioning and where we also can launch retraining or a quick refresher of CPR in the phone. By doing this we would keep the volunteers alert and at the same time we get faster and more accurate positioning.

David Fredman is a RN (registered nurse) but for the past three to four years, he’s been working as a project manager at Södersjukhuset hospital, Stockholm, Sweden.  At the hospital, he’s part of a research group focused on improving survival after cardiac arrest. This Mobile Life Saver project has been his main focus but now he is also involved in a start up of a National AED (Automated External Defibrillator) registry where we hope to incorporate this technology to dispatch not only volunteers but also AEDs.