There are few items found in an operating room more commonplace than surgical suture, but a new innovation from one of the most innovative inventor in digital medicine is set to change that forever.

John Rogers, professor of materials science and engineering at the University of Illinois at Urbana-Champaign, has found a way to apply his revolutionary flexible sensor technology to sutures and enable them to both precisely measure temperature in real-time.

A rising temperature is a sign of possible infection so these “smart” sutures can potentially warn of early infection. They can also deliver heat to the wound site, which is known to aid healing. The long term vision, according to Rogers, is to ultimately enable the sutures to deliver drugs directly to the wound in a programmed way.

The flexible sensors used to coat the sutures is developed by using chemicals to slice off an ultra thin film of silicon from a silicon wafer, which are then transferred to polymer or silk strips using a rubber stamp. Finally, they deposit metal electrodes and wires on top and encapsulate the entire device in an epoxy coating.

They have managed to build two types of temperature sensors on the sutures. One is a silicon diode that shifts its current output with temperature; the other, a platinum nanomembrane resistor, changes its resistance with temperature. The micro-heaters used to deliver heat to the wound are made using gold filaments that heat up when current passes through them.

All materials used to make the sutures are safe for use in the body. Rogers’ team has tested the mechanical flexibility and toughness of the sutures on incisions in rat skin, but they have not yet tested the temperature sensing and heating capabilities in humans.

I first wrote about Rogers last summer when he unveiled his invention of a flexible tattoo-like biosensor, which utilizes the same negative force used by geckos to cling to walls to attach to an individual’s skin and capture vital signs such as EEG, all the while transmitting that data wirelessly to a paired device. As if that wasn’t enough, the sensors are also totally solar powered, meaning they do not require any power source other than natural light and will operate as long as the users chooses not to remove them. 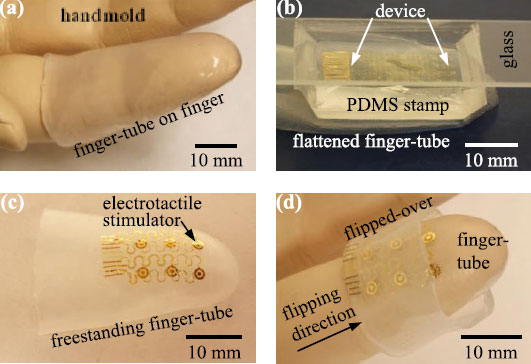 Rogers also recently unveiled a design for electronic surgical gloves with sensors embedded in the fingertips. The idea is that one day surgeons will be able to use their fingers to identify tissue and be able to immediately ablate it without reaching for another instrument.

Rogers co-founded mc10 to commercialize the technology developed out of his research. The startup was recently awarded a contract from the US Army Natick Soldier Research, Development and Engineering Center (NSRDEC) to develop solar cells that are directly integrated into the fabric cover of combat helmets and rucksacks with the goal to provide the dismounted soldier with a discrete, renewable power source.

Basically, Rogers (with the support of his team of research scientists of course) is almost singlehandedly leading the revolution in micro-electronics and before long the products developed by his company could well be embedded in and around everything, including our bodies.

The research leading to the development of the “smart sutures” was published in the journal Small under the title Thin, Flexible Sensors and Actuators as ‘Instrumented’ Surgical Sutures for Targeted Wound Monitoring and Therapy.