Saving burn lives, there is an app for that

[This is a preview of some of the exciting mHealth research being presented at the upcoming Medicine 2.0 Congress in September. This abstract and others are candidates for the iMedicalApps-Medicine 2.0 mHealth Research Award]

At 8:00 AM you see a small, wizened man, in his late sixties. He holds a bloody handkerchief across his head and requires suturing of his laceration.

Following this, you drain a collapsed lung and treat a man with an electrical injury who drilled into a power line. Sitting on one of the benches in the waiting room is an old lady in a tattered black coat. She holds a shopping bag complaining of a head-ache.

Such is how a routine day might begin for an emergency room chief resident. The next few hours merge indistinguishably into one another until you see ambulances pulling up outside. Suddenly, an anxious nurse announces that a gas line has exploded; you are told to expect at least 50 casualties, many with severe burns.

In a perfect world each patient would have their treatment painstakingly prescribed by a highly trained professional. However, where there are large numbers of casualties there is a paucity of trained staff and resources. The problem is further compounded in that the first eight hours post burns are critical in determining patient outcome. These two factors are in direct conflict.

A similar scenario led us to develop our burn app.

Recently, we were asked to help out following a series of catastrophic fires in Kenya. On the outskirts of Nairobi at 7:30 pm a tanker truck filled with approximately 42,000 L of petrol overturned on the highway. The thought of free gasoline was too much for some people to resist. Women with children strapped to their back clambered over the vehicle before a cigarette triggered an explosion. Over 100 people died immediately and survivors were treated at the scene. The hospital fared no better, our team finding staff lacked sufficient training to handle the situation.

Moreover inadequate treatment during the first 8 hours resulted in wards of children, septic and in kidney failure, their fate sealed (see pictures). The urgency in developing this app came from our knowledge that events similar to the Kenyan experience are not uncommon, are likely to happen again in the future, and we needed to be better prepared. 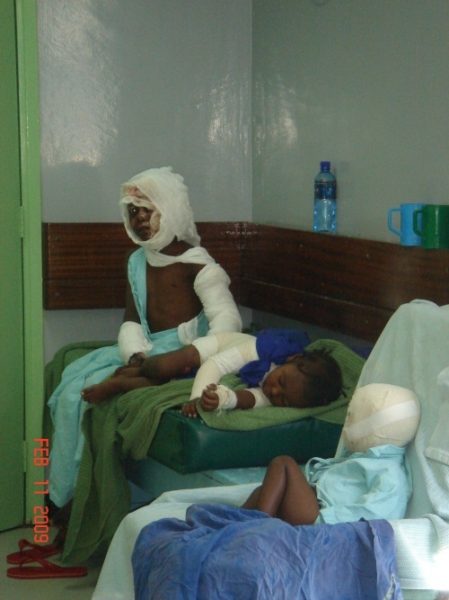 To build an app that could train the layperson in a matter of minutes to treat a victim of severe burns for the first 8 hours post injury.

The next step of the design process was to determine how to apply technology in ways that would enhance learning. One widely accepted model of cognition suggests that information enters working memory (the area in the brain where content is thought to be integrated with other incoming information and with prior knowledge) through two channels, one visual and the other verbal.

As displayed in this diagram, the size of each component in the model is limited; the consequences of these restrictions are significant and include:

These conclusions were used to build a scaffold upon which the Burn App was created. For example, when describing a surgical procedure, video is an ideal method of delivery.

However, still imagery enhanced with text descriptions was preferable for the presentation of case studies because still images required the student to more fully analyze the patient’s condition.

Results of a study that we recently completed indicate that the App was able to train first year medical students (those who had never had any instruction in burn care) as measured by their response to a series of questions designed to assess a deep understanding of patient care for the first hours after injury.

Dr. Goldberg is Assistant Dean at the School of Medicine, Director of Academic Computing and faculty member, Department of Biomedical Engineering at Johns Hopkins University School of Medicine. Dr. Goldberg’s research interests center on the development of virtual learning systems to enhance science and medical education.

Dr. Milner is Professor of Plastic Surgery and Chief of the Division of Burns at Johns Hopkins University School of Medicine. He also serves as Surgical Director of the Johns Hopkins Wound Healing Center, Director of the Michael D Hendrix Burn Research Center and is Honorary Civilian Consultant Advisor to the British Army in Plastic Surgery and Burns.