Qualcomm Life Inc. recently announced the availability of its new 2net(TM) App Software Development Kit (SDK) on the Qualcomm developer network, also known as QDevNet. QDevNet is geared toward giving developers the tools and resources needed to create mobile experiences and bring them to market.

The software is available to developers on multiple operating systems such as Android, iOS and Microsoft platforms through 2Net Connect Application Programming Interfaces (APIs).

These APIs are intended to be used as an interface by software components to communicate with each other, and thus allow developers to create a myriad of consumer medical apps.
Rick Valencia, vice president and general manager of Qualcomm Life explains.

“The health and wellness market is ripe for engaging mobile applications that make self-care fun, and actually motivate positive health behavior change. We have a group of 2net Ecosystem collaborators that are as eager as we are to encourage development of innovative apps that will add value to their existing devices and data, and will ultimately empower consumers to better manage their own care.” 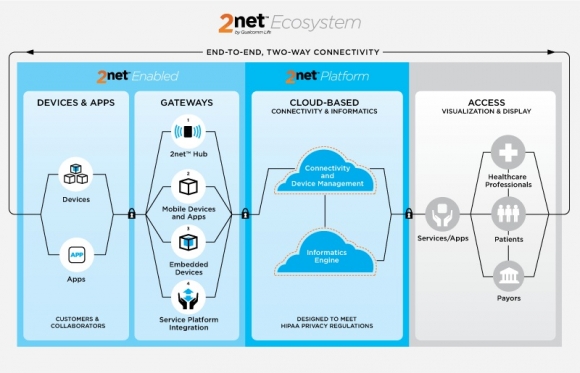 The iMedicalapps  team has previously discussed Qualcomm’s 2Net platform, and a refresher on the intricacies of how it works can be found here.

Some of the partners that Qualcomm is tapping into to develop useful apps based on biometric data attained through mobile phones includes:

Along with this announcement came the announcement of the 2net App Developer Challenge to identify the best 2net-enabled applications.

“Submissions will be accepted from September 1, 2012 – October 1, 2012. Cash and other prizes will be awarded for first, second and third place winners, including: $20,000, $10,000 and $5,000, respectively. Winners will be announced at the 3rd Annual Wireless Health Conference, hosted by the Wireless-Life Sciences Alliance (WLSA), on October 23 in San Diego, California. The first place winner will be invited to join Qualcomm Life at its mHealth Pavilion where the winning app will be showcased.”

To find out more about the contest, check out the developer website, as more information will be forthcoming.