Physician review of the Nexus 7 Google tablet, fits comfortably in your white coat

Even though iMedicalApps was founded on exclusively doing iOS reviews, we have been device agnostic for the last few years. We do reviews of Android and even Blackberry medical apps.

Although the majority of medical professionals use iOS devices, we’ve always kept an open mind to other platforms, even penning an editorial last year with the provoking title: “Why locked Android tablets will beat the iPad for Hospital use”.

When the Nexus 7 tablet was launched recently to much fanfare, we thought the Google tablet deserved a close look from a medical perspective.

My review of the Nexus 7 started with low expectations. Other than the great price point ($200 – $250), I didn’t know what the big fuss was about. A tablet smaller than the iPad, with a lower pixel display (albeit barely), and with a significant smaller app ecosystem.

So obviously, I’m not going to recommend this tablet to medical professionals right?

This review will be Physician centric, focusing on the hardware, form factor, price, and medical app ecosystem.

Last year I penned a piece on why Physicians love Apple Hardware. It has a “medical grade” feel to it, something other hardware manufactures have rarely been able to emulate. Although the Nexus 7 doesn’t feel “medical grade”, like the iPad — it does feel significantly better than the any other Android Tablet I’ve tried. It doesn’t feel cheap or plasticy in your hands.

Although it doesn’t have the same pixel density as the iPad, the Nexus display is more than sufficient for reading medical literature and textbooks. The display is surprisingly beautiful compared to other Android tablets.

Most medical professionals know that Android’s app ecosystem is not on par with iOS. That said, most of the essential medical apps are there. For medical reference and prescription drug reference — Medscape, Epocrates and Micromedex. For cloud storage, Evernote and Dropbox. For PDF management — ezPDF Reader — although there is definitely a dearth of PDF management apps, unlike the iOS  ecosystem.

Initially, one of the most disheartening and lacking apps for the Nexus 7 was Citrix. I use Citrix on my iPad to access patient medical records, and although you can download the app on the Nexus 7, it had not been optimized for tablet form.  This resulted in a sloppy user experience, and the inability to properly look up patient records, even when trying to use a stylus pen.  Luckily, Citrix just updated their app for the tablet form factor — although for many EMRs the smaller screen of the Nexus 7 still isn’t workable.

Apps that are merely “scaled up” is a trend you see with many of the apps you download for the Nexus 7. Most of them have been scaled up to fit on the Nexus screen, but not optimized for the form factor.

Simply put, Jelly Bean is fun. The OS runs smoothly on the Nexus 7 without hiccups.  From the initial screen shot of this review you can see that Jelly Bean allows you to customize your home screen a significant amount. Much of this is in the form of extremely useful widgets you can place on your home screen — a feature I’m shocked iOS hasn’t incorporated.

Also useful is Google Now, a feature that isn’t Siri-esque, but just as interesting and definitely more useful. I rarely use Siri on my iPhone 4s, and Google’s Now ability to have customizable cards is innovative. It can get kind of creepy though. For example, when you wake up in the morning, it can find out when you’re going to work and will tell you the best way to get to work — without any prompting on your end.  The best way to see it in action is by looking at Google’s explanation: Google.com/landing/now

Overall, it’s clear Android has matured significantly from it’s v2.0 days, and is definitely on par with iOS in its current iteration.

So far in this review I’ve mentioned how the Nexus 7 has good hardware, a subpar app ecosystem, and great OS. Nothing spectacular, until you consider form factor and price. These two are the game changers for medical professionals.

The iPad’s form factor leaves much to be desired when using the tablet in the medical setting. First, you have to get a custom white coat that fits the iPad. Once you’re finally able to fit your iPad in your white coat, you feel like someone took a brick and put it in your white coat. I have physician peers who have gone as far as weighing down the other side of their white coat so they can balance themselves. 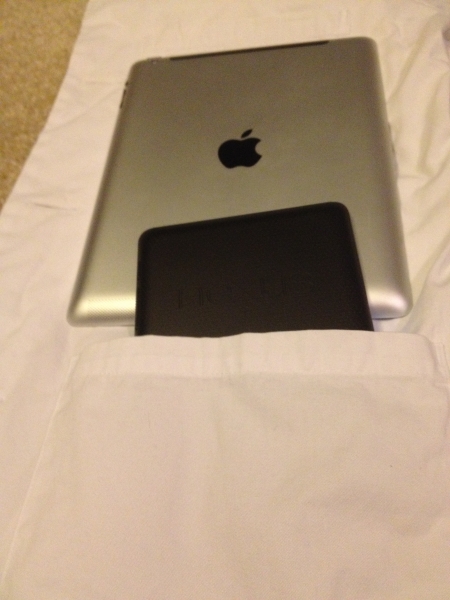 The iPad weights 1.4 pounds, while the Nexus weights almost half — .74 pounds.  You would think 1.4 pounds verse .74 wouldn’t be much of a difference, but ask a resident or a Hospitalist that uses their iPad for a full day of rounds and you’ll get a similar response.

The Nexus 7 fits a white coat without any issues as the below picture shows: 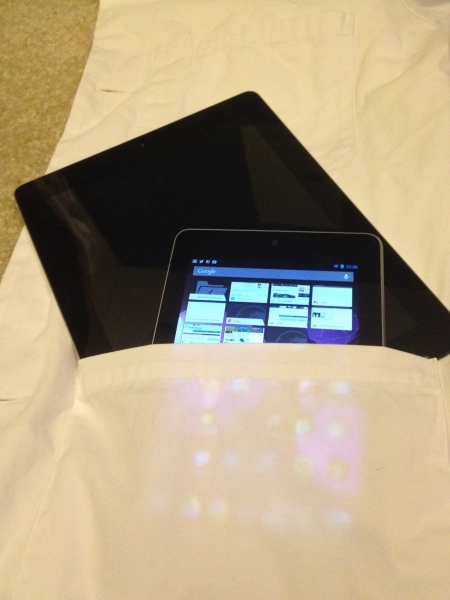 I can even fit the Nexus 7 in my Emergency Room scrub pant pockets when I’m not wearing my white coat.

For medical students and residents, making a tablet investment is difficult. Medical students are already looking at hundreds of thousands of dollars of debt, and making an iPad purchase on loan funds will probably equate to a real value purchase of twice the price by the time their loan is paid off. Resident Physicians are finally getting paid, but just above minimum wage, and in some cases, less than minimum wage.  For many residents, an iPad purchase is almost a week’s pay.

After having the Nexus 7 for the past month, I am shocked to say I use it more than my iPad in the hospital. This is mainly because I use my iPad for looking up reference data and use the Evernote app on a daily basis to organize and learn medical literature while at the hospital.

But if I had the choice, would I get an iPad or Nexus 7?

I would definitely get the iPad. I still use my iPad more than the Nexus 7 outside of the hospital for medical purposes. The iPad has great medical reference apps such as Radiology 2.0 and robust PDF management apps that are not rivaled by the Nexus or Google’s app ecosystem.

But when I’m at the hospital, the portability of the Nexus 7 can’t be beat. This doesn’t mean the iPad can’t be used in the hospital setting or most physicians would rather use the Nexus 7 — your workflow will determine this. If you use patient education apps or medical reference apps not available for the Nexus 7, then obviously you would still choose the iPad.

One of the biggest conclusions of this review is the need for a smaller tablet form factor for physicians.