According to the company this new program will “improve communications between practitioners and their patients, patient engagement and adherence, and ultimately patients’ health.”

Their claims are quite bold and will deserve ongoing research and assessment in order to assess if they can live up to their self-prescribed hype.

How does mRx work?

mRx is an app for an Apple or Android smartphone or tablet. The app provides a catalog of mHealth apps from which the provider can choose.  There is also an electronic prescription form that providers can fill out that will send an email with a link to patients.  From there, patients can click on the link and download the relevant app.

mRx keeps track of what has been prescribed to each patient. It does not appear to offer a patient interface which could allow patients to see what apps they have received from different doctors for instance. The focus, then, is on being provider friendly and not patient friendly to date.

Who is the pilot for?

The pilot program is focused on certain fields. This will be the initial test ground for what mRx can and cannot do. The fields of choice are cardiology, rheumatology, endocrinology, orthopedics, physical therapy, and fitness training. However, the company welcomes the participation of people in other fields.

How were apps selected?

A key concern for app developers and providers should be how apps are selected for the mRx pilot. The apps for mRx were selected by specialists in the aforementioned fields. Each specialist created a sample list of apps that providers can select from, but providers can also select other apps of interest. 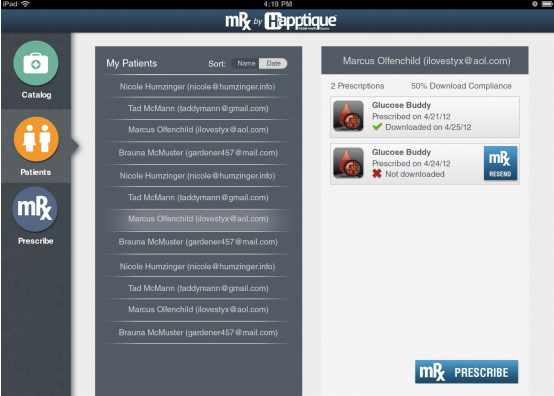 The criteria for selecting the apps was not provided in the company’s announcement of the pilot. In fact, specialists seem to have simply selected apps they like based on the information provided by the company. The company should ideally provide this information in the future so that their approach can guide innovation in this area by other companies or governments.

Goals of the pilot?

However, the company does provide a form that providers must fill out in order to participate in the pilot. The form requires basic biographical information and some information about what devices the provider is using.

If the tool is user friendly and actually improves the workflow of the provider, clinicians will hopefully prescribe apps to patients using the tool.

The second goal will be getting patients to actually use the apps. Happtique appears to think that provider recommendations will lead to use which will be the case for some patients, but others – especially those who are not tech savvy – may have a hard time understanding why and how to use apps instead of simply taking whatever treatment has been prescribed to them.

Also, given the diverse group of providers that may be involved, the prescription model may not be accepted or useful as a model for recommendations to a patient (or for personal trainers – a client). In addition, for providers concerned with malpractice, the lack of evidence for certain apps may override their desire to use the mRx tool for prescribing apps. For example, to date, no national clinical guidelines recommend the use of apps.

Another goal of the pilot is to assess the usability of mRx. The company states that it will also assess practitioner and patient satisfaction. No methods are provided for achieving either of these goals. One of the potentially useful and easy goals of the pilot is to track what is being prescribed and whether patients actually “fill” the prescription.

Given the low cost of most apps, one would think that patients would purchase them readily. Based on the company’s announcement, patients and providers will need an iPhone, Android, or tablet in order to participate.

However, barriers exist – such as whether patients have the correct hardware for the apps. Unfortunately, the company will not measure actual use of the app by patients which would help it figure out if patients are actually adhering to the apps (one of the overriding goals stated in the announcement).

Moreover, they will not assess any clinical outcomes associated with the use of the app. This is understandable given the great costs that would be associated with doing this, yet some subjective assessment (perhaps via a survey) of whether providers think the apps are impacting outcomes would be useful. Some information regarding the physician and patient demographics would also be useful for determining who is likely to use this tool. The company does not state whether it plans to publish any findings from the pilot in peer-reviewed journals where they can be exposed to high level critique from the very providers they seek to have as their customers.

As with all early efforts of this type, there are numerous challenges to attempting to “scale up” this initiative moving forward. One challenge will be incorporating the technology into different types of mobile devices and also incorporating the technology into the various existing electronic prescribing systems that some health centers use. Another may be the amount of training that some apps take before they are useful to patients.

Despite future challenges, the pilot program is a great first start and should provide some useful data for developers of apps, governments, and patients.

iMedicalApps will keep track of the results of this pilot and report on them as soon as they are publicly available.