Converting between various opioids can be a frustrating task for clinicians.

eOpioid, from developer SentientWare, offers the ability to perform conversions on the iOS, for a variety of analgesics.

Designed to aid healthcare professionals with calculations of dosing for opioid medicines, it has received fairly positive reviews online and is available through iTunes for the iPod Touch, iPad and iPhone.

eOpioid purports to set itself apart from many traditional opioid conversion apps by its ability to perform complicated conversions without relying on just one conversion factor.

Furthermore, it includes Patient Controlled Analgesia device suggested dosing. Users can choose the opioid they would like to convert, from a single page, along with administration route (represented by helpful icons). Then, they may perform the conversion through the app, read the suggested script writing for it, or view (if applicable) the values for PCA devices. 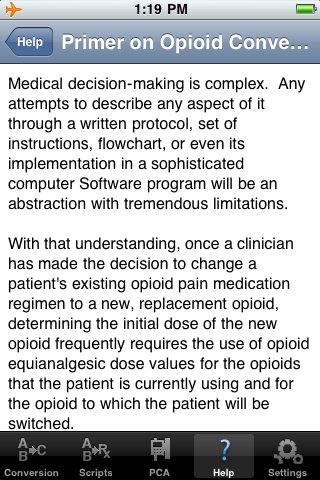 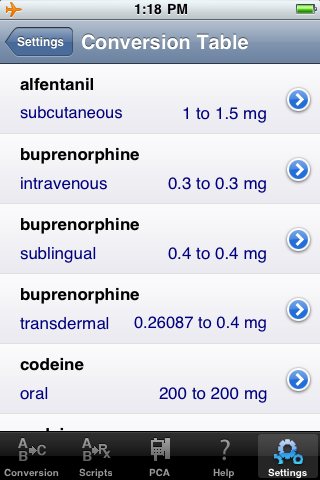 Upon starting eOpioid, users will be greeted with the main Conversion page. Listed at the bottom are links for Scripts, PCA conversions, Help and Settings. Conversion, Scripts, and PCA all feature Edit and Add tabs at the top of the page, from which new medications may be added to be converted. The Scripts page generates suggested prescriptions based on conversions done for outpatient medications. PCA allows for output based on demand dose, lockout interval, and continuous mg/hr. Behind the scenes of eOpioid is a conversion table that may be edited as needed by users.

Fortunately, there is also a Default tab that will reset the eOpioid conversion table to its original values if needed. I was impressed by the amount of options in eOpioid, along with the extensive database of medications.

At first, eOpioid appears fairly daunting. Users definitely need to spend the time to get to know the layout and features of it.

However, after learning the workings of eOpioid, it is a fairly powerful app with a lot great features. Its ability to give output values in ranges for various opioids is unique and rather useful. The app’s database contains not just the number of milligrams of replacement medications, but also different size of tablets, patches, and so on in a readable output form. Dosing frequency is also included in the app.

Furthermore, reference material used for eOpioid is documented within the app, for those interested. 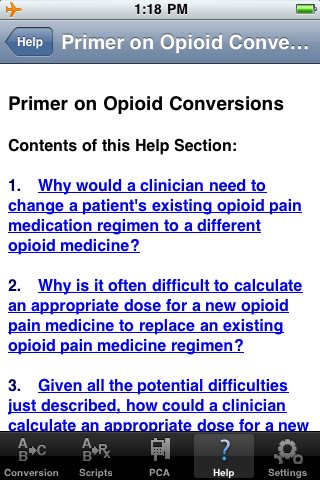 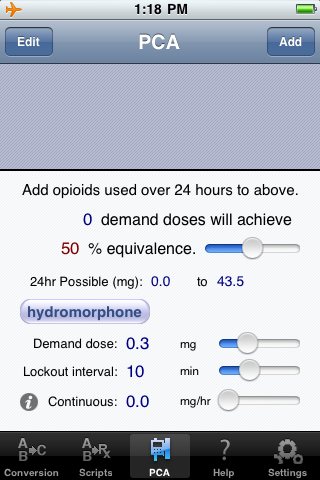 One concern I have with eOpioid is the learning curve required to use it at a functional level in a clinical setting. While many apps include an automated intro tutorial process, eOpioid does not. Rather, there is a fairly detailed guide available in the app under the eOpioid Help tab.

The initial General Help tab mostly contains legal warnings about the usage of the app and further Help tabs are more directed at the various features within eOpioid. While these pages are useful, it is not the most clear-cut way to introduce new users to the functions of eOpioid.

Preferably, an intro video (either online or built-into the app) would be much more helpful for first time eOpioid users. The developer website does contain contact information for the app, as well as a blog discussing upcoming updates (last updated June 2011).

Overall, while some information is present, I feel eOpioid has a fairly steep learning curve and anything the developer could do to lower this entry point would be beneficial. This is not to say that eOpioid is not a useful app, rather, users should expect to spend time learning to use it best through the detailed, written Help guide within the app. 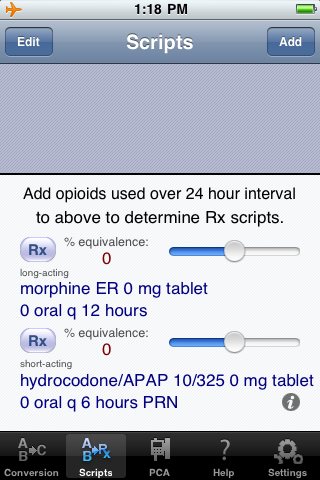