The creative force of Eric Topol

[Dr. Topol will be our guest on our #mHealth tweetchat 9P ET Wed, Aug 8]

By now, our readers must be aware of the landmark medical book Creative Destruction of Medicine, published earlier this year by Eric Topol, MD.

Not that the book deserves much criticism, but I have found only one counterpoint to its major points which I heard live on NPR’s Science Friday from Dr. Arnold Relman, former editor-in-chief of the New England Journal of Medicine, who apparently felt much of the enthusiasm about personalized medicine is “premature”.

However, having read many of the reviews, I felt there was little attention paid to the actual substance of the book. Instead, the reviewers seemed to be mostly drawn by the powerful image of “destruction” and the catchy allusion of technology upending medicine, like it has in many consumer marketplaces.

In this review, I will attempt to explore more fully the major themes in the book

The overarching idea of the book is that advances in genomics and miniaturization of sensors will drive a transition from population into individualized medicine. From the perspective as a founding editor of iMedicalApps and using examples from the book, I will offer my impressions of what I think are its most provocative ideas. 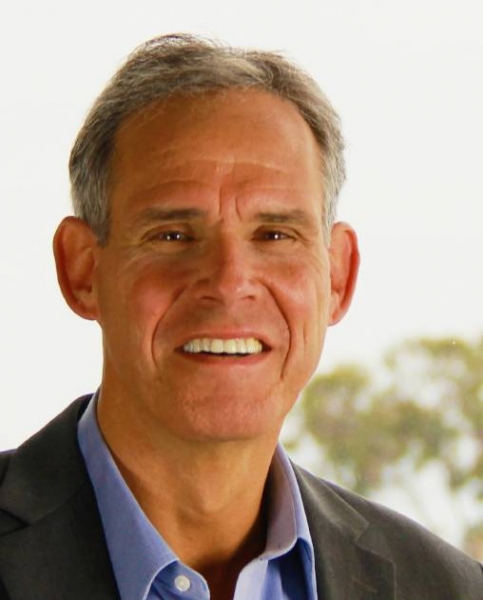 While the Creative Destruction of Medicine has been touted as a visionary guide to medicine’s future, in many ways its real triumph is as a strikingly ambitious survey of the most important & recent advances across the wide swath of medicine. This is split across several chapters, including those covering genomics, physiologic monitoring, anatomic imaging and electronic health records.

It is a real treat to follow Topol’s supple mind as he selects and explains technological and biologic advances from a myriad of medical specialties.

However, it is even more striking to learn where he feels medicine has failed, especially as one of its most decorated academicians. Sometimes the deepest vision is seeing how things really are, rather than how they should be. He spares little sympathy, identifying as points of failure the broken clinical trials paradigm and the stagnant pedagogy of medical schools and the teetering priesthood of physicians.

Though, the object of his greatest derision is one-size-fits-all medicine, which he dubs “population medicine”.

Chapter Two starts off with a bang:

A BUZZWORD IN MEDICINE is “evidence-based.” If something is evidence-based, then it has some kind of sanctified quality and must be good for patients. But what this represents is really population medicine, the antithesis of medicine directed at and for an individual.

It is hard to dispute that in the last few years the declaration of an intervention as “evidence based” trumps all in a medical argument. So, one takes notice when the launch point of the book is disputing this most pervasive of medical habits.

Yet, while this is at least partially a straw man argument (exactly who is “for” one size fits all medicine?), he does make a convincing argument how the forces of academia and of the pharmaceutical business align to force as many patients as possible into defined categories and uniform dosing.

The large scale clinical trials with which drug based therapies are proven depend on uniformity – this helps researchers keep their data clean but also simultaneously helps pharma simplify its marketing into a single dose for every patient.

In the book, the poster child for this type of lazy medicine is the broad use anti hyper-cholesterol medication, with Lipitor (atorvastatin) – the most widely prescribed medicine. As this is squarely in his academic cubbyhole, it is hard to argue with the studies he cites, but he is essentially claiming that the benefits of daily Lipitor use only accrue to 2 out of 100 patients who take it. As only a tiny percentage of those “without prior heart disease at risk for developing such a condition will actually benefit … it therefore seems that the predominant benefit is cosmetic, normalizing an out-of-range blood test”. He names this as “mass medicalization”, and proceeds to add the

This is a big and important claim, and from the impassioned language he uses, one would feel we as physicians are bordering on mass negligence by using consistent dosing on a regular basis. But, if there are moments of mild discomfort like this, those are quickly offset by his evident pride in being a physician and by the pleasure he shows after sharing some great new innovation.

This is where he wants medicine to go (from Chapter 2):

“We need real evidence based on individuals not populations. Fortunately, our ability to get just that information is rapidly emerging, beginning an era characterized by the right drug, the right dose, and the right screen for the right patients, with the right doctor, at the right cost.”

And the way we are going to get there is fundamentally by application of individual genomics, as he explains in Chapter 5.

In terms of sharing important medical breakthroughs, the greatest strength of the book , not surprising given Dr. Topol’s background, is its genomics section. Perhaps not coincidentally, this is also where some of the most opaque text was found. For example, some of the information on controversies around the efficacy of genome wide association studies (GWAS) is largely impenetrable for the average physician (at least this one).

Even then, his excitement in retelling the landmark study using GWAS to find the genetic underpinning of age related macular degeneration is infectious:

The first GWAS was published in April 2005. That study was investigating age-related macular degeneration (AMD), the most common cause of blindness, which affects more than seven million Americans. The researchers examined 116,204 SNP tags in the haplotypes of ninety-six patients who had AMD and fifty suitable controls who were not affected. …Sequencing this bin of the genome pinpointed the variation in an exon—a simple change coding for the amino acid histidine instead of tyrosine – as a root cause of disease…It was a stunning success for genomic science

Topol goes on to share the amazing story of a young child named Volker in Wiscosin who was dying of a mysterious GI ailment when, in desperation, the physicians ordered a genome sequence and actually identified the mutation that caused it. The kid is now five years old and healthy.

The Volker case was groundbreaking, and for the first time, it is possible to imagine a future medicine that has no use for the terms “idiopathic” or “cryptogenic”

But, the early excitement that the genes underlying the most common, debilitating diseases would soon be unravelled turned out to be premature.

However, after describing the truly astounding rate at which genomic sequencing has increased in speed and decreased in price, he quickly dashes the hopes that sequencing by itself will lead to quick understanding of the most common and troublesome chronic diseases that afflict more than 75% of the US population .

Among possible reasons is that it turns out that the majority of our DNA does not code for proteins but is regulatory, with perhaps more than “100,000 ‘RNA-only’ genes.” As he puts it

but GWAS has typically only explained about 10 percent of the story. The unexplained 90 percent has become known as “missing heritability” or, borrowing a term from cosmology, the “dark matter” of the genome.

However, all is not lost as it turns out that marked variability of human response to medications often turns out to have discrete genetic underpinnings. Perhaps this reflects that, evolutionary speaking, drugs have only existed for an instant.

Finding key gene variants that influence the response to a medication can be likened to hitting the side of a barn – an easy target.

And thus the important field of pharmacogenomics is born, which is where the most important locus of individualized medicine resides at this time. 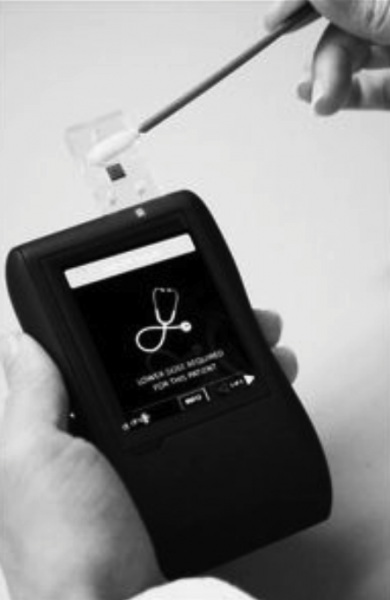 The the two main clinical examples used to demonstrate the real potential for using genomics to individualize drug therapy are quite compelling. The first is the finding that certain patients are resistant to the anti-platelet activity of clopidogrel (Plavix), a non-trivial issue for those who are relying on the the drug to avoid clotting of a coronary stent.

In particular, “the risk of the stent clotting was increased threefold if the patient carried a loss-of-function variant of CYP2C19.” Given the stakes, this is a potentially easy argument in favor of testing individuals for this allele before starting treatment. And in fact miniaturization of sequencing technology coupled with a very specific target means that handheld testing apparatus (see image) can soon test patients of this drug resistance using a small saliva sample.

The other example offered is for glucophage (Metformin). Here, he quotes data that “up to 30%” of patients can be genomically predicted to be resistant to the drug. Perhaps this is why, he states, this is why we often see patients on multiple oral hypoglycemics. When the first drug fails to control the sugar, a second one is added. This would imply a huge opportunity to “personalize” medical care for large and important patient population

The potential in cancer is even more profound:-“cancer is a genomic disease. It can’t develop without a change in the DNA sequence of the cancer cell genome “. While the benefits of understanding tumor genetics have been predicted for so long that it started to feel like hype unequal to the promise, the advances in therapeutics over the last five years should have put that to rest.

In particular, he makes the not entirely original but sweeping point that cancer will be shortly considered to be an amalgam of disordered regulatory pathways, rather than classified by the anatomic origins of the cancer cells (e.g. skin vs lung vs blood).

The most recent example of this is the breathtaking response of widely metastatic melanoma sometimes seen to BRAF mutation inhibitors – a disease previously immune to even the most toxic cytotoxic and immunotherapies. Even more exciting is that the same BRAF pathway aberrations are beginning to be seen across different cancers:

By determining the importance of many of these protein kinase genes (such as epidermal growth factor recepter-EGFR, KRAS, and BRAF in particular tumors), there have been some striking advances in cancer therapy…We are learning that the same driver mutation can be found in a diverse set of cancers, such as BRAF in not only melanoma but also colon cancer and thyroid cancer.

As if to provide an exclamation point, the New York Times recently reported on a landmark Nature paper on colon cancer genomics that shows that the aberrant pathways seen in colon cancer overlap greatly with those that have been seen in other cancers. One of the leading experts & author added “I don’t want to minimize the singular importance of this paper. It is transformative.”

Given the extremely high stakes for patients with cancer and the high cost of its treatment, it seems safe to predict that the place where individualized, genomically based treatment will first take root is cancer.