The 25 million individuals in the US suffering from diabetes often have to endure many hardships caused by everyday activities which most of us take for granted.

One such activity is simply walking, which can exacerbate the pain and damage caused by foot ulcers caused by the combination of nerve damage and poor blood circulation typical among diabetics and also known as diabetic peripheral neuropathy. Treating slow to heal foot ulcers can cost up to $8,000, and if it gets infected that cost can rise to $17,000.

On top of the cost in dollars, diabetics who do a poor job of caring for ulcers once they occur also often times pay with the loss of a toe, or even their entire foot, with 80,000 such amputations taking place annually.

Fortunately, there are startups developing new technology which should help those diabetics living with painful, slow-healing foot ulcers, better manage their condition and live a higher quality life. One very exciting company using body sensor network technology to solve this very problem is Orpyx (@orpyx), a Canadian startup founded by Dr. Breanne Everett which is developing two distinct, yet quite comprehensive systems for keeping the user fully aware of the current condition of their foot ulcers. 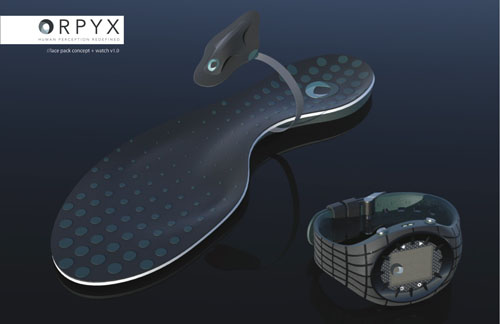 The first, SurroSense Rx, consists of eight force sensors embedded within the insole to capture raw force data, which is then analyzed, converted into a risk profile and transmitted to the wristband display using the low-power ANT+ protocol.

This enables the user to actively monitor the risk of doing permanent damage to his/her feet throughout the day, and the data can also be displayed on a variety of ANT+ ready devices, such as mobile phones and tablets. To conserve battery power the risk profile data is updated every 30 seconds, which enables the system to operate on a single coin cell battery for over six months.

The second, SurroGait Rx, consists of a pressure-sensing insole which tells the user when damage is being done to the feet and provides a substitute sensor for “numb” feet. The device includes a back display, which takes data generated by the foot sensor wirelessly and it transposes the sensation so it can be felt in the back because users typically cannot feel anything through their feet due to numbness.

According to a recent interview with Dr. Everett published by Medgadget, Orpyx is currently developing an iPhone/Android app which would also interoperate with the SurroSense Rx system and will be available when the product is commercially released in late 2012. The plan is to also have a complimentary iPhone/Android app for the SurroGait Rx when that product launches sometime in 2013.

Dr. Everett also indicated that the total cost of the SurroSense Rx system (two insoles and shoe pods, wireless system, wristwatch and app) will be approximately $900, with the insoles needing replacement every 6-18 months for $200 each. When asked about the alert system and why Orpyx chose its particular array of sensors Dr Everett responded by saying:

Our device is not intended to directly capture and relay what a normal foot, rich in Pacinian corpuscles, would capture. Rather, it is intended to provide a simple real-time map of pressure seen on the foot. Its alert function is based on what we know of capillary pressure and tissue perfusion. The device is designed to measure when and for how long capillary pressure has been exceeded at discrete points on the foot (I.e. For how long blood supply to the soft tissues in that area has been compromised). We know that 60% of neuropathic ulcers have pressure as the primary etiologic factor in their development. Certainly, there are other factors that play into this (temperature, shear, peripheral vascular disease to name a few). Over time, we are looking to diversify our products by incorporating other sensing abilities to improve the diagnostic capabilities of the device.

The first video below is an awesome breakdown of the Orpyx products, as well as a phenomenal example of how to engage potential customers and convey the value of a technology in a creative way.

The video below is a campaign launched by the company earlier this year which they are calling “Diabetes Can Knock You Off Your Feet”, to raise awareness about the effects of diabetes and its potential to cause severe injury to the feet.
ADVERTISEMENT
ADVERTISEMENT