LUMOback shows the potential of crowdfunding for health tech startups

Crowdfunding is the new black in the startup community, and with the growth and success of sites such as KickStarter combined with the new JOBS Act recently enacted into law, its reasonable to assume we are only scratching the surface.

Despite this success, there are only a few health tech projects to point to as evidence that crowdfunding is an attractive option for startups in this highly specialized sector.

One is LUMOback (@lumoback), which has emerged in the last couple weeks as the poster child  for health tech crowdfunding by raising more than $100K on Kickstarter, thus validating the promise of crowdfunding for developers of body sensor network technology.

LUMOback won the Body Slam competition hosted by the USC Body Computing Lab last year. They have spent the last eighteen months designing and developing a very cool product addressing back pain, which will affect as much as 80% of the population at some point in their lives, and thus has major market potential.

Back pain has been shown to be directly correlated to poor posture, so its reasonable to conclude that a sensor which grades an individuals posture throughout the day and constantly reminds users to be vigilant about maintaining good posture would be a huge benefit to tens of millions of individuals just in the US alone. 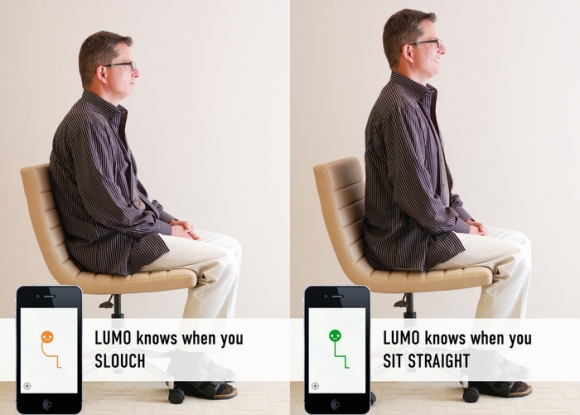 The sensor uses Bluetooth Low-Energy (BLE) technology to transmit the captured posture data to a users’ smartphone or tablet. There, it is visualized using the simple stick figures shown below. Interestingly since it uses BLE,  it is only compatible with the iPhone 4S and new iPad, as these are the only BLE-compatible devices currently on the market.

KickStarter contribution options range from $5 to $10,000, with contributors on the high-end receiving the “distributor package” of 100 LUMOback sensors. 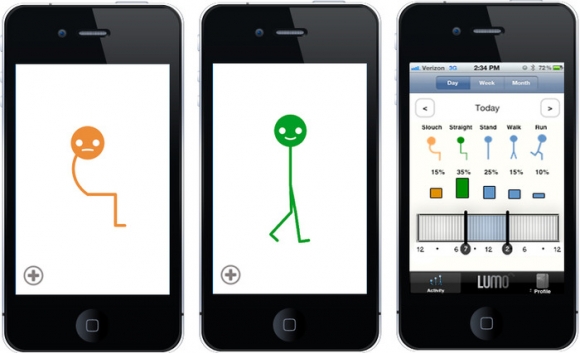 With the success of this project, it will be fascinating to see what other ambitious health startups are we see in the future!