Anatomy Flash Cards app by Lange for iPad and iPhone

Recently, these helpful cards became digitized in the form of an iPad app, appropriately named, Anatomy Flash Cards by Lange.

Over the past few weeks, I’ve had the opportunity to test out this app while on the wards.

First, and most importantly, I’ll comment on the images, as they are the central focus of any anatomy resource. This image set is colorful, simple and crisp. It doesn’t have the most minute detail like the perennial favorite Netter’s, but for those wanting to get an overall picture with moderate detail, these images are wonderful. Sometimes, when anatomy illustrations are so cluttered with labels and pins, the forest gets lost for the trees. Not so with this Lange collection.

So how are these images presented?

The layout of the app starts with a contents screen in which the different images are arranged by body region and then further into individual flashcards. 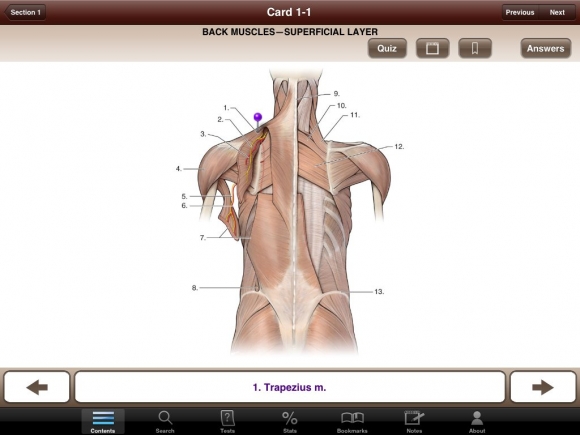 Flipping the card over reveals a list of the names of all the structures in the image. In addition, there is a paragraph or more of information about the image’s structures as well as a “medical relevance” note. 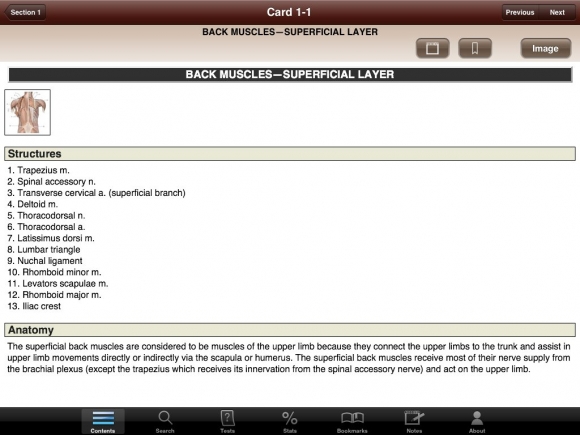 Beyond this basic functionality of image and label, this app packs a lot of additional tools that are quite useful. Each card can be turned into a quiz in which one must identify the correct structure by selecting the corresponding pin. 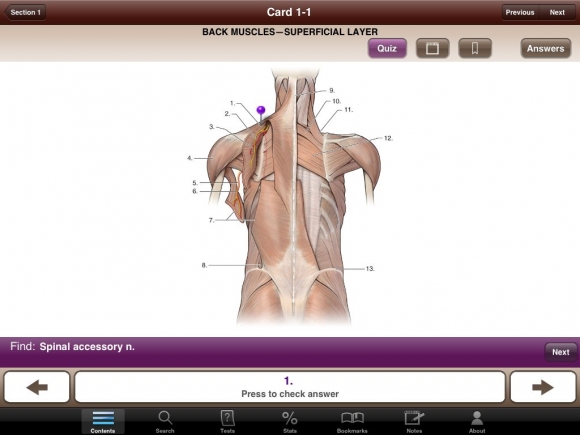 There are also tests, which allow one to compile cards from across the whole app rather than doing one card at a time. This is very useful for studying for comprehensive exams or just retaining what’s been learned. Like any good testing functionality, there are ample statistics that allow users to measure their performance. 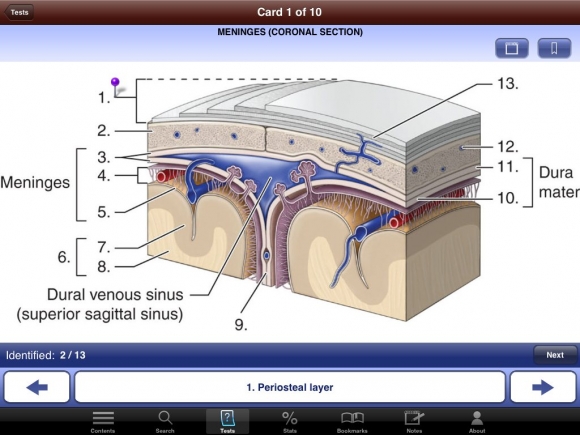 A handy notation function allows for notes to be made on cards throughout the app. The notes are then compiled in one place (“note” tab) so that all can be viewed at once rather than having to fish through cards to get to the notes. Notes can be viewed within cards too. 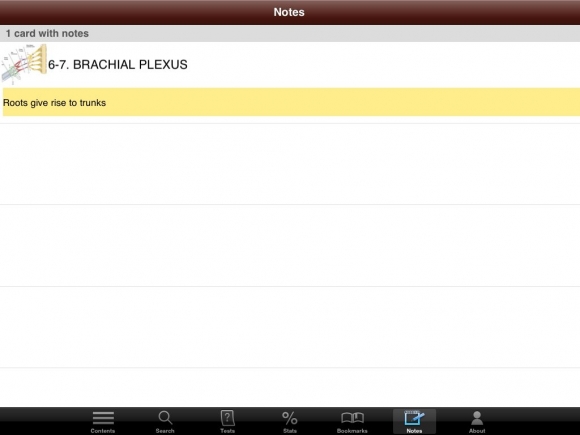 There really isn’t much not to like about this app. The major deficiency for me was that there wasn’t a function to selectively show labels on structures. You can either see them all at a time or one at a time, but nothing in between. Some users may not be bothered by this, but it’s an option I’d like to have.

Additionally, as far as I know, there isn’t the ability to add one’s own pin to structures. That is a feature included in most anatomy apps, and I would have liked to have seen it.

Overall, I think Anatomy Flash Cards by Lange is very well done. I think it will prove to be an exceptional resource for students learning anatomy.