Another talented class of health startups graduates at Rock Health

San Francisco based health tech incubator Rock Health graduated its second class of startups on Wednesday, June 13, 2012 in front of a standing-room only audience at Practice Fusion’s headquarters. The event opened with a tour de force journey through wearable devices, big data, proteomics, and baseball by Dr. Daniel Kraft, the executive Director of FutureMed and chair of the medicine track at Singularity University.

The thirteen Rock Health teams came from an impressive variety of backgrounds, including physicians, a pharmacist, a venture capitalist, and a DreamWorks Animation alum. Most teams were seeking funding, while some announced seed rounds or established revenue streams. Generally we were impressed by the careful thought given to business models and monetization strategies. As noted by the engaging master of ceremonies Geoff Klapp, “Ideas without business models are just projects”.

Here’s what they are up to. 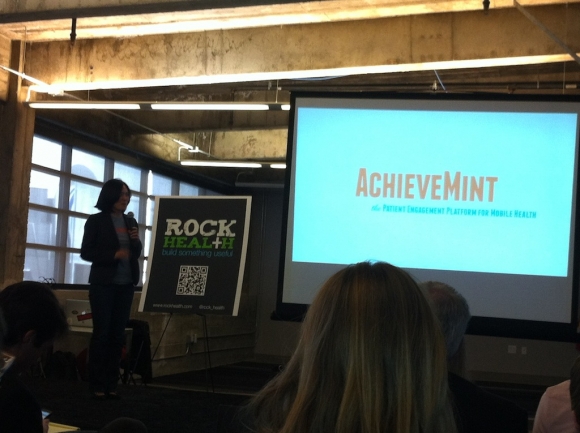 Achievemint co-founder Christine Lemke describes Achievemint as a patient engagement platform. Patient care, she says, will gradually be switching from blockbuster drugs to holistic care, which may include prescribed activities that encourage behavioral changes. Achievemint connects patients using healthcare apps to healthcare companies. Patients can track their progress and earn rewards for taking healthy actions – like checking into the gym, or logging onto fitbit (developers can integrate using their own API or Achievement’s API). Healthcare companies, such as pharma, underwrite use of the service in exchange for direct patient access and a better view of the patient’s behavioral activities. Achievemint announced a partnership with a leading pharmaceutical company, and will book $1 million in revenues in 2012. Achievemint’s additional co-founders are Alessio Signorini and Luca Foschini.

Agile Diagnosis: An indicator of Agile Diagnosis’ early success is a 10,000 strong user base in medical training programs across the country, despite zero marketing. CEO Borna Safabakhsh noted that 50% of patients do not receive the recommended standard of care, and 1 in 7 patients are initially misdiagnosed. Agile does not feel this indicates a shoddy job by doctors, but rather exponential growth and poor dissemination of medical knowledge. Their iPad application simplifies the differential diagnosis and medical workup through a dynamic decision tree well backed up by visible references. Borna noted that the product is currently most useful for trainees, as seasoned providers fly through the decision trees. We look forward to their content becoming evolved enough to offer value to seasoned clinicians, whether standardizing care or assisting in complex decision-making. 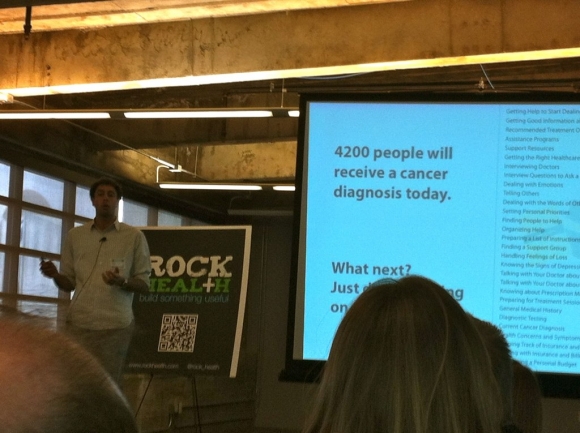 Avva prepares cancer patients to ask the right questions at their doctor’s appointment to ensure they receive the information they need in what is often a high-stress encounter. Co-founder Antoine Sindhu developed Avva after working at Stanford Medical’s Breast Cancer Center. In addition to helping patients manage their clinical care, Avva also recognizes the social, emotional and educational aspects of treatment and recovery. Patients answer a series of questions pertinent to their diagnosis, and are then provided a tailored list of suggested questions relevant to their condition or found useful to similar patients on Avva. Avva hopes to eventually serve as a clinical trial matching service, as a large cost in clinical trials is patient recruitment. The finder’s fee can be as high as $5,000 per patient, with $4 billion a year spent on recruiting oncology patients alone. Avva’s additional co-founder is Aris Theologis.

Cardiio’s Ming-Zer and Yukkee Poh plan to leverage smart algorithms and your computer or SmartPhone’s immense computational power, (they note that its greater than that of the Apollo 11!), to turn their cameras into a biosensor. Already capable of monitoring heart rate accurate within 3 beats per minute by analyzing the light reflected off an individuals face, Cardiio will soon also support other vital parameters. They envision use cases ranging from gaming, to the fitness industry, to telehealth.

Care at Hand was a crowd pleaser, not least because their Chief Medical Officer Andrey Ostrovsky, MD claims a user interface so carefully designed, it takes “only an index finger and third grade reading level to use”. This is key, given the product is targeted for use by home health aides with varying native languages and educational backgrounds. They seek to be the interface between home health and the physician, leveraging the individual in the home for vital data collection in at risk patients. We felt Care at Hand has the potential to finally leverage a previously underutilized member of the care team to improve patient outcomes, if they can figure out how this new information integrates into the wider system’s physician work flow when care needs to be escalated. 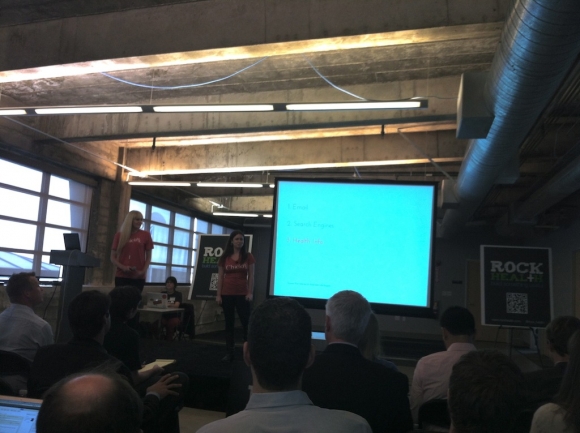 ChickRx is a health and wellness site geared towards women. Co-founders  Stacey Borden and Meghan Muntean report that when searching for health care topics, Google results are “sterile” and results from WebMD can be “dense and confusing”. ChickRx hopes to fill this gap by providing approachable, fun, but clinically relevant information to it’s target audience. Health related questions can be submitted anonymously and users will get answers both from their peers and health care experts on the topic. ChickRx also allows its users to follow topics either privately or publicly. Arianna Huffington of the Huffington Post is already a public fan. The co-founders report that US women spend $70 billion annually on health and wellness products, so their revenue model centers on e-commerce. 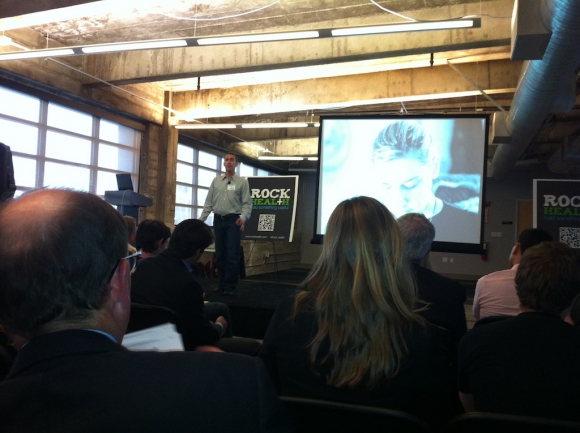 Cognitive Health Innovations (CHI) co-founder Josh Susser described the internet as a “new frontier for mental health care”. CHI allows patients to go online and work through group exercises dealing with their mental health issues. Other members of the group can participate as well, including the mental health therapist. This treatment regimen uses cognitive behavioral therapy, which, according to Susser, gives results quickly, works great in group settings, and is shown to be as effective as “face to face” therapy and medications.  The hosted service is provided free to therapists. They can determine the price and offer it to patients who sign up and pay for the service.  CHI takes a cut and gives the rest back to the therapists. With 300,000 therapists and 10 million clients, Susser says it is a $1.5 billion market. Additional co-founders include Brian Chiko, who serves as CEO, and Ted Gradman. 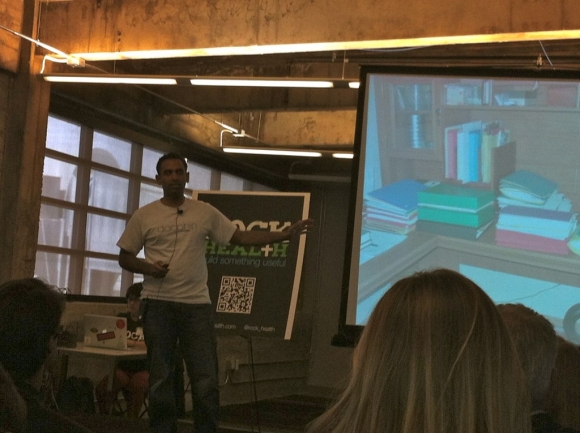 Docphin: Mitesh Patel, co-founder and CEO, describes Docphin as “Kayak meets medical research” to get the right information to the right person at the right time. Docphin essentially aspires to become a medical news and research platform through tailored medical content based upon a providers interests, specialty area, and what is being read by their colleagues. Its single sign-on reduces the significant friction often experienced by physicians trying to access what should be free journals through their institution’s medical library. Several healthcare institutions are already actively using the free product. During the demo Docphin announced the paid version, Docphin Connect, a cloud based SAAS product that allows for more effective communication between the healthcare system and it’s medical providers. Example use cases include the dissemination of vital hospital policy updates or updated antibiograms. It will initially launch at UPenn. Docphin’s other co-founders are Sachin Nanavati, Derek Juang, MD and John Wear. 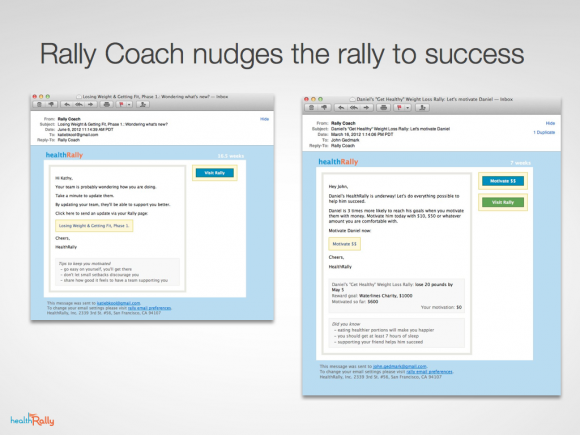 Health Rally CEO Zach Lynch convinced a relative to quit smoking, and then realized he’d stumbled upon a business model for behavior change. HealthRally has built a crowd funded (usually from your immediate social circle) platform combined with an artificial intelligence “Rally Coach” which keeps the social circle and Rally initiator motivated. They have seen a 3-4x increase in success rates for tobacco cessation and weight loss, and so are exploring self insured employer reward matching.  We wonder how the maintenance phase of this product works, (beyond a succession of Rallies) given recent studies that show high relapse rates after financial incentives end.  Perhaps knowing Mom invested in your weight loss is enough of an incentive to keep the pounds off? Other key team members include Peter Kaminski, Michael Coury, and Megan Rechin. 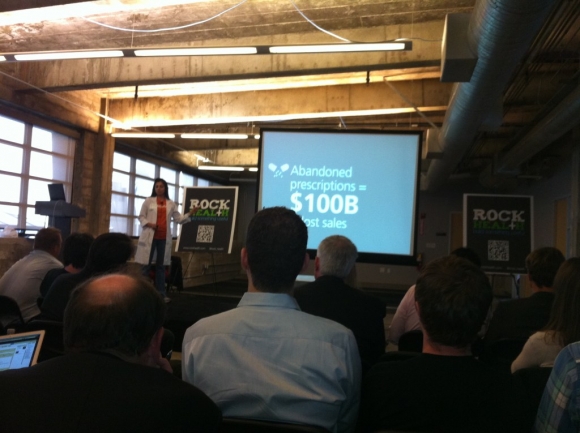 Medmonk co-founder and practicing pharmacist Somaira Punjwani describes Medmonk as a tool to ensure no patients go without their medication just because they can’t afford the co-pay. She states that $100 billion is lost every year from abandoned prescriptions despite a frequent willingness from pharmaceutical companies to subsidize the co-pay to capture the insurance reimbursement. Medmonk allows pharmacists to request discount codes from pharmaceutical companies to help bring down the patient’s out of pocket co-pay. As a result, the companies sell more drugs, pharmacies close more sales, and insurance companies are protected from larger medical claims due to patient non-adherence to vital medications. Punjwani says they have helped over 1000 patients receive discounts, which take on average 40 minutes to obtain. In a period of 10 weeks, over 120 pharmacies have signed up. The only downside is that Medmonk takes an average of 40 minutes between request and receipt of the discount code, so hopefully patients are willing to wait or warn the pharmacist ahead of time. The additional co-founders are Abbas Mehdi and Bryan Li.

Nephosity supports remote collaboration around radiology images through a high resolution, fast, iPad application, annotation functionality, and a cloud server. The product is vendor agnostic and requires only one day to install. CEO Michael Pan sees Nephosity as more of a value-add for established players such as GE and Siemens, rather than a direct competitor. Not bad for an idea that was sparked by Pan’s brother, a radiologist, simply wanting a way to view images on his iPad. Zai Chang is also a co-founder.

Sano Intelligence seeks to be the “API for the bloodstream”. CEO Raj Gokal notes that outside of the hospital, health care providers generally do not have timely lab data when making clinical decisions at the point of care or in tele-health. Sano is a continuous, pain free sensor that sits superficially on the skin, akin to sandpaper. They can already monitor a full chemistry panel, and have a working sensor prototype undergoing testing. Beyond the obvious of glucose monitoring, we hope that research in continuous lab monitoring in the home setting will catch up quickly enough to provide actionable responses to the Sano data and a wider array of use cases. Raj is unworried, believing that products like theirs will spur vast new areas of research and clinical intervention possibilities.  Ashwin Pushpala is also a co-founder. 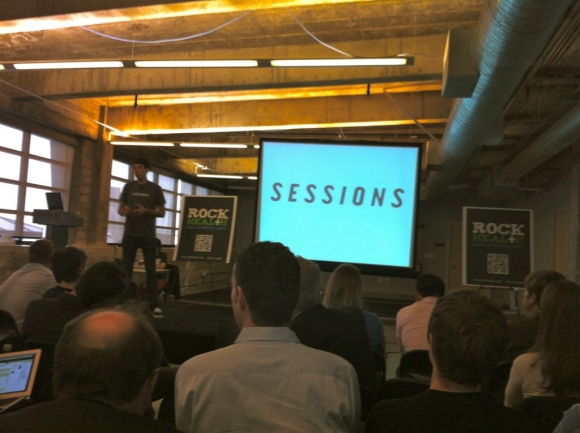 Sessions is an online personal health coach. Co-founder Nick Crocker says that 65% of Americans don’t exercise, at enormous personal and societal cost, and 75 cents of every health care dollar spent treating chronic disease. Sessions connects its users with a coach to collaboratively develop and exercise plan, which is revisited and adjusted every seven days. The coach provides support, including updates by SMS or email, to help maintain motivation. Citing Weight Watcher’s as an example, Crocker believes that behavioral change works at scale. Sessions integrates with popular fitness apps such as fitbit and runkeeper. Their own data has shown that the amount people exercise increases an impressive 34% with the use of their application, with a 96% retention rate. Hundreds of paying customers have signed up, and they are currently working on an self-insured employer pilot with Genentech and research coordination with the Mayo Clinic. Ben Hartney also serves as co-founder.

Rebecca Coelius, MD received her Medical Degree from the University of California – San Francisco. She writes and speaks frequently on emerging opportunities at the intersection of medicine, technology, and policy. Follow her on Twitter @RebeccaCoelius

Rohit Keswani, MD is a physician in private practice with North Atlantic Pain & Rehab www.pain-rehab.com and an angel investor with HealthAngels. Follow him on Twitter at @rkeswani