It should not be a surprise that Physcians are not fans of Microsoft products — namely Windows and Internet Explorer.

Much of this hatred is due to hospital enterprise solutions still using outdated versions of Internet Explorer.

Ask a physician friend to fill you in if you need a better idea.

On a personal note, I had been dreading the forthcoming Microsoft tablet because I know Microsoft products make Hospital health IT departments salivate.

We commented last year how many Hospital IT cite physicians using the iPad at work as their biggest headache. I knew as soon as Microsoft launched a tablet Hospitals would gravitate towards the product, no matter if it was good or not — but because of “legendary” Microsoft enterprise solutions.

I was set to start the countdown to purgatory — when I would be forced to use a Microsoft tablet in the Hospital wards.

But after reading about the event, and looking at videos and pictures of the Surface, I felt an odd emotion — excitement. Microsoft has actually laid the framework to a compelling device.

In an odd turn of events, their lack of hardware expertise has actually benefited them in the post-PC ear. Whereas Apple has to make sure they differentiate their hardware product lines, Microsoft does not. Apple has to make sure users purchase a tablet and a laptop, doing this by limiting the scope and functionality of iOS, along with hardware limitations — Microsoft doesn’t care. They are more than willing to include a robust OS — Windows 8 — with included HDMI and USB ports.

All these features have enabled Microsoft to bring a unique device to the market, one that truly defines the Post-PC era.

There are 5 reasons why doctors might actually embrace the Microsoft tablet:

Hardware is a big deal to physicians and one of the reasons why we prefer the iPad. Last year I wrote the following about Apple products:

“The feeling of a Macbook Pro confers this – just compare the aluminum unibody hardware build to the majority of plastic casing laptops – it’s a completely different experience. This type of comparison extends into the smartphone and tablet arena as well. The iPad and iPhone 4 have a clearly superior build quality than their competitors”

According to journalists at the event, the tablet delivers the feeling of superior build quality — crucial for physician adoption. Microsoft talked at length about how the case has a “VaporMg” finish to deliver a clean and sturdy look.

Having a keyboard is a necessity if you want to use your iPad in the medical arena. It is impossible to do meaningful charting of patient histories using a touch screen — especially when it takes up half your screen’s real estate. The Microsoft Surface has a keyboard that doubles as a case, easily increasing your level of productivity.

In the past we have discussed extensively why doctors are fans of stylus input. We have written extensive reviews of various stylus pens for the iPad. Microsoft’s inclusion of a stylus pen that blocks the input from your wrist while making annotations is another boost from a productivity standpoint.  This enables physicians to write quick annotations on patient charts, and also their personal medical literature files.

While HDMI and MicroSD ports can be added on as accessories to the iPad, no one is holding out hope for USB 2.0. In the medical field USB 2.0 is essential for peripheral devices, such as ultrasound probes.

So, why is USB 2.0 host support essential if you want to connect an ultrasound probe to a smart phone? At a basic level, the probe has to be able to draw power from a mobile device.

Many other medical peripherals function in the same manner, and I wouldn’t be surprised if medical device companies target the Surface as an ideal pairing device for their products.

One of the biggest advantages of the Surface is the operating system. A mobile friendly version of Microsoft 8. Having a full functioning OS on a small form factor will increase productivity for medical professionals. Enabling us to run programs we would otherwise not be able to.  A mobile specific app or web interface is no longer required to run software. 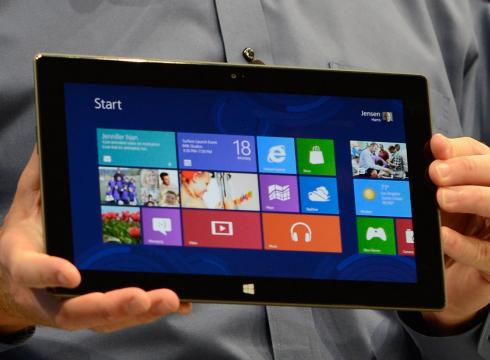 It still remains to be seen if Microsoft can continue to impress when the Surface actually launches. I remember being this excited when Palm launched the Pre, only to be disappointed with their quick downturn. Obviously, Microsoft is a completely different machine with lasting power and funds to back it up.

One thing is for sure though, the Surface has the opportunity to be relevant in the hospital space, and my fellow doctor’s can stop being scared now.  Personally, I can’t wait to try one out.